Home Education All About Birthstones

One doesn’t need to be born into royalty or be a Biblical figure to enjoy birthstone jewelry. These simple, personalized pieces make for great gifts and hold a lot of meaning and tradition behind them. Whether it’s a birthday, holiday, Mother’s Day or any other special event, a piece of jewelry featuring the right rock is always a good choice.

The History of Birthstones:

Birthstones have their roots in the Bible’s book of Exodus, where Aaron, the brother of Moses, has a breastplate embedded with 12 gemstones to represent the 12 tribes of Israel. Pulling from this, Jewish historian Titus Flavius Josephus connected the Aaron’s 12 gemstones to the 12 months of the year. People then kept 12 different stones and wore a different one each month, believing that each stone corresponded to one of the 12 apostles and, when worn during the ascendancy of each of the 12 zodiac signs, the stones would be charged with power.

Scholars disagree about where exactly the idea of wearing the stone that corresponded to one’s own astrological sign all year round originated, but the Gemological Institute of America asserts that it was born in Germany in the 1560s. The official list of birthstones varies by culture: in English-speaking countries, two lists exist, representing the traditional and modern tastes of jewelers. The traditional list takes root in Polish traditions and corresponds to poems written about each month of the Gregorian calendar. The modern list was put together in 1912 by the National Association of Jewelers and has been updated periodically since then by various gemological institutions.

The following is the most updated version of the modern list of birthstones. These days, people wear one birthstone—the one that corresponds to their birth month—all year round, but that certainly shouldn’t stop you from enjoying the other precious stones on this list and adding a little extra sparkle to your every day life! 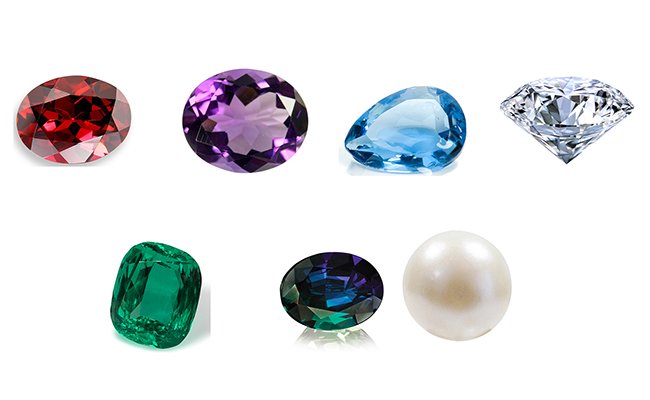 January: Garnet (top row, left)
January’s birthstone is the deep red garnet. The stone is believed to bring light and provide guidance during difficult times, as well as promote self-esteem, give energy, and protect the wearer during travel.

February: Amethyst (top row, second from left)
The soothing purple shade of amethyst promotes peace, serenity and self-control. As such a peaceful stone, it’s no surprise that amethyst is used in the ring the Pope always wears. The stone also promotes sobriety, coming from the greek word “amethystos,” meaning sober.

March: Aquamarine (top row, second from right)
It used to believe that drinking water in which aquamarine had been soaking would cure heart, liver, and stomach diseases. Sailors believed the stone would protect them at sea, so much so that they’d wear aquamarine pendants engraved with the likeness of the sea god Neptune on their travels. The stone is thought to promote courage, happiness and mental clarity.

May: Emerald (bottom row, left)
The emerald is a stone of passion, beauty, love and fertility because of the Ancient Romans’ association of the stone with Venus, the goddess of love and beauty. Emerald is also believed to promote wisdom and patience in its wearer.

June: Alexandrite & Pearl (bottom row, middle and right, respectively)
The Ancient Greeks believed that Aphrodite’s tears of joy hardened to become pearls. Wearing pearls has a calming effect that allows for creativity. Alexandrite’s colorful and mysterious brilliance promotes a sense of wonderment and improves intuition and imagination in its wearer.

July: Ruby (top row, left)
The ruby is a highly valuable stone that traditionally offered protection from evil. In modern times, the deep red stone symbolizes love and passion. The stone is also believed to harbor a lot of energy, promoting enthusiasm, success, and strength.

August: Peridot & Spinel (top row, second from left and second from right, respectively)
Peridot, sometimes called the emerald of the evening, is believed to protect the wearer from nightmares because its incredible luminescence makes it appear as if it glows on its own. Spinel is often confused with ruby, but comes in a wide variety of colors. The stone is believed to protect the wearer and relieve sadness.

September: Sapphire (top row, right)
Sapphire, known for its deep blue color, also comes in a wide variety of colors. The stone has a history of being a favorite for royal and religious figures, as the stone symbolizes purity, wisdom, loyalty and faith.

October: Opal & Tourmaline (bottom row, left and second from left, respectively)
Opal is thought to promote confidence while warding of evil. The stone symbolizes creativity, innocence and hope. Tourmaline comes in many colors and is believed to protect the wearer from harm and promote creativity.

November: Citrine & Topaz (bottom row, middle and second from right, respectively)
Topaz is a stone that symbolizes love and is also said to give strength and protection to travelers. Yellow topaz, especially, is thought to heal the body and mind. Similarly, citrine was used by travelers who thought it was a protection from snakes and other forms of evil. Now, the stone is associated to success and prosperity.

December: Turquoise (bottom row, right)
Turquoise is a symbol of love, success, and good fortune. It is believed that turquoise keeps away evil spirits while protecting the wearer from harm and relaxing the mind.