As with many other “firsts” in the world of horology, details about who exactly developed the first chronograph watch have been lost in the mists of time, but one thing is for sure: Swiss watch manufacturer Zenith beat everyone else to the punch when it came to making the first fully integrated automatic chronograph. The movement, dubbed El Primero, debuted in 1969 and, to this day, remains the most precise series-made chronograph in the world. We’re taking you inside this iconic caliber, from its illustrious history to its first-class technological specs.

The El Primero took a total of seven years to develop from drawing board to final product. It was originally conceived in 1962 and was intended to launch on the 100th anniversary of the Zenith company in 1965. It was to be the world’s first integrated automatic chronograph as well as the world’s most accurate one. To make matters more difficult, this movement was to be miniaturized to fit a date complication.

Zenith’s engineers and watchmakers accepted the challenge head-on. Albeit finally releasing the watch four years after its original intended launch date, the team managed to create a groundbreaking caliber that was so finely honed that its core design would never have to be upgraded, even almost 50 years later.

The 1970s saw the watchmaking industry buckle under the weight of the Quartz Crisis, and it was then that the El Primero movement was briefly retired so that the brand could move into producing quartz watches and compete with the rest of the market. Thanks to watchmaker Charles Vermot, who kept the original plans and tools needed to produce Zenith’s mechanical calibers, El Primero was resurrected in 1984, once the crisis settled and interest in mechanical watches bloomed once more.

In 1988, Rolex tapped the El Primero movement for use in the collector favorite Daytona chronograph. El Primero continued to power Rolex Daytonas until 2000.

The El Primero caliber has since earned its own collection within the Zenith Manufacture family. Each watch features different complications like a minute repeater or a gyroscope module but never compromises on the precise composition and accuracy of the original El Primero movement. 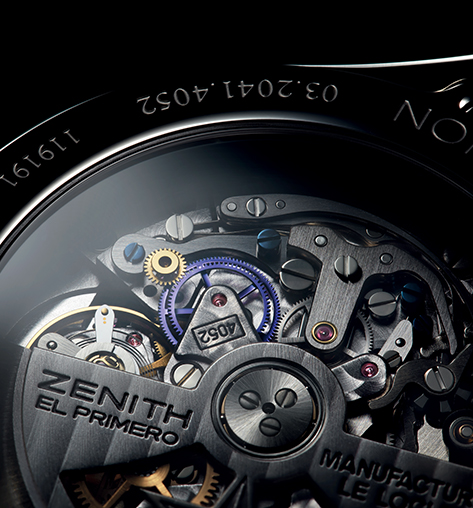 The movement of the Zenith El Primero,

The El Primero caliber did not earn its title as the world’s most precise series-made chronograph for nothing. In the seven years that Zenith’s teams took to develop the movement, they managed to create a design that pairs a special cadence of 36,000 vibrations per hour with seconds and chronograph hands that move 10 times per second: these features afford the chronograph the accuracy to measure time down to 1/10th of a second.

Despite the integration of that high vibration frequency, which normally cuts down a watch’s power reserve considerably, Zenith succeeded in preserving the power reserve of the El Primero caliber. This watch runs for 50 hours without being wound.

Each El Primero watch takes nine months to produce. A series of 2,500 operations are performed by 300 expert pairs of hands and 18 different metals are used to put the timepieces together, and in total, 23 different models carry the El Primero caliber.

This movement is unlike any in the world: its accuracy, efficiency, and prestige are sought after by the most elite watchmakers, and its designs inspired countless others from different manufactures all over the world. The Zenith El Primero is truly one of a kind.

To learn more about the history of the Zenith brand, visit this post on our blog, the Loupe!