Why are diamonds so expensive? Why are they considered so valuable? We take a hard look at the myths surrounding diamonds and their cost to get to the bottom of just what makes them so expensive.

MYTH #1: Diamonds are expensive because they’re so rare.
Diamonds are not particularly rare. In fact, compared to other gemstones, they’re the most common precious stone found.

Generally, the cost per carat (or weight of a gemstone) is based upon a stone’s rarity; the rarer the stone, the more expensive. Therefore, rubies, emeralds and sapphires are much rarer and, in turn, far more expensive than diamonds.

MYTH #2: The bigger the diamond, the more it costs.
While this is not entirely wrong, it’s not entirely right, either. The size or carat weight of a diamond is only one factor in calculating the value of the diamond.

Known as the “Four C’s,” carat, clarity, color and cut collectively inform the price of a diamond. No single characteristic outweighs another; they all contribute and influence the final retail value. For example, you can have a whopping 10-karat diamond, but, if it’s clarity is low, it does not guarantee the huge stone will be worth more than a smaller sized diamond with perfect clarity. To learn more about the Four C’s, read our post here. 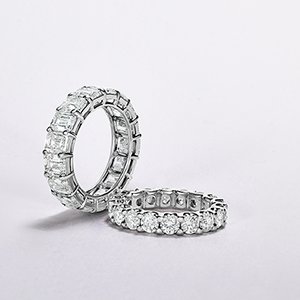 MYTH #3: The world’s diamond supply is depleting which is why the price of diamonds is increasing.
It is true that fancy colored diamonds (like yellow or rose pink diamonds) are in short supply. Some experts estimate that colorful diamonds will be depleted in a decade.

However, white diamond supply is not really at risk. Historically, diamonds were very hard to find. But more and more mines have opened up to reveal a greater global supply of diamonds.

Additionally, man-made diamonds are growing in popularity. Indistinguishable from traditionally mined diamonds, these lab-manufactured diamonds are less expensive and considered an environment-friendly alternative to mining.

MYTH BUSTER: So, what makes diamonds so valuable? It’s simple: market demand.
For centuries, diamonds have been a sign of power, wealth and status. The stone was a rare find and therefore was worth more.

However, in the 1800s, a veritable diamond trove was unearthed in Kimberly, South Africa. This newfound mine had the potential to flood the market with diamonds and bring down the cost for the precious stone. To prevent too many diamonds from hitting the market, De Beers quickly intervened, bought up the mine and maintained tight control over the global diamond supply. De Beers released only enough diamonds to meet annual demand. This gave the illusion that diamonds were exceedingly rare. In turn, the seemingly-limited supply inflated the cost of diamonds.

Throughout the 19th century, De Beers effectively maintained a monopoly on the global diamond mines: the cartel would stockpile diamonds, limit supply, and drive up demand and costs.

De Beers also began an aggressive marketing campaign to promote diamond engagement rings. The brand pushed out the longstanding tradition of ruby and sapphire engagement ring and replaced it with an overwhelming demand for diamond rings. This fever-pitch demand, coupled with the De Beers-controlled limited release of diamonds, increased the overall cost of diamonds.

But, before you admonish yourself for being duped by clever marketing propaganda, understand that diamonds have long been considered a valuable stone. Ancient Greeks revered the indestructible stone and believed it to have mystical powers. For centuries, diamonds have been worn by royalty and noblemen as a status symbol. And diamond engagement rings have been traced all the way back to 1477 when the Austrian Archduke Maximilian proposed to Mary of Burgundy with a diamond ring.

So today’s fervor for diamonds is not a new phenomenon by any means. Diamonds are undeniably a dazzling, brilliant and mesmerizing stone and worthy of awe.