Home Education What is a Horological Smartwatch?

When smartwatches sales started to pick up in 2015, some worried that another Quartz Crisis was descending upon the watch industry. (Quick history review: the Quartz Crisis refers to the economic downturn that befell the Swiss watch industry throughout the 1970s and 1980s with the introduction of inexpensive and more accurate quartz watches from Asia. Swiss brands lost a lot of market share to the Japanese watch brand Seiko and, even after a handful of bailouts by Swiss banks, still shuttered their doors.)

In this modern edition of history repeating itself, some speculated mechanical watches would become entirely obsolete as the Apple Watch became a ubiquitous accessory, donned by current watch- and non-watch-wearers alike. But Swiss watchmakers didn’t seem all that concerned with the growing popularity of smartwatches.

Because, unlike the Quartz Crisis where the industry was largely playing catch-up to its Asian competitors, a handful of leading Swiss watch brands were already putting their finishing touches on their own novel take on smartwatches: the horological smartwatch.

What is the Horological Smartwatch?
In short, the horological smartwatch marries traditional watch design and smartwatch wearable technology. It’s essentially a smartwatch dressed up (or disguised, depending on how you want to look at it) as a classic fine watch. 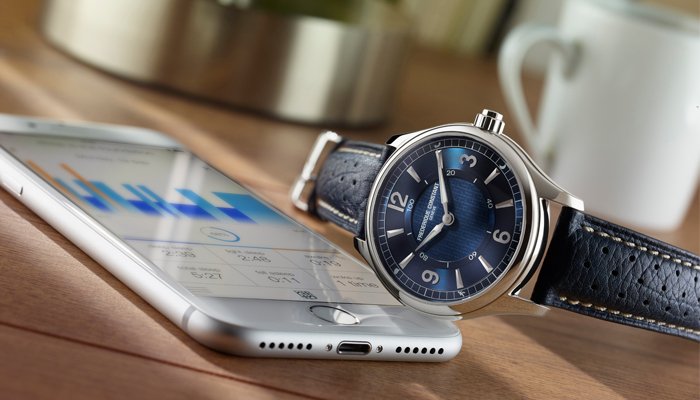 A Brief History of the Horological Smartwatch
In 2015, Manufacture Modules Technologies (MMT) was founded as a joint-venture between Silicon Valley’s Fullpower Technologies (the company that developed the MotionX technology found in the fitness trackers UP by Jawbone and Nike Fuelband) and Switzerland’s Union Horologère Holding, the parent company of Alpina and Frederique Constant. In turn, MMT and these select Swiss watch brands set about developing smartwatches that tapped into the quintessential look and feel of a sleek mechanical watch but incorporated smartwatch technology.

Frederique Constant focused on preserving the overall design’s clean aesthetics: a sleek dial, diamond-cut hands, applied hour markers and hand-polished cases. MMT, meanwhile, focused on how to improve the battery life and how to convert the traditional dial into an unobtrusive piece of wearable tech. The result was the horological smartwatch. 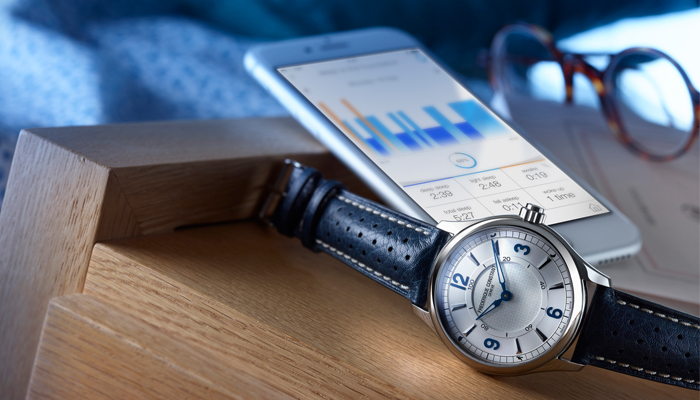 And, as for the original design, unlike a typical smartwatch that uses a digital display, Frederique Constant’s Horological Smartwatch uses its hour and minute hands and crown to read out what percentage of your daily activity goal you’ve reached. The horological smartwatch pairs with the MotionX-365 app to give you a more detailed look at your activity and sleep patterns.

Later updates to the horological smartwatch would include a vibrating motor that, via your Bluetooth-enabled smartphone, notifies you of calls or text messages and can automatically update your local time zone.

Looking Ahead in the World of Horological Smartwatches
While other mid-level and fashion-brand competitors have entered the smartwatch circle (including TAG Heuer and Montblanc), Frederique Constant remains the leader in Swiss smartwatch manufacturing, shipping over 16,000 horological smartwatches in 2015 alone.

MMT later broke off as an independent smartwatch and software company in 2016 when the Frederique Constant group was acquired by Citizen. MMT’s ultimate goal is to license out its MotionX-365 horological smartwatch platform to any Swiss watch brand that wants to fold this technology into current and future collections, expanding wearers’ overall selection of smartwatch styles.

While these horological smartwatches are not necessarily meant to compete head-to-head with, say, the Apple Watch, they do offer a sleek alternative for watch wearers who appreciate that classic Swiss look but do not want to sacrifice the added benefits of smartwatch tech.