Home Education The Smartwatch Evolution, And 5 Reasons Why It Has Not Made Watch Collecting Obsolete

Despite the popularity of smartwatches, they will never make watch collecting obsolete.

Time is the single constant in life. We all strive to track time, measure time, make the most of time, or, sometimes, to stop time. This may well be why clocks and watches play such a significant role in our lives. They are the devices by which we witness the seconds, minutes, hours and days move forward. Of course, let’s get something straight right up front: Nobody needs a watch. With clocks on our computers, dashboards, cell phones, and countless other devices, we can read the time in an instant. Additionally, the onslaught of smartwatches has led many a consumer to don a timepiece that is more of a connected device than a traditional watch. But don’t let those smartwatches fool you. They are not the death of the traditional watch, but instead, the catnip. Let me explain.

Interestingly enough, the Apple Watch, unveiled in April 2015, was not the advent of the smartwatch. In fact, the smartwatch had been invented in a primitive form nearly 20 years earlier. Quietly, certain technology companies and even watch brands were creating “smart” watches in the late 1990s. In fact, Seiko unveiled its Message Watch in 1997 as a sort of wrist computer, and, in the ensuing years, anyone visiting the annual Consumer Electronics Show could find an “intelligent” computer sort of watch being offered year after year that could show messages and display various information. Over the years, we witnessed brands such as Pebble and Martian make their debut. However, there was no fanfare surrounding these first few generations of smartwatches, and most watch pundits in the industry considered the smartwatch to be a minor player.

However, that was all about to change. In 2015 when Apple’s smartwatch hit the market, it did so with a boom. Big announcements were made globally, and the anticipation by Apple followers and techies had mounted to the point that there were tens of thousands of people around the world standing on waiting lines.

The Movado Museum Sport Motion watch made its debut late in 2015.

The traditional watch industry could not deny that a new wave of technology was crashing in on their territory. At first, there was a quiet panic among traditional watch brands. Could the new generation of connected watches – those that teamed with sophisticated platforms such as Intel and Google – be their downfall? Having struggled with (and nearly been defeated by) the evolution of quartz technology decades earlier, some watch brands opted to embrace the smart concept. They would not resist smartwatch technology only to be left in the dust by the rest of the industry again.

As such, some watch brands, including big names such as Louis Vuitton, Breitling, Montblanc, Movado, Guess, Fossil, and others have – in the past few years – unveiled their own connected watches, and certain brands such as TAG Heuer, Hublot, and Frederique Constant, have released hybrids that feature real dials but with connected capabilities via alternative dials, or that have modular construction and can later be converted to a traditional watch. 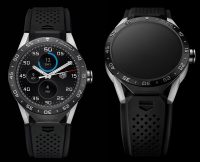 TAG Heuer has had several generations of connected watches but has never abandoned traditional watchmaking.

However, not one of the traditional watch brands embracing the smartwatch concept has ever abandoned production of the traditional watch. That may be because once the initial panic and knee-jerk reaction to the massive influence of the Apple Watch subsided, a new reality took hold. These watches are not a threat to the survival of the luxury watch industry. Instead, they are a channel for growth.

While the smartwatch has definitely reached outside of the tech world and onto the wrists of many consumers whom the watch world once thought would never be interested, it simply cannot obliterate the traditional watch. In fact, once the consumers who embrace the smart watch – those with active lifestyles, techies, and others – have been wearing one for a while, they will most likely become hooked on the idea of looking to the wrist for information – including time indication. Discerning smartwatch wearers will become bored with the limitations (chargers, battery life, etc.) of the watch, and maybe even with the singular look of a smartwatch. They will eventually aspire to own traditional watches that convey their narrative and message more precisely. Smartwatch wearers will become traditional watch collectors. 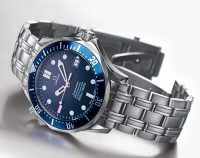 Omega Seamaster has been the watch of choice for recent James Bond movies.

1. Traditional watches have their own raison d‘être.

The point of a traditional watch is to tell time in a manner that is consistent with one’s own personal narrative. While smartwatches are fairly singular in design, require charging and have very limited battery life, a traditional watch faces none of those obstacles. Sure, a quartz watch may need a small battery replacement in five years or so, but there is nothing in a traditional watch that tethers someone to an outlet. In fact, traditional timepieces are quite the opposite. Their entire reason for being — to display the time – enables great innovation in terms of design. Watch brands eager to display time in new and different ways have turned to three-dimensional architecture, various creative case shapes or dial looks, and unusual materials or even noble materials to tell their story. Because many aspects of life often inspire traditional watch designs, there are so many choices of genres on the market, from aviation watches to artistic watches, chronographs and more. I highly doubt that the sophisticated, meticulous character of James Bond would select anything other than a mechanical watch (in fact, Omega has been the watch of choice for James Bond movies for years) to accessorize his dapper attire. Even Tony Stark (aka Iron Man) wears a traditional Urwerk mechanical watch in his most recent films, most likely because the most reliable “gadgets” are mechanical.

2. Watch collecting is an art.

While watches enable you to tell your own story in terms of colors, materials, design appeal and more, collecting watches also helps you create a complete story about yourself. Today, collecting watches has become a true art, an expression of who you are and what you like. Today’s collector typically buys at least one watch a year, sometimes many more, depending on the price of the watch and annual income. This may be because there is something very special about the act of watch collecting: from going into stores to try on watches, to educating yourself on line about vintage and pre-owed pieces, following the auctions and shopping on line. There is personal gratification in comparing the virtues of a watch, its design, its function and prices, whether or not it will hold the value and more that makes the process of collecting more interesting. Believe me, when it comes to watch collecting, there is a watch out there for every wallet size, including million-dollar watches for those with a wallet the size of a house.

Traditional watches like Panerai Luminor allow for one to make a personal statement about hobbies and interests.

Inside a traditional mechanical watch are hundreds of tiny parts that work together via teeth and gears and wheels in a fascinating way to track time perfectly. What’s more, many of today’s watches offer a variety of incredibly useful functions (ok, not Instant Messaging, but then you have a Smart Phone for that) thanks to advanced mechanics and technology. You can opt for a watch with a moon phase display that is accurate for 122 years or more, or for a watch with a perpetual calendar, multiple time zones, and even the ability to calculate speed or distance. Today’s dive watches can go to incredible depths that no smartwatch could fathom, and pilot watches fight magnetism and its effects on accuracy with ease.

Easily one of the main reasons watches have enjoyed collector status for centuries is craftsmanship. Sometimes, it is difficult to believe that an item slightly larger than an inch in diameter can hold hundreds of parts that work together like a carefully orchestrated dance of precision. Each watch has its own meticulously finished parts, often visible via an aperture on the dial or a transparent case back, lending an air of marvel to the piece. Just knowing that somewhere a single master craftsman toiled for hours hand polishing components and hand assembling a movement is enough to really appreciate the passion that goes into each watch made. Watch collectors understand and value that craftsmanship.

Watches make wonderful heirlooms for the next generations.

5. Traditional watches can be traded in, traded up or kept as heirlooms.

One of the main reasons that auctions and re-sales of second-hand watches are so strong is because watches are works of art that have a physical– and sometimes an emotional — value. It is not unusual for a parent or grandparent to pass down a watch to the next generation. Watches track time; therefore, they hold a history from the moment they make their first tick. They are often purchases that celebrate or symbolize a special event, an important moment — one that is worth holding on to and passing down to the next generation. Additionally, a traditional watch can be traded in and re-sold as a gently loved watch, so that the owner can trade up to the next level or to a different type of statement. While smartwatches may be sold on the second-hand market, they are less likely to continue to hold value because their technology becomes obsolete.  Certainly, a quartz or mechanical watch never becomes obsolete, nor does building a watch collection. Simply stated, the smartwatch will never obliterate the traditional watch or watch collecting.