Home Education 5 of the Most Expensive Ruby Pieces Ever Sold

The legendary biannual jewelry auctions in Geneva are right around the corner. With that in mind, we’re taking a look back at some of the statement gems and noble jewels that have smashed records at auction in years past—specifically, the history-making pieces that are fitted with rubies.
Here are five of the of the most expensive ruby jewelry pieces ever sold at auction and a little information about each of them. 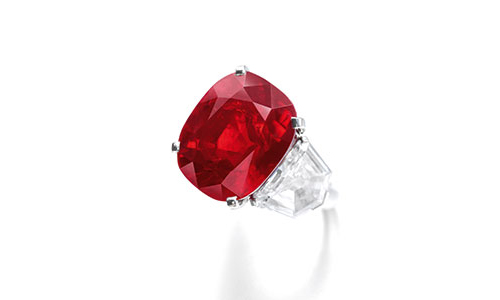 Sold by Sotheby’s at their May 2015 Geneva auction, this extraordinary ring broke records and, likely, a few hearts. The center gemstone was a 25.59-carat Mogok Burmese ruby that was accompanied by a report from the SSEF (the Swiss Foundation for the Research of Gemstones) and from Gübelin (one of the foremost gem labs in the world). The reports verify the ruby’s Burmese origin and “pigeon-blood” color and certify that there was no indication of heat treatment.

The Sotheby’s catalog noted at the time that the ruby “displays a homogeneous and richly saturated ‘pigeon blood red’ colour, which typifies the finest of these gems. The depth of colour, combined with a high clarity and brilliance, all contribute to the beauty of the gem. The shape and finely proportioned cut provides vivid internal colour reflections.”

The ruby was set into a platinum signed and numbered Cartier mounting and flanked by shield-shaped diamonds weighing 2.47 and 2.70 carats each. 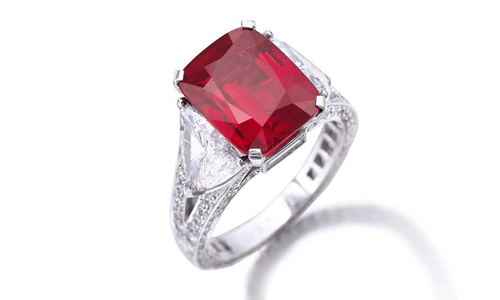 Another expensive ruby ring sold at a Sotheby’s Geneva auction is the Graff Ruby, which was sold back to an earlier owner – Laurence Graff – in November of 2014. The cushion-cut, Burmese ruby, also of “pigeon blood red” color, weighs 8.62 carats and is set between triangle-shaped diamonds in a white metal mounting accompanied by bead-set round brilliant cut diamonds. 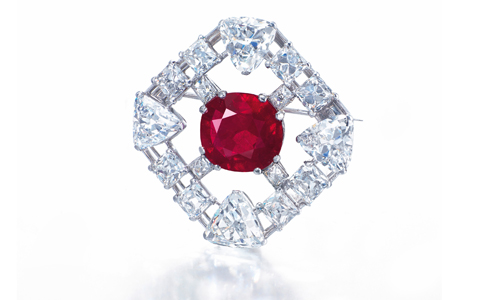 At a November 2014 auction held by Christie’s in Hong Kong, an incredible signed Cartier platinum, diamond, and Burmese ruby brooch fetched a whopping $8.4 million. The brooch contained a 10.10 carat Mogok Burmese ruby (“pigeon’s blood” in color), and, according to the Christie’s description, the ruby “exhibits a saturated and vivid red colour combined with a fine purity and a very attractive cutting style. The tiny inclusions found by microscopic inspection represent the hallmarks of rubies from the classical ruby mines in Mogok Valley in Burma.”

The brooch was also outfitted with four triangle-shaped white, natural diamonds in its corners and twelve additional square-cut diamonds throughout.

In May of 2012, a 32.08 carat ruby set into a gold Chaumet ring with trapeze cut side stones hit the auction block. The ring fetched almost 7 million dollars at Christie’s Geneva auction that year, and for good reason. The Patiño Ruby once belonged to Luz Mila Patiño, Countess du Boisrouvray and daughter of Bolivian tin tycoon Simon Patiño, who was also related closely to Prince Rainier of Monaco. Countess Patiño was known for her jewelry collection, which was largely auctioned off by her daughter to use for charitable purposes. 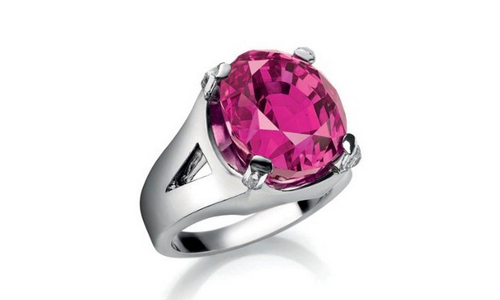 Once belonging to His Highness Khengarji III, the Maharaja of Kutch, the Queen of Burma ruby ring was sold at the November 2014 Christie’s auction in Geneva. The pinkish-red, oval-shaped Burmese ruby weighed approximately 23.66 carats and was claw-set into a platinum and baguette diamond platinum signed Cartier mounting. This marvelous specimen was sold at a for just over 6 million U.S. dollars.