Home Brand Spotlight How to Spot a Fake: Hermès Bracelets

Hermès boasts beautifully simplistic designs with an incredible attention to detail. However their minimalist style makes them comparatively easy to forge. Be on the lookout for these seven telltale signs that your Hermès bracelet is a counterfeit.

Here are some examples of fake Hermès jewelry: 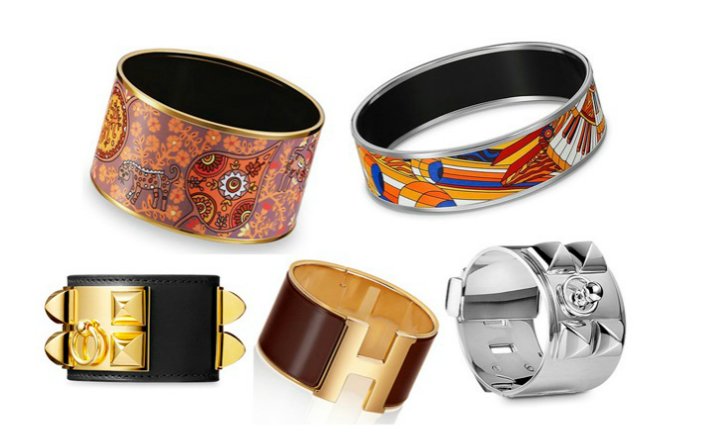 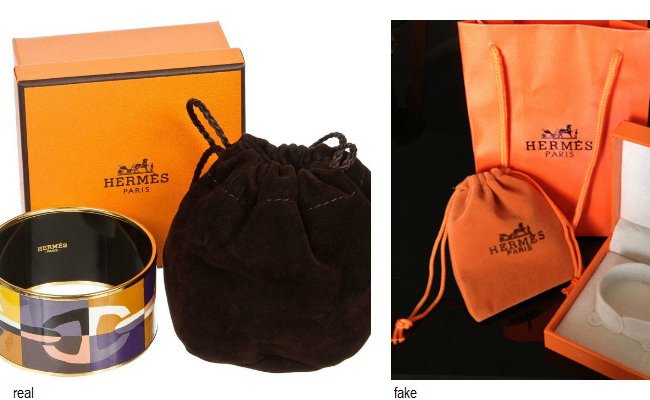 If the listing includes the original packaging, it’s worth taking a careful look.

The ubiquitous Hermès orange may seem like such a distinct color but it’s remarkably hard to distinguish it from similar shades that may be only a hue away from the real thing. (For comparison, the closest approximation to Hermès Orange that we can find is Pantone 165C.) But an immediate tip-off is a box looks too brown (like a dull orange) or overly vivid.

Also the logo should of course be straight and centered on the packaging and should be printed in a chocolate brown, not black.

And if you’re lucky enough to personally handle the packaging, run your fingers over the top to feel for a softly pebbled texture. A smooth or paper-like texture is indicated of a fraudulent box.

A word of caution here: just because the box is real, that doesn’t necessarily mean what’s inside is authentic. So factor the packaging into your judgement but do not rely on it solely to deliver the final real versus fake verdict.

2. Made in Austria versus Made in France

Historically Hermès enamels were manufactured only in Austria and stamped accordingly. Contemporary Hermès enamel bracelets (from roughly 2010 on) are produced in France and marked as “Made in France.” Although accounts of the exact dates for when this transition from Austria to France production vary, it’s most helpful in determining the authenticity of vintage pieces.  So if an item is listed as vintage but is stamped with “Made in France” it’s most likely a fake.

Fake Hermès bracelets tend to run smaller than authentic pieces. Cross-reference the dimensions with those listed on Hermès’ website. Also double-check the weight of the bracelet. Because bogus bangles are made of far less expensive materials (like plastic or resin), forgeries are noticeably lighter.

All Hermès leather goods are hand sewn. But there is a fine line though between the natural imperfections that come from sewing by hand and the rigorous standards set by Hermès. Closely examine the leather stitch; the stitching may not be flawless but it should be pretty close to perfect, evenly spaced and no sloppy or loose ends. 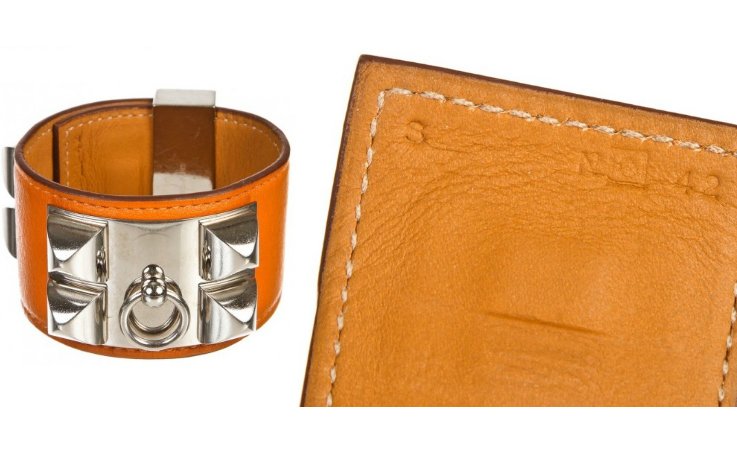 Hermès employs a date code on all its leather goods. If you know what year your bracelet is from, you can verify its date code against these three key eras.

And like the Made in Austria versus Made in France marks, these codes are a way to know if your bracelet is indeed vintage—or misleadingly labeled as such. 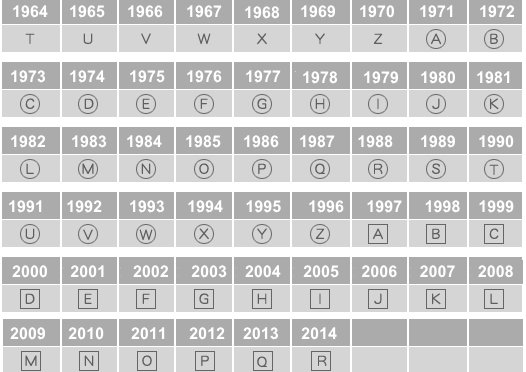 Hermès is not a brand to cut corners, so when they produce their enamel bracelets like the Clic Clac, they set a single, solid piece of enamel into the metal framework. It’s a costlier and labor intensive process than the counterfeit approach which simply involves pouring resin into the framework. The biggest clue in deciphering a real Hermès bangle are in the softly rounded edges of the enamel. Counterfeit bangles’ resin meanwhile will be flat.

If you’re able to handle the bracelet in question, try opening and closing the piece. If it has a hinge like on the Hermès Clic Clac bracelet, it should open smoothly and cleanly. If you’re putting extra tension on it to pry it open or undo the clasp, it may not be an authentic Hermès Bracelet. For the Hermès Collier de Chien bracelets, the center O ring should be free to spin and move but without a visible seam. Stationary O rings or large gaps between the O and its securing hardware are strong indicators it is not real.

If you have further questions regarding TrueFacet’s authentication process, contact our concierge representative here.