Home Education The Sinister and Dark Curse of the Hope Diamond

Widely considered to be the most famous diamond in the world, the Hope Diamond seems to have brought forth many things, but hope wasn’t one of them. The 45.52 carat steel blue diamond has intrigued the world since its discovery centuries ago. Legend has it the diamond came from the eye of a sacred idol known as Hanuman, the Hindu monkey god, found in the coleroon River in India. According to the legend, it was taken from the statue by a French adventurer-jewel trader around 1662, Jean Baptiste Tavernier, and renamed The Tavernier Blue.
This was the start of the fabled curse, which foretold bad luck and death, not only for the owner, but for all who touched it. 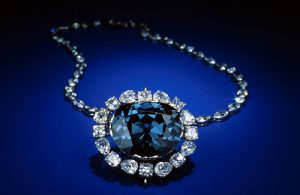 Tavernier purchased the stone and smuggled it to Paris, where he later sold it to King Louis XIV. The king’s master cutter and court jeweler, Sieur Pitau, recut the Tavernier Blue to enhance its beauty with 63 new facets that equaled 69 carats. The cutting took two years. It was recorded in the royal inventory and renamed the French Blue. Louis XIV had it set in gold and wore it simply from a ribbon hanging from his neck or in a brooch.

When King Louis XVI and his wife, Marie Antoinette, were imprisoned after the outbreak of the French Revolution, the crown jewels were put in a warehouse, publicly exhibited, and then, in September 1792, stolen over the course of five days. On January 21, 1793, Louis XVI was guillotined. Nine months later, on October 16th, his wife Marie Antoinette was also guillotined, and these beheadings are commonly cited as one of the most prominent results of the diamond’s “curse.”

The French Blue disappeared for a while, only to turn up 20 years later in London in 1812, and renamed the Hope Diamond after the Hope family who owned it for most of the 19th century. It stayed in the Hope family until descendant Lord Francis Hope sold it in 1901 to pay off the debts of his lavish lifestyle. Francis bet badly on horses and business enterprises. He lost his fortune and his wife, and, after a series of court cases, was allowed to sell the Hope Diamond to Joseph Frankel’s Sons & Company. Frankel’s and Francis Hope both died in poverty, and some believe that this was because of the Hope Diamond curse.

The Hope Diamond was finally sold, at a bargain price, to other diamond dealers, coming to the Cartier brothers in Paris.

In 1911, the diamond was purchased by Evalyn Walsh McLean, a young Washington socialite heiress who bought the Hope Diamond from Cartier for $185,000. Cartier may have embellished the ‘cursed by a Hindu god’ story in order to sell the diamond to the immensely wealthy Evalyn. Sadly, McLean’s later life provided fodder for more rumors surrounding the cursed diamond. During that time, her young son died in a car accident, her daughter committed suicide, and her husband was confined in an insane asylum.

Now, is the diamond curse a karma inspired event for sacrilegious theft or are the unfortunate events that befell its owners merely a string of coincidences? Was Pierre Cartier embellishing the story of the curse to pique Evalyn Walsh McLean’s interest in buying the diamond?

Mrs. McLean’s jewelry collection, which included the Hope Diamond, was purchased by Harry Winston Inc. of New York. The Hope Diamond was shown at many exhibitions and charitable events, before being donated to the Smithsonian, and moved onto a rotating pedestal inside a cylinder made of bulletproof glass, casting its spell over seven million visitors a year. 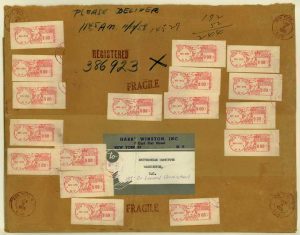 Harry Winston’s Registered Mail package used to deliver the Hope Diamond to the National Museum of Natural History- he sent it to the museum by ordinary registered post. 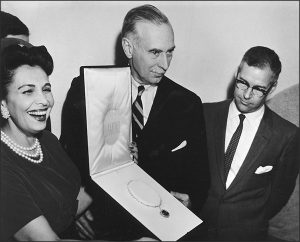 Mrs. Edna Winston, wife of the donor; Leonard Carmichael, Secretary of the Smithsonian; Dr. George S. Switzer, Curator of Mineralogy, at the formal presentation of the Hope Diamond to the Smithsonian on September 10th, 1958