The Omega Speedmaster has been an integral part of the space missions since the great Space Race began in 1955. Since it became officially NASA-certified, the Speedmaster has been worn by history’s greatest astronauts and aboard the most groundbreaking missions including Apollo 11 and Apollo 13.

We take a look at how the Omega Speedmaster transitioned from being a pilot’s watch to being the first watch on the moon and how it saved the lives of the astronauts aboard the Apollo 13.

Why Chronographs?
In the early 20th century and with the rise of flight travel, chronograph watches (or watches with a stopwatch) were specially designed for pilots. The pushers that started and stopped the stopwatch and the later addition of a rotating bezel allowed pilots to quickly calculate flight time, wind speeds, and fuel levels mid-air. Soon, chronographs were universally worn by commercial and military pilots and their flight crews.

So, as NASA was ambitiously preparing to launch a man into space in the late 1950s, it was decided that only an intrepid test pilot could endure the foolhardy mission. In turn, the chronograph was expectedly adopted as a part of the pilot-turned-astronaut’s essential equipment.

How Omega Became the First Watch in Space
Starting in 1955, the United States was in an aggressive Space Race with the Soviet Union; the Cold War rivals doggedly flexed their power and competed to be the world’s best in spaceflight capability. While the Soviet Union would ultimately have the honor of being the first to put a human into space in 1961, the United States raised the stakes yet again with Project Mercury which, in 1962, successfully saw astronaut John Glenn orbit the Earth three times. From there, the race to the Moon was on with the US lagging behind the Soviet Union.

As NASA was organizing its second set of human spaceflight missions, known as Project Gemini, scientists called for bids from watchmakers to design a chronograph for the astronauts. Because they were largely uncertain as to what a pilot would encounter above the Earth’s atmosphere, scientists demanded a watch that could withstand virtually every possible condition. Wristwatches were tested under extreme conditions including a temperature range of 200 degrees Fahrenheit down to 0 degrees and an acceleration from 1 to 7.25g (G-Force) within 333 seconds. (For comparison, the average fighter pilot can only endure only slightly above 5g before they blackout and lose consciousness.) 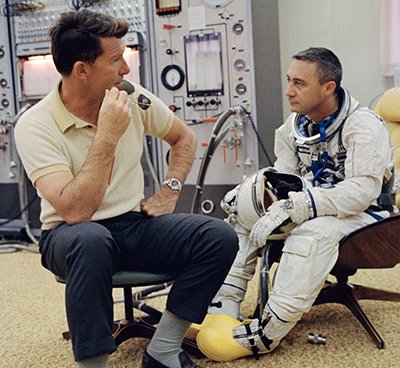 Ultimately, in 1965, Omega would beat out heavy-hitters like Rolex and Breitling, remaining within 5 seconds per day rate under the extreme conditions.

After the Omega Speedmaster was officially qualified for space flight, it was worn by astronauts Gus Grissom and John Young on their Gemini 3 mission. In late 1965, astronaut Ed White wore an Omega Speedmaster during his Gemini 4 spacewalk.

The Omega Speedmaster Aboard Apollo 11
All the Gemini missions ultimately led up to the Project Apollo, a series of manned and unmanned missions from 1969-1972 aimed at landing the first man on the Moon. This seemingly impossible goal was accomplished in 1969 with the Apollo 11 mission when astronaut Neil Armstrong took his first step on the Moon.

Omega Speedmasters were by now a part of the astronaut uniform and spacesuit. However, Armstrong left his wristwatch aboard the spacecraft when he took those first groundbreaking steps. Astronaut Buzz Aldrin, though, did wear his as he climbed down after Armstrong and, on July 20th, 1969, the Omega Speedmaster earned the title of the first watch on the moon. 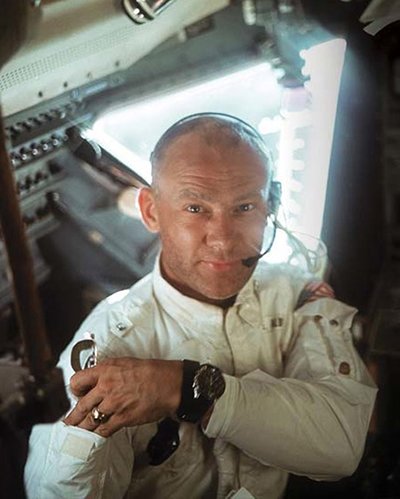 Astronaut Buzz Aldrin aboard the Apollo 11 wearing his Omega Speedmaster

Omega’s Crucial Role on the Return of the Ill-Fated Apollo 13
In 1970, Apollo 13 launched with astronauts James Lovell, John Swigert and Fred Haise—and their respective Omega Speedmasters—aboard.

Two days into the flight, astronauts felt a rumble in the spacecraft and learned one of the craft’s oxygen tanks had exploded. As the astronauts aborted their mission and powered down all nonessential systems, NASA ground control hustled to strategize a way to bring them home. Using the modest supplies on board, Mission Control organized an incredibly ingenious but precarious plan to safely re-enter the Earth’s atmosphere using the lunar module as a vessel.

The lunar module (which was designed to only travel between the shuttle and the moon’s surface) was effectively turned into a lifeboat and required manual calculations in order to safely land. Without any automatic guidance and zero room for error, the astronauts relied on their Omega Speedmaster watches to make mid-flight adjustments to their trajectory. Lovell, Swigert and Haise successfully splashed down in the Pacific Ocean thanks in large part to the accuracy of their in-flight calculations and Omega Speedmasters.

Omega Commemorates the Space Missions
Omega remains inextricably tied to the history of America’s space exploration. In turn, the Swiss manufacturer honors these moments with a handful of styles: 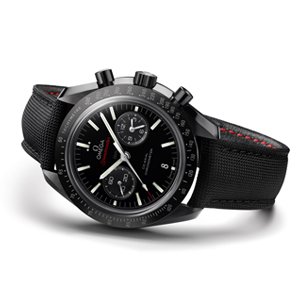 The Omega Speedmaster “Dark Side of the Moon”

The all black Omega Speedmaster Moonwatch “Dark Side of the Moon” was named after Apollo 8 mission which successfully orbited the Moon—and thus made astronauts Frank Borman, Jim Lovell, and William Anders the first humans to ever see the dark side of the moon. Later versions of the “Dark Side of the Moon” were issued in grey and white and even one with a dial made of a piece of prehistoric meteorite that crashed into Earth thousands of years ago.

The Speedmaster Apollo 11 45th Anniversary Limited Edition was released in 2014 to commemorate the historic mission’s lunar landing. For this unique design, Omega was inspired by the colors of the moon and Apollo 11 modules. The final Speedmaster features a specially designed grey-brown dial with a lightweight titanium case and 18k Sedna gold accents. 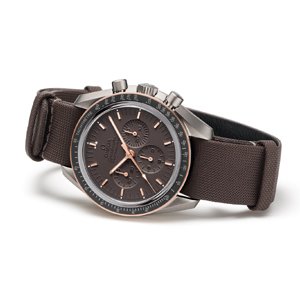 Following the safe return of Apollo 13, Omega was awarded a Silver Snoopy Award, a special honor awarded to NASA employees and contractors for their outstanding achievements and contributions to flight missions. In 2015, Omega released the Omega Speedmaster Professional Silver Snoopy Award in honor of the 45th anniversary of the Apollo 13. This Speedmaster features a small inscription on the dial between 0-14 seconds reads, “What could you do in 14 seconds?” refers to one of the mid-flight trajectory adjustments the skilled astronauts made to re-enter the Earth’s atmosphere. 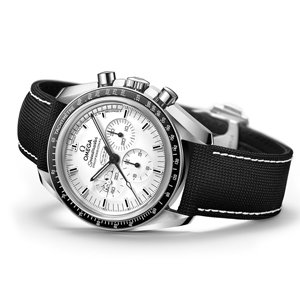 By the time of the Space Race and the awe-inspiring space missions that followed, Omega had long-established itself as a leading Swiss watch brand. However, when placed within the context of this unique time in America’s history, the Omega Speedmaster takes on a new, rich identity that enchants both new and longtime fans.