Home Education Lustrous and Luxurious: The World’s Most Expensive Pearls

It is estimated that for every 10,000 oysters harvested, only one will contain a high-quality pearl. The scarcity of natural pearls in turn makes them incredibly valuable—and incredibly well sought-after. Celebrities, jewelry connoisseurs, royals from every continent, and more have paid millions of dollars to get their hands on high-quality pearls, some of which fetched record-breaking sums. Here are seven of those fabulous pieces: the most expensive pieces of pearl jewelry in the world. 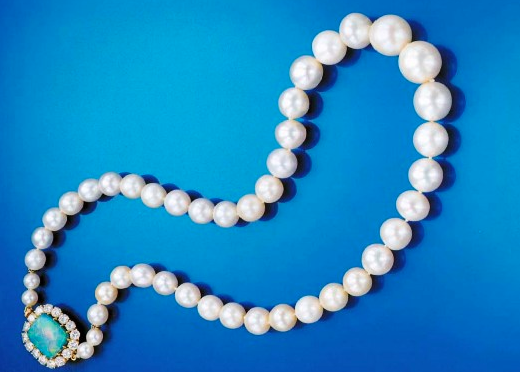 This historic pearl necklace had two rather infamous owners. The first was the doomed Marie Antoinette, the vilified queen of France who was beheaded during the French Revolution in 1793. The next tragic owner was the socialite Barbara Hutton. Heiress to the Woolworth Department Store fortune, Hutton received the necklace as wedding gift from her father in 1933. Hutton was wildly wealthy in her youth, but frivolous and careless spending throughout her lifetime would ultimately leave her bankrupt by the time of her death.

This storied necklace features 44 pearls ranging from 8.7-16.33mm with a diamond and turquoise clasp. It sold at a Christie’s auction for $1.6 million USD in 1999. 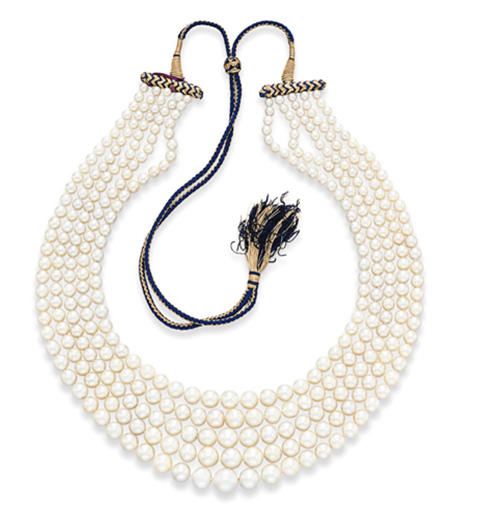 This five-strand pearl necklace includes 349 lustrous pearls, ranging from 4.1mm-11.35mm. (For comparison, the largest pearl was bigger than the width of an M&M candy.) Each pearl was tested by the SSEF Swiss Gemmological Institute who confirmed the authenticity of the saltwater natural pearls. The necklace’s comparatively modest closure is a simple blue silk cord. The necklace was auctioned in 2012 as a part of Christie’s New York Magnificent Jewels showcase. The winning bid was $1.7 million USD. 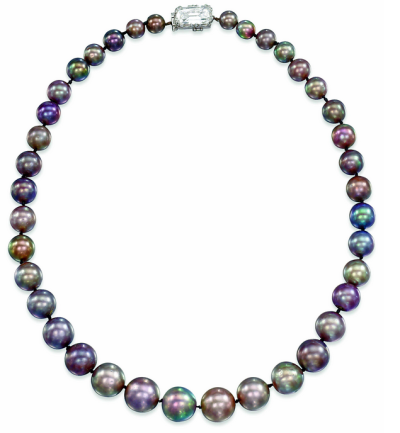 The Cowdray Pearls were originally owned by Viscountess Cowdray, Lady Pearson (1860- 1932). Her husband, Weetman Dickinson Pearson, First Viscount Cowdray, made his fortune as a construction and oil industrialist and was allegedly the sixth richest man in Britain when he died in 1927. Viscountess Cowdray was revered for her fine taste and superb collection of art, furniture, and, of course, fine jewelry.

This pearl necklace features 38 grey pearls and a rectangular diamond clasp. The pearls range from 6.8-11.4mm in diameter and are brown to grey with purple and green overtones in color to give it even more dimension. This stunning necklace fetched over $3.35 million USD in 2012 when it was put up for auction at Christie’s in London. 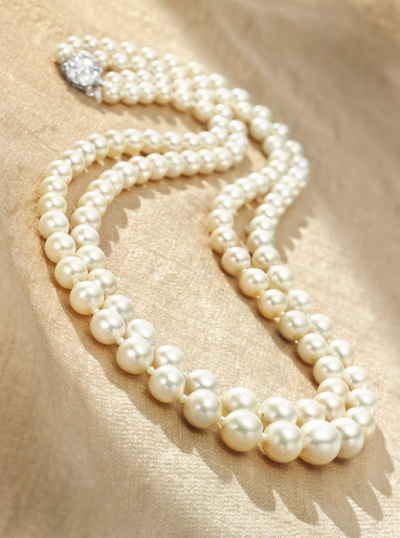 This double-strand pearl necklace may not have a name, but it easily holds its own in quality against the other fabulous pieces on this list. The necklace features 120 large pearls, ranging from 6.5-12.25mm in size. (For comparison, the largest pearl is even wider than a penny’s diameter.) The pearls are strung together and secured with a cushion cut three carat diamond clasp, a type IIa piece—the most chemically pure type of diamond—signed by Cartier. The necklace was auctioned at Christie’s in 2012 and fetched $3.7 million USD. 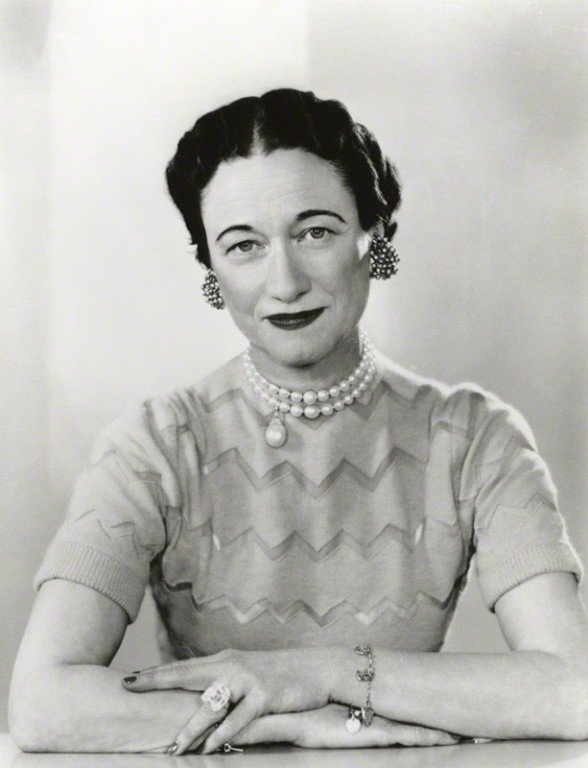 Wallis Simpson, Duchess of Windsor, was an avid and scrupulous fine jewelry collector. Throughout her life she amassed an exquisite collection of exceptional jewels, including this stunning single-strand pearl necklace.

The exquisite quality of these pearls is a strong indication of the necklace’s imperial legacy. The necklace, designed by Cartier, is made of 28 large pearls, each with a beautiful sheen and are nearly perfectly round in shape. The clasp also features four diamonds.

The necklace was, at one point, purchased by fashion designer Calvin Klein who gave it to his wife. In 2007, the necklace was sold at a Sotheby’s auction for over $4.8 million USD. 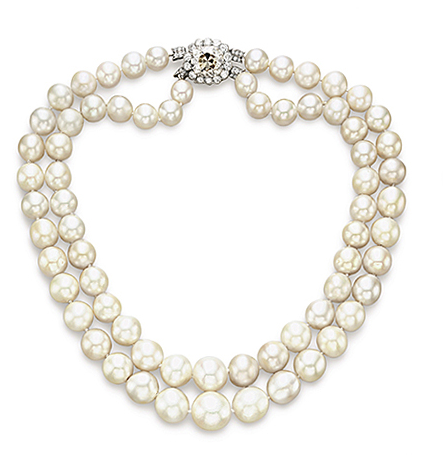 Maharani Sita Devi Sahib of Baroda in western India (1917-1989) was dubbed the “Indian Wallis Simpson” after she legally dissolved her first marriage and married her second husband, Maharaja Pratapsingh Gaekwar, who at the time was reportedly the second richest Indian prince and the 8th richest man in the world. To commemorate the couple’s wedding, the Maharaja gave Sita Devi several pieces of jewelry from the Baroda treasury, including a seven-strand pearl necklace.

The Baroda Necklace was re-fashioned into a two-strand necklace using the largest and most perfect pearls from the original seven-strand necklace. The necklace includes 68 graduated pearls, measuring 9.47mm to 16.04mm, and is joined by a cushion-cut diamond Cartier clasp. The necklace sold at Christie’s in New York for an incredible $7.1 million USD. 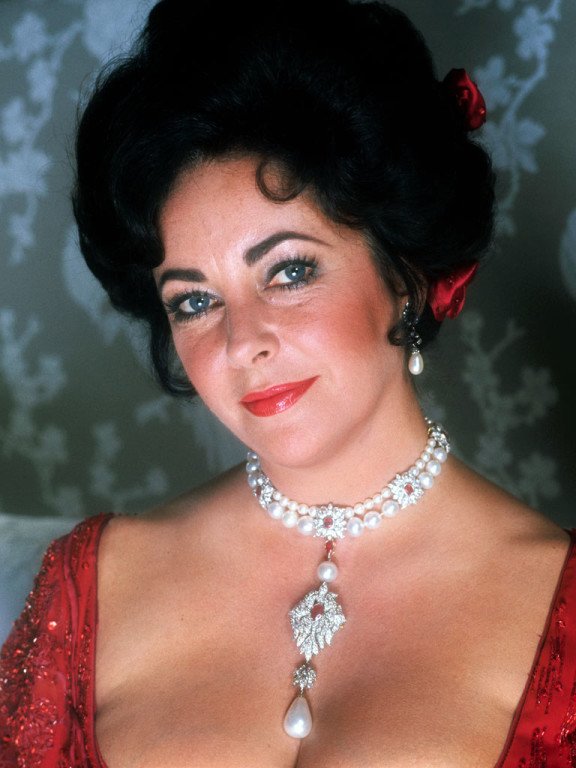 With its long, 500-year history, the La Peregrina Pearl is one of the most famous pearls in the world. In the mid-16th century, the pearl was found off the coast of Santa Margarita, a Spanish colony, in the Gulf of Panama. Phillip II of Spain then gifted the pearl to Mary I of England before their marriage. Upon the Queen’s death in 1558, it was returned to the Crown of Spain where it remained for the next 250 years and was worn by multiple Spanish royals on special occasions and for their official portraits.

In 1808, the older brother of Napoleon, Joseph Bonaparte became the King of Spain. He ruled for five years until the French forces were defeated at the Battle of Vitoria and he was forced out of the kingdom. As he fled, Bonaparte took some of the crown jewels, including La Peregrina Pearl. The pearl was then left to Napoleon III, who, after his exile to England in the 1870s, sold the pearl to James Hamilton, Duke of Abercorn.

In 1969, the Hamilton family sold the pearl at a Sotheby’s auction in London. Actor Richard Burton was the winning bidder, nabbing the pearl for a mere $37,000 USD. Burton gifted the pearl to his wife Elizabeth Taylor as a Valentine’s Day gift to feed her fine jewelry collection. Taylor later commissioned Cartier to re-set the Peregrina Pearl in a necklace outfitted with rubies, diamonds, and even more pearls.

In 2011, Elizabeth Taylor’s estate was posthumously auctioned by Christie’s and the Peregrina Pearl necklace sold for over $11 million USD.