Home Education The Historical Periods of Jewelry Styles and Trends

Starting with the 18th century, we go through history’s most important periods of jewelry styles, their most popular pieces and motifs and the social, political, and economic climate that influenced the era’s jewelry designs. 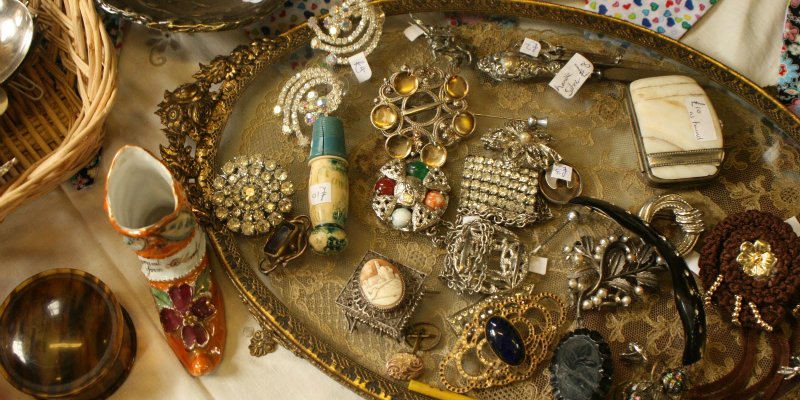 For any piece to be classified as “antique,” it must be over 100 years old. Although this is a bit of a wide timespan and a blanket statement, there are different prominent trends that can distinguish a piece within a particular century. For instance, in the 18th century, extremely detailed bodice ornaments and shoulder-length dangling earrings were widely popular. Precious stones were typically cushion-cut or rose-cut (a stone that is flat on one side and a faceted dome on the other) as they best caught and shined in the dim candle light.

In the 19th century, matching jewelry sets (known as parures) that included a complementary necklace, brooch, bracelet, set of earrings and sometimes a tiara became the au courant look of the upper class. To further showcase their wealth, members of the elite classes would don tiaras, large bracelets and extravagantly embellished necklaces. Colored gemstones also gained popularity during this century.

The early Victorian era or Romantic Period was influenced by a handful of different periods: Classical, Gothic, Renaissance and even Ancient Greek and Roman mythology were incorporated into designs. (To wit: serpents were a popular motif after Prince Albert gave Queen Victoria a snake engagement ring.) Master Italian goldsmiths were also hotly sought after for their elaborate gold wire work. 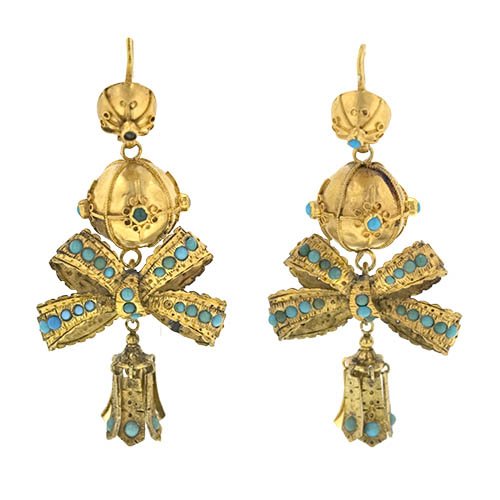 Hair combs and pins were an important part of any woman’s wardrobe. These hair ornaments were made of gold, gemstones and enamel. Because religion was a vital part of Victorian life, cross pendants were frequently worn. Alternatively, fashionable women wore lockets that included a daguerreotype of a loved one.

However, following Prince Albert’s death in 1861 and the Queen’s adoption of mourning garb, all-black mourning jewelry became popular. Jewelry from the Mid-Victorian or Grand Period was made of jet, onyx, and black glass. Human hair was also incorporated into designs; as macabre as it sounds, using hair in jewelry was meant to be a sentimental tribute. But darker and foreboding motifs like skulls and skeletons were frequently added to jewelry designs. During this time, cameos grew in popularity as a way to remember or honor a loved one. 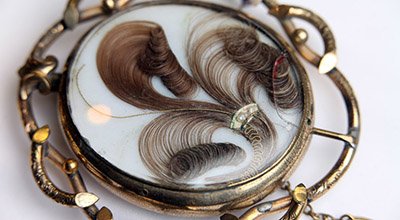 The late 19th Century gave way to the late Victorian Aesthetic Movement which emphasized a return to refined artistic taste and visually appealing designs. There was a focus on showcasing gemstones for their intrinsic beauty instead of flaunting them as a symbol of wealth. Diamonds were down-graded as a fashion faux-pas for daytime wear and reserved to be worn in the hair for evening events. 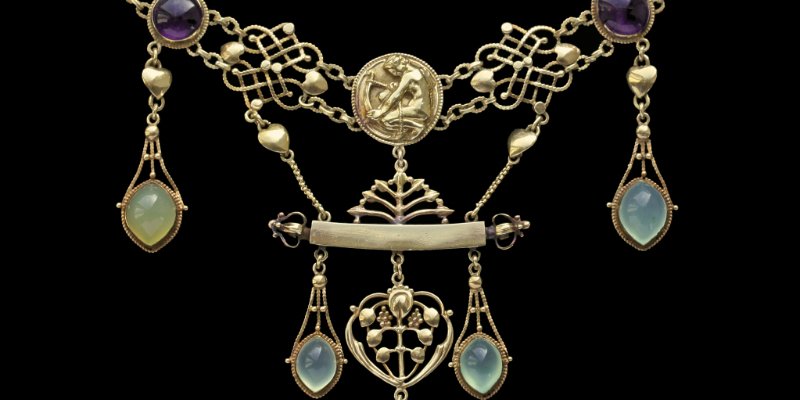 The Art Nouveau look was a short-lived trend, lasting from 1890-1910. But it proved to be an important cornerstone in the development of later jewelry styles.

Art Nouveau designs drew upon nature (such as flowers, birds and the female form) for is core inspiration but included a whimsical flourish, emphasized by soft curves and elegant lines. These romanticized depictions sharply contrasted from the rigid lines more typical of jewelry at the time.

During the Art Nouveau movement, diamonds took a back seat to other precious stones like agate, garnet, and aquamarine. New materials and techniques (like enameling, molded glass and ivory) were also used to develop the period’s fantastical designs. 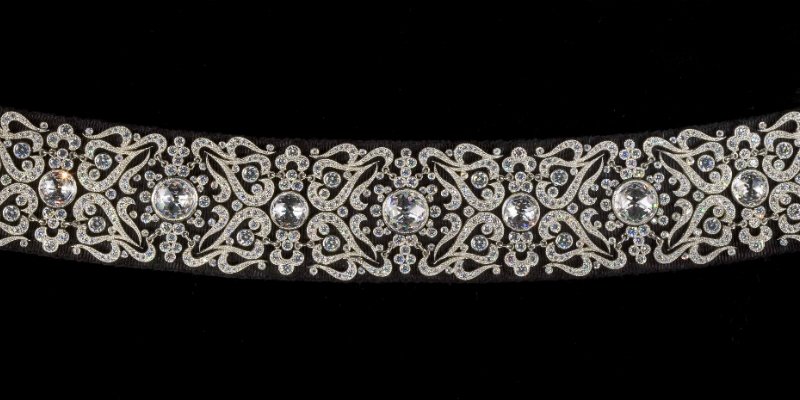 Alongside Art Nouveau, Belle Epoque designs also flourished. The Belle Epoque period relied heavily on the use of platinum and diamonds. This period is known as the Edwardian era of jewelry.

Diamonds were at the forefront but colored gems were also featured in smaller ways. The designs were elaborate but delicate, so a sturdy setting was needed and found in the newly developed platinum. Cartier was new but due to the fine craftsmanship of their designs in the Belle Époque period, the jeweler quickly gained an international reputation. 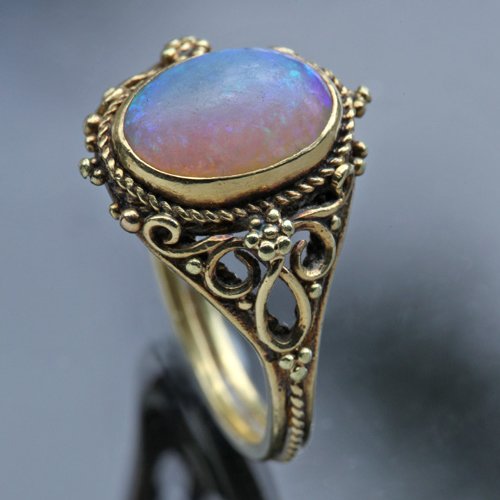 The short-lived period of Arts and Crafts jewelry (1890-1910) is marked by its rejection of machinery and return to hand-crafted wares. Because these jewels were made by entirely hand, they were largely simple designs that placed the intricate metalwork as the focal point. Enameling was a commonly used technique and semi-precious gemstones and non-precious metals were the go-to materials for Arts and Crafts jewelry. 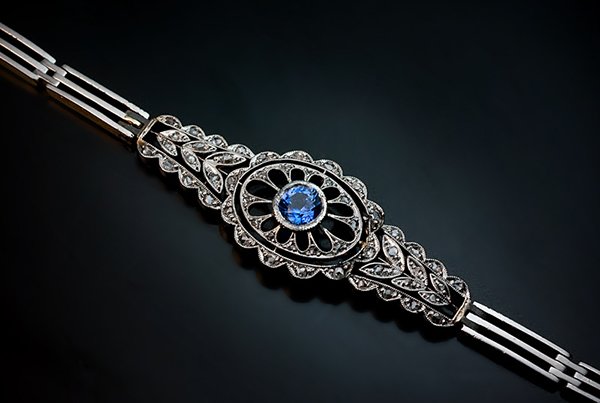 The Edwardian period (1901-1915) lifted is name from the reign of King Edward and Queen Alexandra of Great Britain. Edwardian jewelry was light and delicate, with a heavy emphasis on showcasing brilliant diamonds. (Although colorful gemstones like emeralds, rubies and sapphires were also used, diamonds were the real focal point.) The most prominent motifs were bows, festooning ribbons, flowers and even sporting events. To craft these delicate designs, Edwardian jewelers relied on platinum to securely set the precious stones. 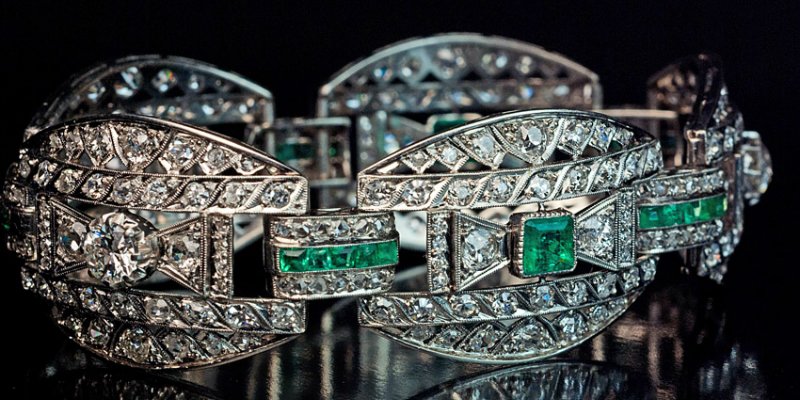 From 1915-1935, the Art Deco era was largely inspired by the concurrent art movements– Cubism’s geometric forms and Fauvism’s strong colors– and a return to ornate Louis XI furniture, combined with Asian and Middle East art and architectural influences. Art Deco blended together glamour, luxury and the time’s immense technological advances. 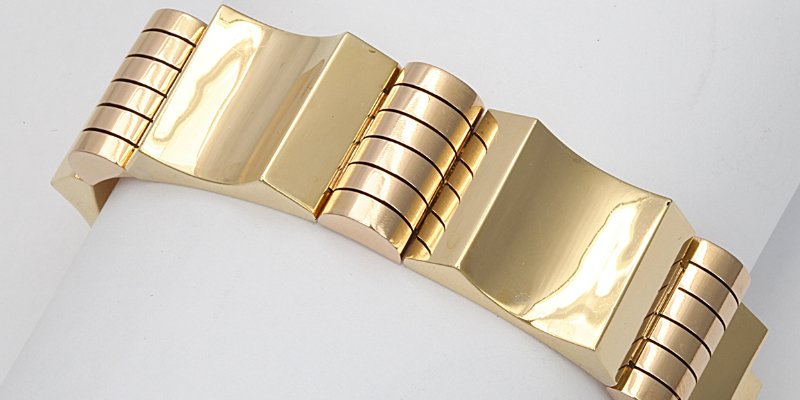 During the 1940s and 50s, Retro jewelry was designed to offset the serious, somber and austere clothing styles of the World War II era. Jewelry styles were big, colorful and remarkably playful. Brooches with flowers, bows and butterflies were especially popular among women who relied on these feminine motifs to soften the era’s masculine clothing styles. Some designers, notably Jean Schlumberger of Tiffany & Co., favored elaborate and naturalistic designs of florals, animals and birds to contrast the grave reality of the death and destruction of war.

Because of the wartime efforts, platinum was scarce and jewelers turned to budget-friendly stones like aquamarine and citrine in lieu of expensive diamonds, sapphires, emeralds and rubies. Retro designs typically include large semi-precious stones and only a few precious stones. To make the sparse stones feel more impressive, the settings were usually bold, geometric styles in contrasting rose, yellow or white gold. 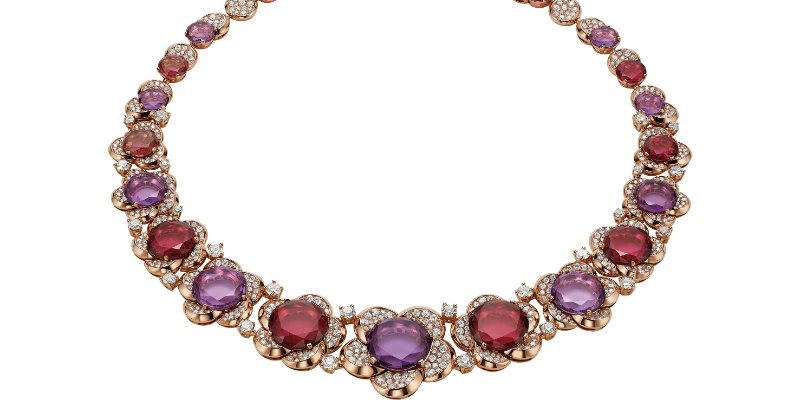 Following World War II, the jewelry of the 1950s and 1960s was markedly more feminine, precious and elegant. In a sharp break from the stark clothing styles of the 1940s, Mid-Century jewelry includes whimsical portrayals of nature like animals, flowers and vines. Other popular motifs included starbursts, people and highly textured pieces made of mesh, brushed or braided metal

And with the war over, there was a return to traditional fine jewelry materials like platinum and diamonds. Similarly, Mid-Century jewelry brought back the popularity of matching jewelry sets that brought a single motif through a necklace, brooch, bracelet and set of earrings. 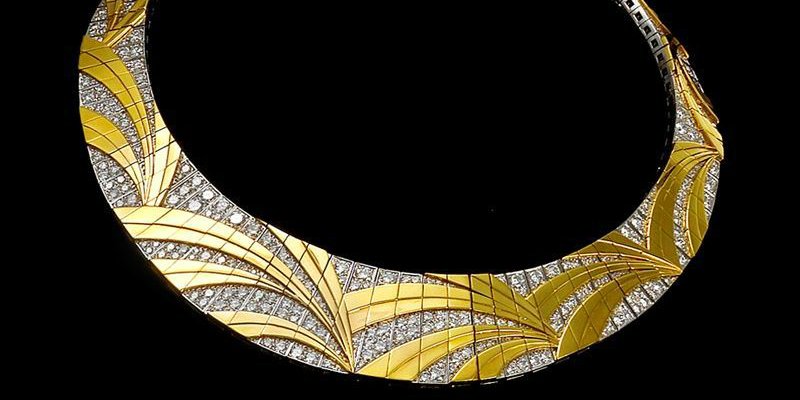 Beginning in the mid-1960s, the Modern period of jewelry was a general break from the past era’s “conventional” jewelry. Abstract, organic-shaped and richly textured yellow gold jewelry, dotted with colorful gemstones, were the norm. Modern jewelers also borrowed from other cultures to inform their designs and give their jewelry a Bohemian and multicultural flair.

As more women entered the workplace and the 1980s power suit with its boxy cut and dramatic shoulder pads became the look of professional women, Modern jewelry also grew in scale. In the era of “more is more,” large necklaces and huge earrings were commonplace.