Home Education What is a Grand Complication Watch?

Grand Complications the watch masterpieces in the world of haute horology, a testament to the unparalleled skill of a master watchmaker. We explain what makes a watch a Grand Complication and take a look at three of history’s most important and complicated watches.

What is a Grand Complication?
Before we can delve into the world of grand complications, we should quickly review what exactly is a watch complication. The most basic definition for a complication is: any mechanical watch function beyond simply telling the time. Watch complications include alarms, chronographs (or a stopwatch) and day or date displays.

While we may quickly dismiss these complications as commonplace on modern watches, they were significant breakthroughs in watchmaking when first introduced. These core complications are proof positive to the watchmaker’s skill, craftsmanship and ingenuity to layer in additional mechanical functions in such a small watch case.

Grand Complications, in turn, are considered the most complex and highest achievement of haute horology. While watchmakers, executives and collectors debate over what really qualifies a grand complication, the generally accepted definition of a Grand Complication is a portable timepiece that includes a minute repeater, moon phases, perpetual calendar, split-seconds chronograph and a grand and petite sonnerie which is a quiet gong that strikes every quarter of an hour.

The High-Stakes World of Grand Complications
Grand Complications are a badge of honor for watchmakers and brands, the finest of fine watchmaking. These premier timepieces can take more than 10 years to develop. They also test the skill of a horology master who needs to expertly layer together all these different components– and to make each function work flawlessly. Grand Complication watches can include upwards of 1,300 individual parts that need to neatly fit inside an incredibly limited space. 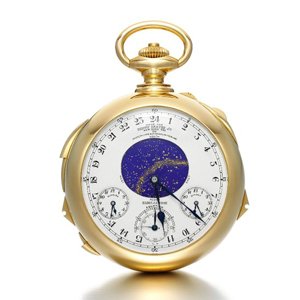 Although its title for the world’s most complicated was usurped by another Patek Philippe design in 1989, it remains the most complicated watch designed without the aid of computers. It was most recently sold at a Sotheby’s auction in 2014 for a record-breaking $24 million USD. 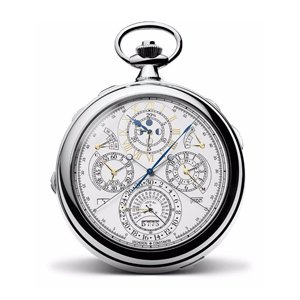 The current title for the Most Complicated Watch in the World goes to the Vacheron Constantin 57260. The watch debuted in 2015. It took Vacheron Constantin watchmakers eight years to develop. This hefty two-pound watch includes 57 complications made up of 2,826 individual components. (For comparison, the former title holder was the Patek Philippe Calibre 89 which boasted 33 complications in 1989.) It was built entirely by hand by three watchmakers.

This Vacheron Constantin Grand Complication was sold to a private collector for an undisclosed sum but experts estimate it had a $10 million USD price tag. 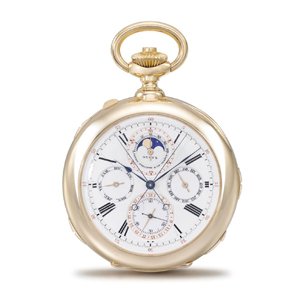 This pocket watch includes the core Grand Complication criteria: moon phases, a split-seconds chronograph, minute repeating perpetual calendar, and a grand and petit sonnerie. It is also made of a beautiful and unconventional 18K pink gold.

It was originally purchased in 1900 by Stephen S. Palmer, the president of the New Jersey Zinc Company and an avid watch collector. Palmer traveled to Patek Phillipe’s historic headquarters in Geneva to finalize the purchase of the Grand Complication. It is believed the Grand Complication rarely left the security of a bank vault as it was auctioned in near-perfect condition.