Gemstone is a blanket term we give to mineral crystals that are cut and polished to be used in jewelry making. But more specifically gemstones are categorized into two groups: precious and semi-precious stones.

Precious stones (namely diamonds, rubies, emeralds and sapphires) are translucent and rank high on the Mohs Hardness scale. Semi-precious stones meanwhile include the gemstones that are more abundant in nature but, despite their somewhat misleading name, can be as coveted and costly as precious stones.

We take a closer look at the primary precious and semi-precious gemstones, their distinctive features and what makes them so valuable. 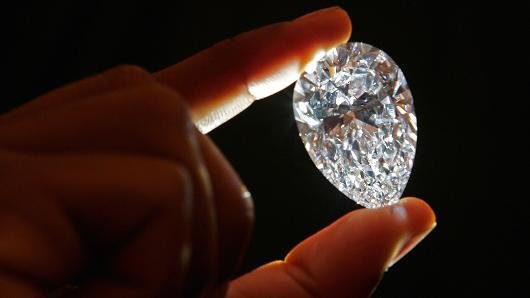 Diamonds are the colorless, crystalline form of pure, concentrated carbon. Diamonds form roughly 100 miles below the Earth’s surface where the intense pressure (at least 435,113 pounds per square inch) and sweltering temperatures of at least 752 degrees Fahrenheit create the ideal conditions to turn carbon into diamonds. This extreme process makes diamonds the hardest naturally-occurring material on earth, ranking as a 10 on the Mohs Hardness Scale.

The quality of a diamond is measured against “The 4Cs” which include color, cut, clarity, and carat weight.

Color refers to the shade in a range from colorless to a light yellow, with colorless diamonds being the rarest and therefore most valuable. There is a separate sub-group of rare and colorful diamonds dubbed fancy color diamonds whose vivid pink, red, blue, green, brown or yellow hues are the result of naturally occurring impurities in the diamond’s formation process.

Cut are the angles a craftsman cuts into a raw diamond to make it a polished diamond. These crucial cuts are rooted in scientific formulas and proportions designed to optimize the reflection and refraction of light within a stone. Of the “Four Cs,” cut is considered the most significant factor in determining a diamond’s value as it greatly influences on the diamond’s fire, brilliance and scintillation.

Clarity refers to a ranked scale of perfection or how few blemishes and inclusions there are within the diamond. This rating is determined by the number, size and location of the imperfections relative to the size of the diamond and their overall impact on the appearance of the stone. There are 11 potential grades from flawless to included. A flawless stone with no visible blemishes or inclusions under 10x magnification is extremely rare (and therefore incredibly valuable). Meanwhile an included diamond has flaws visible to the naked eye. 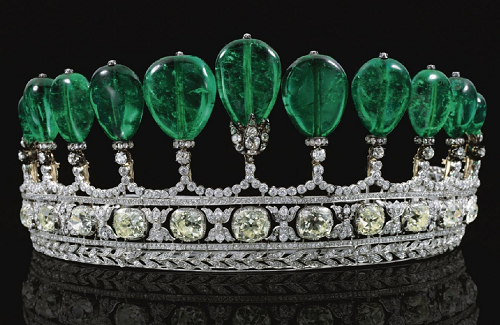 Emeralds are a rare variation of the mineral beryl and their rich green color is due to the chemical element chromium present in the stone.

Like diamonds, an emerald’s value is determined by color, cut, clarity, and carat weight. The optimum color for an emerald is a vivid green or a blueish-green.

Emerald is a comparatively softer stone (usually a 7.5-8 on the Mohs Scale) so nearly all emeralds have inclusions—and most are highly included. Ones without imperfections are exceedingly rare and more valuable than diamonds. Therefore, the emerald should ideally be very transparent, neither too dark nor too light.

The most common cut for an emerald stone is (no surprise here) the emerald cut. However other popular cuts include round, oval, pear, teardrop and cabochon, which is when a gemstone is shaped and polished into a rounded, bubble-like shape instead of faceted.

Synthetic emeralds are comparatively less expensive with fewer inclusions and occlusions. However they are less valuable than natural emeralds. When shopping for emerald jewelry, make sure you weigh the price and examine the clarity and vividness of the stone together. If the price seems unusually low for a bright and vivid emerald stone, the jewel may be synthetic. 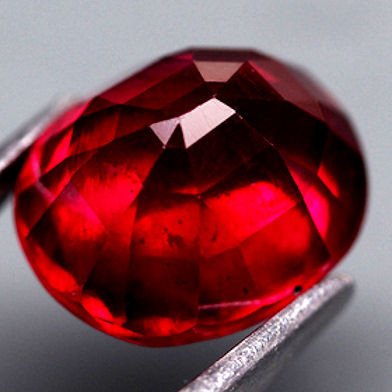 Rubies are specifically the red variation of the mineral corundum. The other color varieties of corundum are referred to as sapphires. Large rubies are incredibly rare, even more so than sapphires of equal size. When shopping for ruby jewelry, consider the price per carat which scales based upon the size of the ruby: the larger the ruby, the higher the per carat cost.

The primary determining factor of a ruby’s value is the intensity of its rich blood-red color with the most coveted being a vivid, medium dark red. The clarity of a ruby also influences its value: the higher the clarity, the higher the price. The most expensive and desired rubies hail from the Mogok Valley in Myanmar (Burma) which historically was the premier source for rubies. Although rubies have been mined around the world including in Thailand, Cambodia, and Afghanistan, Burmese rubies still garner the highest price tag. 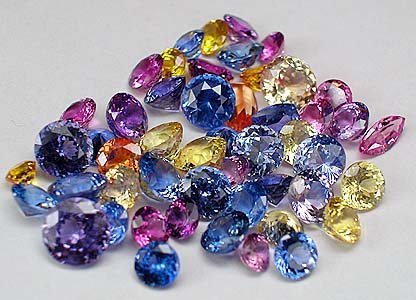 All non-red, gem-quality corundum gemstones are classified as sapphires. Sapphires are typically found in (and thought of as) blue but other fancy colors include yellow, purple, orange, green, even grey and black.

Like the aforementioned gemstones, the value of a sapphire is dependent upon the size, cut, color, and clarity. Color is based upon the vividness of the primary hue. The highest quality sapphires’ color consists of 85% of the primary hue and 15% of the secondary hue. In the case of pink sapphires, deeper pinks are higher in value but when the minimum color saturation level is reached, the pink sapphire is then re-classified as a ruby.

The origin of the sapphire also influences the gemstone’s value. Sapphires have been mined in a number of countries including Afghanistan, Colombia, Tanzania and Vietnam, but stones hailing from Kashmir, Burma, or Sri Lanka are considered the most valuable.

One special characteristic of sapphires is a six-pointed star-shaped inclusion known as an asterism. Although inclusions are often otherwise undesirable, this unique feature is highly coveted and are specially categorized as star sapphires. 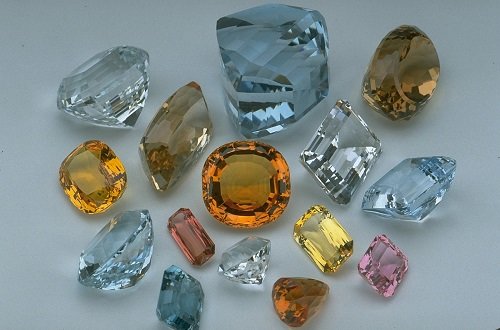 Topaz is a mineral of aluminum and fluorine. This semi-precious gemstone is naturally colorless but impurities can tint the transparent stone, creating an array of colors including yellow, pale gray, red-orange, blue-brown, blue, gold, and yellow-orange and, in rare instances, red or pink. Blue topaz is a popular jewelry-making material but naturally-occurring blue topaz is rare. In turn, topaz is frequently treated to create the desired blue hue.

Compared to other semi-precious gemstones, topaz is fairly abundant in the marketplace which makes it an affordable stone to include in jewelry design. Because of its crystal-shape, topaz is commonly cut into an oval, pear, or even emerald shape. 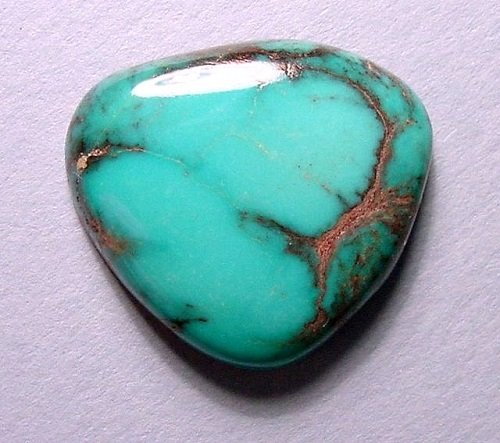 Turquoise is a hydrated phosphate of copper and aluminum and, when it is found in rare, finer-grades, it is classified as a gemstone. Unlike most gemstones, turquoise is opaque and usually ranges in color from white to sky blue but has also been found in powder- and greenish-blue. The vividness of the color is key when shopping for turquoise. If the stone is translucent, it is considered a lower quality stone. It is also worth noting that turquoise is oftentimes dyed to achieve that recognizable, bright blue color and this requires special care to maintain its rich color.

The name turquoise traces its origins to the 17th century and the French word turques in reference to the mineral’s introduction to Europe from Turkey. Since then, turquoise has remained in high demand which has gradually depleted the world’s supply. Therefore, while turquoise is moderately priced now, it could grow into an investment in the coming years. 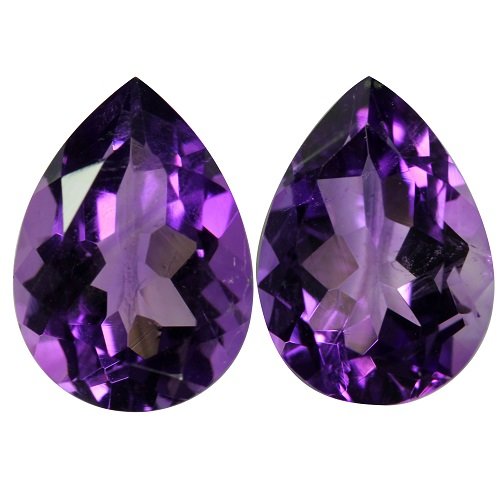 Amethyst is the violet grade of quartz which is caused by irradiation, iron impurities and the presence of trace elements. While quartz can appear in a variety of colors, amethyst is the most valued variety. Premier amethyst stones hail from Siberia, Sri Lanka, Brazil and eastern parts of Asia.

Amethyst’s color ranges from a light pink to a deep purple. The Deep Siberian is the ideal color grade for amethyst which consists of a 75-80% purple hue and 15-20% blue and red hues for an intensely purple color.

In jewelry-making, amethyst appears in most cuts and shapes. Unlike other gemstones, the price per carat of amethyst does not significantly increase relative to the carat weight, so sizable stones can appear in jewelry without costing drastically more than smaller amethyst stones.