Many timepieces, especially from the oldest and most prestigious brands, have quite the history of their own, with amazing stories behind the most innovative watch models. It comes as no surprise that these famous watches are used in famous films with spectacular roles in their own right. Keep reading to read about 3 of the most memorable watch models in famous films. 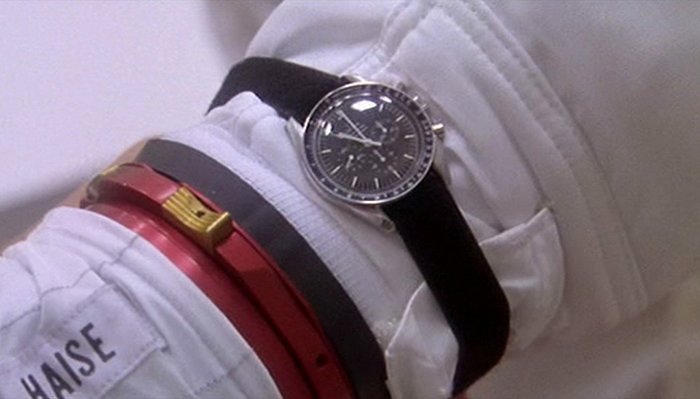 The Omega Speedmaster was the only wristwatch approved by NASA for use in space and its first journey was on the wrist of Walter Schirra in 1962. In 1965, the watch was officially approved for use during all manned missions into space. The Speedmaster made history as it accompanied by Neil Armstrong and Buzz Aldrin when the astronauts stepped foot on the moon for the first time. If these accomplishments weren’t impressive enough for a wristwatch, in 1970 the watch would secure its place in history.

During the Apollo 13 mission to the moon, an oxygen tank exploded causing damage to vital modules. Before attempting to re-enter Earth’s orbit, the crew was informed that they were off course. As the crew’s spacecraft was only meant to keep two people alive for two days instead of three people alive for four days, the crew needed to cut power everything non-vital, including the clocks. The pilots determined they would need to burn fuel for exactly 14 seconds in order to readjust the flight path and safely re-enter Earth’s orbit. As the clocks were not powered, the pilot had to rely on his Omega Speedmaster to time the maneuver.

The maneuver worked and the astronauts returned safely to Earth in an unprecedented fashion. Omega was later awarded NASA’s Silver Snoopy Award honoring NASA employees or contractors for achievements in flight safety and mission success. In the 1995 film, “Apollo 13,” depicting the events of the famous mission, it’s no surprise that the Omega Speedmaster was chosen for the fateful 14 seconds.

The watch didn’t take long to gain popularity as legendary actor Steve McQueen chose the watch for his film “Le Mans.” The film is about the 24-hour Le Mans car race, one of the most prestigious along with the Monaco Grand Prix for which the watch was named. McQueen consulted a friend, Formula One race car driver Jo Siffert, for advice to more accurately portray his role in “Le Mans.” Siffert then loaned McQueen his racing suit which had “Chronograph HEUER” embroidered as Heuer was a sponsor. McQueen complimented the racing suit with the blue dial Heuer Monaco.

It is believed there are multiple Monaco watches worn by McQueen on set during filming — between four and six are thought to exist. In 2009, one of the models believed to be worn by McQueen appeared at an online auction and sold for $87,600. Then, in 2012, another McQueen Monaco appeared at auction. Perhaps this was deemed more authentic because the piece sold for $600,000, in addition to the buyers premium, totaling $799,500 for the piece. The specific model, regardless if it was ever worn by McQueen is now a sought after vintage collector’s piece. 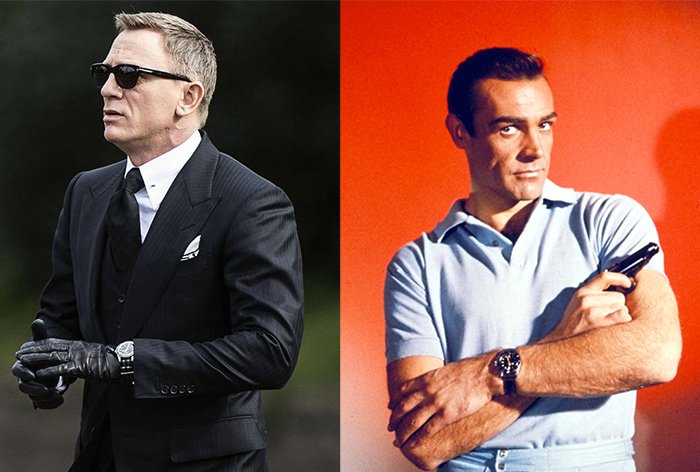 In the James Bond books, written by Ian Fleming, he describes Bond as wearing a Rolex Oyster Perpetual, but the movie franchise hasn’t entirely remained on course with the spy novels. Agent 007 may be known for his taste in drink and ability to save the world, but he’s also known as a style icon and the watch is always important. James Bond made his first appearance, along with his timepiece of choice in 1962, and was last seen in 2015.

The original James Bond, played by Sean Connery, wore a Rolex Submariner Ref. 6538. During the time of the film (1962), diving and diving watches were extremely popular, making the Submariner an obvious choice. Throughout Connery’s time as Bond, he always wore a Submariner and ref. 6538 became known as James Bond Submariner. Connery’s Bond also made a change to the Rolex — a nylon strap, which is know associated with Bond. After Connery, the new Bond actors would choose for more modern quartz watches, passing over the classic Rolex.

When a new era of Bond has emerged in the ’90s, with Bond played by Pierce Brosnan, a new Bond watch emerged as well. By the ’90s the Submariner had become a status symbol of luxury, which was against the utility nature of the watch before. The costume designer, considering the Omega Seamaster’s history with the British Royal Navy, chose a new model. Omega has been the Bond watch of choice ever since, with several models used through the years. Brosnan wore a blue dial Seamaster Professional on a steel bracelet, and the most recent Bond, Daniel Craig, wears a Seamaster Planet Ocean, Seamaster Professional, Seamaster Aqua Terra and special edition Seamaster 300 Master Co-Axial.