Home Brand Spotlight Is it Bulgari or BVLGARI?

Expectedly, in the world of fashion, presentation is everything. Brands are so particular about each and every design element that goes into their imagery, so naturally, they would pay just as much attention to the logo. When it comes to Bulgari, consumers often confuse the spelling of the brand name for its logo, BVLGARI. We’re here to set the record straight about that and share a little about how that confusion came to be.

First of all, the brand name is only written as BVLGARI when referring to the trademarked name and logo. When referring to product names or even just writing about the brand in an editorial sense, the simple “Bulgari” spelling is used. 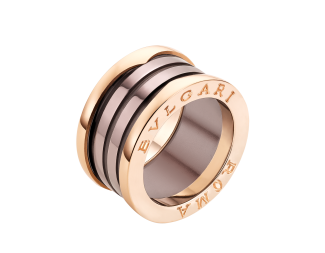 The Bulgari B.zero1 ring, seen here with the BVLGARI logo engraved into the gold.

As we note in this post about the history of the brand, Bulgari truly took root in Rome, Italy; that is where the business experienced its first successful boom, which is what inspired founder Sotirio Voulgaris, an artist and entrepreneur from a humble silversmithing family in a small village in Greece, to change his name and fully embrace the Italian city that he and his brainchild now called home. Thus, the brand’s name changed from Voulgaris to Bulgari, which is the phonetic spelling of the name in Italian.

Rome, its culture, and its architecture became the cornerstone of Bulgari’s designs: the structural, geometric motifs that appeared throughout Roman architecture heavily informed the Bulgari design team’s creations.

This dedication to the brand’s home city of Rome, and luxury brands’ penchant for paying thorough homages to the muses that inspire their classic motifs, led to the Voulgaris’ decision to update the logo to BVLGARI, using a V instead of a U, as they did when the Roman alphabet was still widely used.

Today, the brand not only produces jewelry, but also fragrances, scarves and neckties, sunglasses, and leather goods. In addition, they have launched the Bulgari Hotels and Resorts, a group of luxury hotels spanning the most fashion-forward cities in Europe and Asia.