Home Brand Spotlight The History of the Patek Philippe Brand

Patek Philippe is recognized as the world’s leading watch maker. This prestigious brand is credited with building some of the most complicated and valuable timepieces. We look back at the 178-year history of this legendary and ground-breaking watch brand to learn more about how it earned its illustrious reputation.

The Early Life of Antoni Patek
Antoni Norbert Patek was born in 1812 in a small village in Poland, amidst great international and political changes. In the wake of Napoleon’s great defeat by Russia in 1813, the Congress of Vienna redrew Poland’s borders and Poland was placed under the control of Russia’s controversial Tsar Nicholas I. When he turned 16, Patek enlisted in the First Mounted Rifles of the Polish cavalry and served as a freedom fighter against Russia. Patek ultimately fled Poland and the Tsar’s brutal policies in the mid-1830s.

Patek sought political asylum in Paris and then moved to the epicenter of watchmaking: Geneva, Switzerland. Patek immersed himself in the watchmaking industry, first buying high-quality movements to mount in his own watch cases and then opening his own company with his business partner, Francois Czapek. From their Geneva headquarters, Patek, Czapek & Co. produced an estimated 1,120 timepieces. 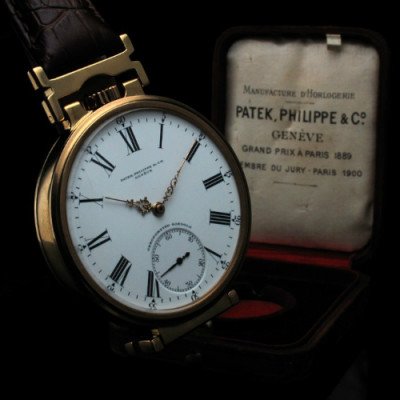 Meeting Jean Adrien Philippe
In 1844, Patek traveled to Paris for an exhibition and was introduced to Jean Adrien Philippe. Philippe was a talented and widely respected watchmaker, best-known for designing an impressively thin pocket watch. Philippe was also credited for revolutionizing watch design when he introduced his timepiece that could be wound with a crown, negating the need for the bothersome keys previously used to wind a watch.

In 1845, with Patek’s contract with Czapek set to expire, Philippe joined Patek’s new watch company, Patek & Co., as a partner and technical director. The company would later be renamed Patek Philippe & Co. in 1851.

The Rise of Patek Philippe & Co.
The newly-founded watch brand quickly rose to prominence. Philippe penned a successful book on his keyless pocket watch, cementing his industry renown as a watch expert. Meanwhile, Patek traveled extensively and internationally to market their watches. And Patek Philippe watches continued to innovate and quickly racked up awards and accolades.

In 1861, Patek Philippe debuted its stem-winding watch, shortly followed by its durable mainspring that proved a significant step in the development of the self-winding watch. In 1855, Patek Philippe’s pocket watch was awarded a gold medal at the first Universal Exposition. Patek Philippe also developed a watch to simultaneously display several time zones in 1870; this design would ultimately be reworked to become the universal time watch. A major business coup for the brand was becoming the principal supplier of pocket watches for New York’s Tiffany & Co. in 1876. 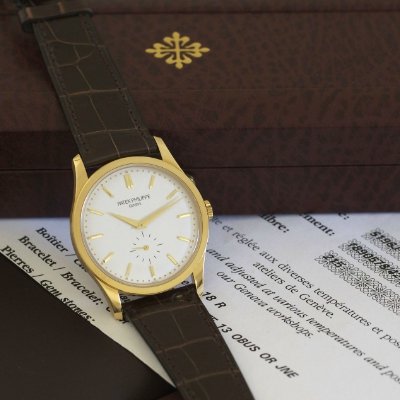 The Great Depression’s Effect
Joseph Antonine and Jospeh Emile continued to manage Patek Philippe as a family business, even as they transformed it into a stock corporation, named Ancienne Manufacture d’Horlogerie Patek Philippe & Cie. S.A., and installed seven shareholders onto its first board.

In 1932, the world’s economy was crippled by the United States’ Great Depression. The struggling Patek Phillipe & Co. turned to the owners of their dial maker business partner, Fabrique de Cadrans Sterns Frères, Charles and Jean Stern. Prompted by both their business savvy and a sentimental desire to perpetuate the Swiss watchmaking traditions, the Stern brothers purchased a majority interest in the waning Patek Philippe & Co. business. And, shortly after poaching Jean Pfister, a renowned watch maker, from Tavannes Watch Co., in 1933, Patek Philippe’s new management announced Patek Philippe would now begin making its own movements instead of buying them from LeCoultre.

With the Stern brothers at the helm, Patek Philippe’s business quickly picked back up. Patek Philippe introduced its flagship model, the Calatrava, in 1932; the minimalist design was inspired by the Bauhaus movement that brought form and function together. Patek Philippe also received a historic commission from American industrialist Henry Graves, Jr. in 1933. The now-famous masterpiece was the most complicated Patek Philippe pocket watch and, at the time, was valued at a stunning $60,000 USD (or over $1.1 million USD today).

The Quartz Crisis
In 1977, Philippe Stern, Charles Stern’s grandson, assumed control of the company. However, this was during the infamous Quartz Crisis that crippled the watch industry. The introduction of inexpensive quartz watches (and their subsequent takeover of mechanical watches’ market share) devastated the traditional watch industry that saw its sales plummet. Philippe Stern delicately straddled the world of traditional watch making with the new, incoming technology by incorporating quartz into select models. This savvy move kept Patek Philippe afloat. By 1984, when vintage watch collecting became a popular new hobby, interest in Patek Philippe was revitalized. And Patek Philippe’s hype was at fever pitch in 1989 when the brand celebrated its 150th anniversary.

Patek Philippe Today
Patek Philippe still reigns supreme in the world of watchmaking– with some fans going so far as to rank Patek Philippe as the best watchmaker in history. The company generates over $1.3 billion in annual revenue. Meanwhile the Stern family, including Philippe and his son Thierry, have a net worth of around $3 billion USD.

It is estimated Patek Philippe has produced only 1 million watches in its 178-year history. They are hotly sought after and prized by collectors. The rarest of the rare Patek Philippe watches regularly pull down record-breaking amounts at auction including the Henry Graves Jr. Supercomplication pocket watch that sold for $24 million USD in 2014.