Home Education 5 Reasons You Should Never Buy a Counterfeit Watch

Sure, buying a known-counterfeit designer watch seems like a pretty victimless crime—especially when you think about the big name brands who rake in beaucoup bucks for their watches. Plus, only you know you’re sporting a fake Rolex. Who are you really hurting, right?

Although it may seem like a harmless crime, trafficking in counterfeit watches is still illegal and will ultimately come back to haunt you. We shine some light on the shady underworld of counterfeit watches and breakdown the reasons why you should stay far away from phony designer goods.

Reason #1: Your watch can be confiscated and you can be fined for owning a fake watch.
In Italy and France, you will be immediately fined and can face serious jail time if you are caught simply buying counterfeit goods.

Stateside, it is not illegal to buy (even knowingly) a counterfeit watch. But it is very illegal to be caught selling counterfeit goods in the United States. If you are caught with just two fake watches, you can be accused of trying to sell them which is a big problem for you. Even first-time offenders can face upwards of 10 years in prison and a $2 million fee.

Reason #2: You will hurt your own reputation.
If you hope to break into the watch-collecting community, wearing a fake Breitling is a surefire way to end your entrance right then and there. First off, you will embarrass yourself if you try and pass off even a high-quality “replica” watch as the real-deal. Watch collectors will quickly be able to sniff out your fake.

Secondly, watch collectors are known for trading and selling watches within their tight-knit community. If you are known for owning a fake watch, other collectors may be skeptical of your collection and shy away from dealing with you.

And, even if you don’t aspire to amass a collection of watches, having a phony watch on your wrist raises eyebrows as onlookers question if anything else you’re sporting is inauthentic. Yes, it’s definitely just people snidely passing judgement—which isn’t fair, of course—but it’s the harsh reality of how you may be negatively perceived just for wearing a fake watch. 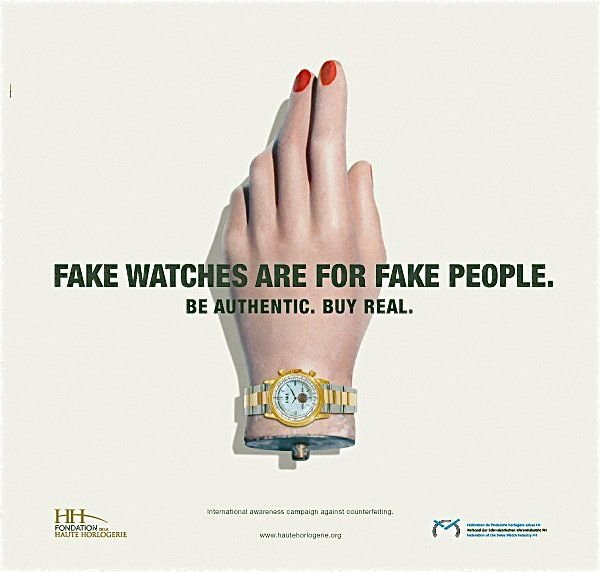 Reason #3: You dilute the brand’s prestige that you’re aspiring to.
Let’s say, down the line, you save up some cash and can afford a real-deal luxury watch. You’re effectively buying into the prestige, tradition and heritage of the timepiece; that brand name means something to you and a lot of other people. The problem with counterfeit watches is that they water down the cachet of luxury brands.

So, it may not seem like a big deal if a single person has a fake Rolex. But, if more and more phony watches work their way into the mainstream, people start to assume anyone and everyone wearing a Rolex watch is really wearing a fake. When fake watches saturate the market, it effectively wipes out designer’s renown—and leaves you out a few grand on a beloved watch that everyone dismisses as a fake.

Reason #4: It’s a waste of money.
While some counterfeiters are hawking their phony watches for a couple bucks, other counterfeiters build surprisingly convincing “replica” designer watches at a few hundred dollars a pop. Granted, spending $600 is not the same as spending $6,000 on a watch but it’s still a significant chunk of change! Moreover, it’s a big amount to spend on something fake. Factor in the likelihood that a counterfeit watch will break down within a year and you can quickly see how “investing” in a “good fake” is a real waste of your hard earned cash.

Reason #5: Your credit card info or even identity could be stolen.
In the past, counterfeit watches were typically purchased in person with cash. However, more and more counterfeiters have been moving online in recent years. In order to elude law officials, counterfeiters will frequently change their URLs and quickly open and shutter their websites. In turn, their faulty websites are incredibly vulnerable to hackers and identity thieves. Shopping on these shady sites leaves you susceptible to having your personal and credit card info stolen.