Alfred Van Cleef and his father-in-law Salomon Arpels founded Van Cleef & Arpels in 1896. Throughout its 120 year history, the jewelry and watchmaking house has distinguished itself within the industry by giving paramount importance to quality, detail, and craftsmanship.

Van Cleef & Arpels is one of the most prominent and desirable brands amongst the world’s elite. Their clientele includes royalty and some of history’s most famous celebrities. Here are some of Van Cleef & Arpels’ most iconic clients.

“One day I’m going to find you the most perfect ruby in the world,” was the romantic promise actor Richard Burton made Elizabeth Taylor. After a four years search, he found Van Cleef & Arpels’ Puertas Ruby ring that boasted a 8.25-carat ruby center stone, surrounded by diamonds and set in yellow gold. The actress, recalling the moment when she opened the ring box said, “I screamed, which probably echoed over the mountains, and I couldn’t stop screaming, I knew I was staring at the most exquisite ruby anyone had ever seen.” 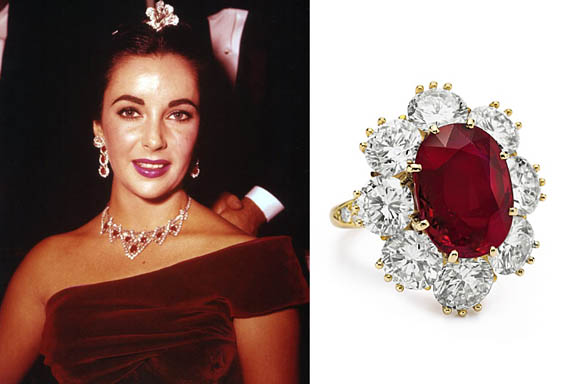 Grace Kelly
Grace Kelly was one of the most popular film actresses in the 1950s, giving up her illustrious career to become Princess of Monaco in 1956, after a three-week engagement to Prince Rainier.

As an early wedding gift, Prince Rainier presented Grace with a set of Van Cleef & Arpels pearl and diamond jewelry. The suite includes a three-strand pearl necklace, bracelet, pair of earrings, and a ring. Soon after, Van Cleef & Arpels became the “Official Supplier to the Principality of Monaco” and was charged with creating the stunning jewels Princess Kelly wore for official and private occasions, including a tiara made of round, marquise, and pear-shaped diamonds (weighing a total of 77.34 carats) that Princess Kelly donned at her daughter’s wedding in 1978. 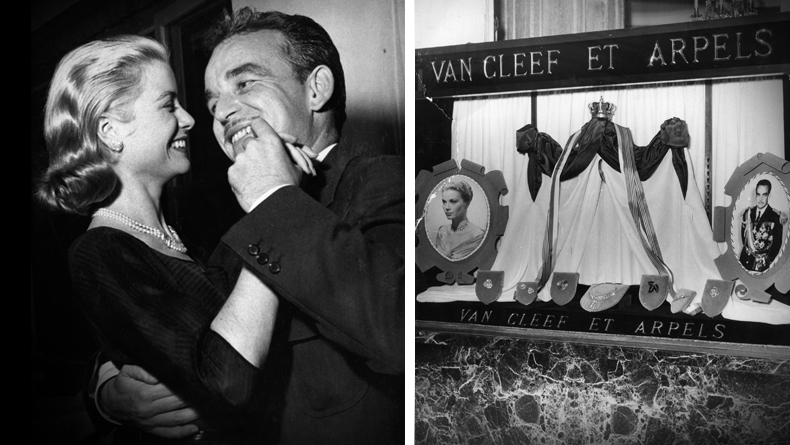 Marlene Dietrich
Actress Marlene Dietrich’s family owned a jewelry shop on Berlin’s most fashionable thoroughfare, Unter den Linden. Jewelry ran in her blood, and she was an avid collector.

Many of her jewels were made by special order from renowned jewelers including Paul Flato, Fulco di Verdura, Mauboussin and Van Cleef & Arpels. The most noteworthy, and most dramatic, of her jewels that appeared in one of her films also happened to be her favorite: a three-dimensional ruby and diamond Jarretière cuff bracelet made by Van Cleef & Arpels circa 1937.

According to Dietrich’s grandson, this striking cuff was made with “all her bits of jewelry” after the actress brought an odd assortment of more than 20 personal pieces of jewelry, including a ruby bracelet and necklace, a pair of diamond earrings, and a diamond necklace, and a handful of brooches into Van Cleef & Arpels. Dietrich’s jewelry was re-set into the stunning Jarretière cuff that exudes Old Hollywood glamour. 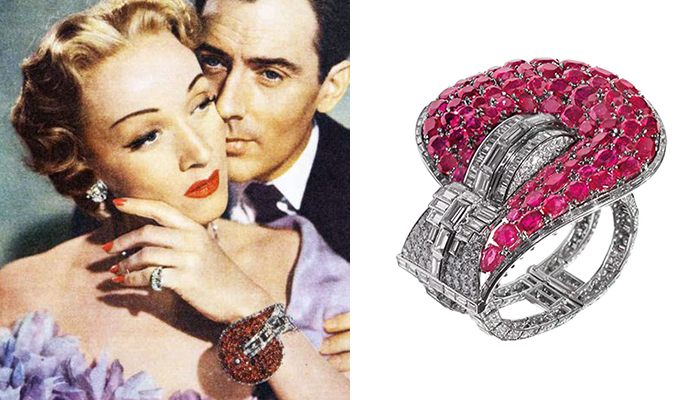 Duchess of Windsor
Out of love for Wallis Simpson, King Edward VIII gave up his throne on December 10, 1936, after having reigned for only 11 months. Their marriage was condemned by the royal family because of Wallis’ divorcée status.

During their 35 years together, Edward VIII gave Wallis Simpson many necklaces, bracelets, brooches and earrings which he often purchased from Van Cleef & Arpels or Cartier.  Many of the items were custom designed and given as gifts to commemorate special occasions, often inscribed with personal messages from the Duke.

It is thought that the Duchess of Windsor inspired Van Cleef & Arpels to create a piece of high jewelry inspired by the humble zipper. An outstanding technical achievement, the Zip Necklace is dressed with yellow gold, diamonds, ribbons of rubies or emeralds, colored pearls, lapis lazuli, and sapphires which actually zips and unzips. It soon achieved iconic status and took artisans more than 10 years to perfect a fully functioning zipper. Even the simplest zip styles require at least 400 hours of labor, more elaborate versions requiring up to 1,200. An extremely limited number of these necklaces have ever been produced. 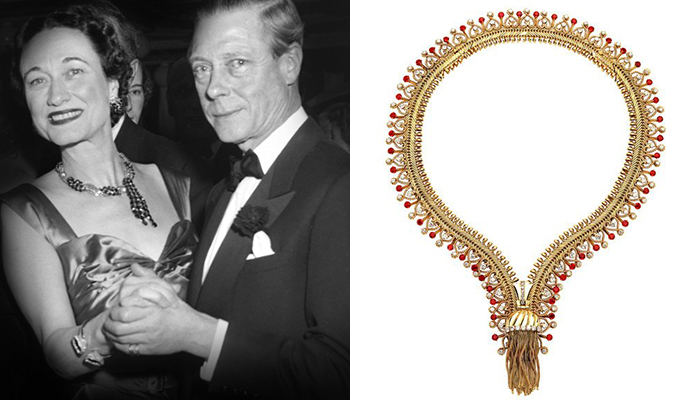