If you love watches, you no doubt know of Panerai, the now-Swiss-made watch brand with Italian roots dating back more than a century and a half. While the company has a long history, its monumental rise to stardom as a coveted collector’s brand with a cult-like following (a group dubbed the Paneristi) around the world, dates back only 20 years. Here we take a look at the origins of Panerai, its military and marine past, and its modern-day iconic status.

The Origins of Panerai and its Early Military History
In 1860 Italian watchmaker Giovanni Panerai opened a small watchmaker’s shop in Florence on Ponte alle Grazie to offer watch services and act as a watchmaking school. For many years, Panerai operated his small shop and school, but in the 1900s the company started making timepieces for the Royal Italian Navy. Additionally, the shop, G. Panerai & Figlio, moved to a more central location in Piazza San Giovanni, opposite the Duomo, where it remains today. 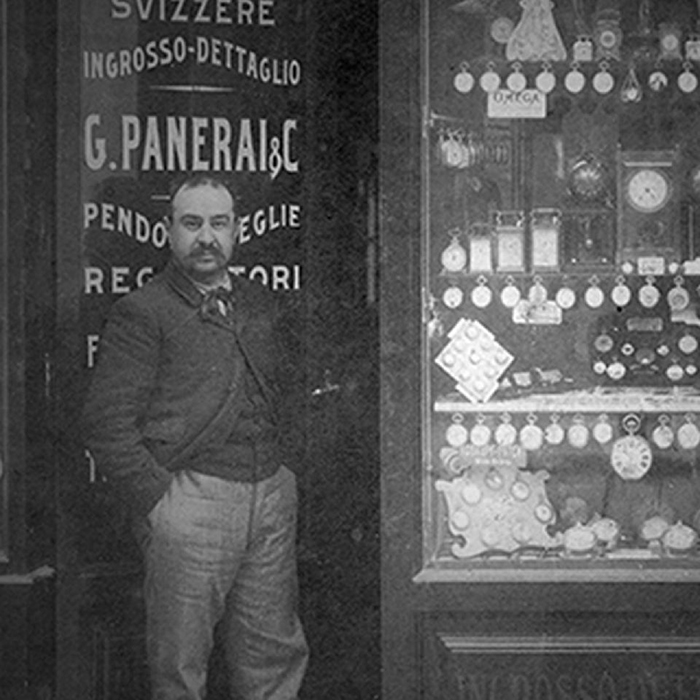 Giovanni Panerai outside his watch store

As the navy demands increased, Panerai stepped up its precision-instrument game and, in 1916, unveiled the Panerai Radiomir, which far surpassed anything else on the market in terms of luminosity. The Radiomir used a radium-based powder, for which Panerai submitted a patent, to illuminate the dials. The intense visibility of the radium-based paint underwater brought even greater military attention to Panerai.

Panerai Introduces the Radiomir
Two decades later, in 1936, with World War II looming, the Royal Italian Navy again came to Panerai to create a marine watch that was luminous, large, easy to read, and water-resistant. The Navy needed watches designed expressly for the frogman of the First Submarine Group Command of the Royal Italian Navy who would ride the under-water slow-running torpedoes.

To bring those first military-marine watches to fruition, Panerai turned to Rolex, which already had the Oyster, a water-resistant case the brand created in 1926. Rolex enlarged its 26mm Oyster case for Panerai and fitted the watches with a pocket watch movement, the Rolex 618 caliber. Panerai added its famed luminosity and the first Radiomir prototypes were born. 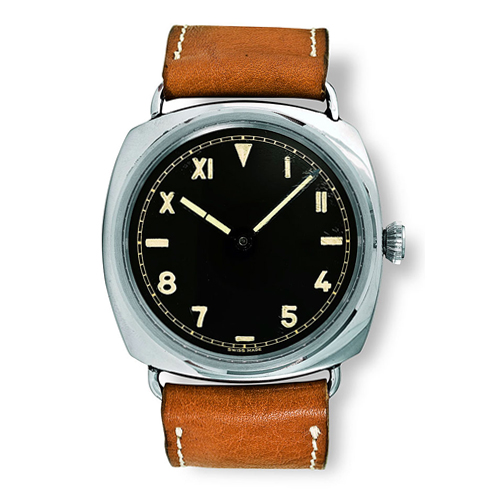 Those first Radiomir watches (which clearly resemble the Rolex Oyster watches of the time) were large in size for the time, but were designed for military use with luminescent numerals and indexes—all hallmarks of the Radiomir today. Panerai created 10 versions for the Italian navy, and began making improvements and advancements. In 1938, the brand unveiled a new Radiomir with, what is today, the brand’s famous sandwich dial, with overlapping plates to make the luminescent radium more readable. It featured the four main numerals (12, 3, 6, 9) and stick indexes.

In 1940, in response to the Italian Royal Navy’s request for water resistance for longer periods of time, Panerai reworked the Radiomir and unveiled the Radiomir 1940 with a case that was milled from a single block of steel and a reshaped crown that went from conical to tubular. With advances in luminescent materials, Panerai unveiled the Luminor in 1949 with a new patented luminous substance that was tritium-based. Within a year, the transition from the Radiomir substance to the Luminor was complete.

Panerai’s Rise to Mainstream Popularity After World War II
In 1953, with the war over, Panerai’s contract with the Italian Navy ended and the brand made its watches available to the public in Italy for the first time. Because of their size, Panerai watches were not in great demand. In 1972, Guido Panerai passed away and the family business passed to another family member, engineer Dino Zei, who changed the name officially to Officine Panerai S.r.L. In the ensuing decades, Panerai had a small, but somewhat obscure, business in Italy. In 1993, the brand released three updated collections, including the Luminor and Mare Nostrum.

The watches caught the attention of actor Sylvester Stallone, who was filming a movie in Italy called Daylight. He walked by the Panerai boutique in Florence and fell in love with the bold look of the watches. He bought one and wore it in the movie. Additionally, he asked Panerai to make more for him, with his name on the dial. The brand created the limited-edition Sly-tech, ten of which had a black dial and five with a white dial, which Stallone brought back to America for friends. 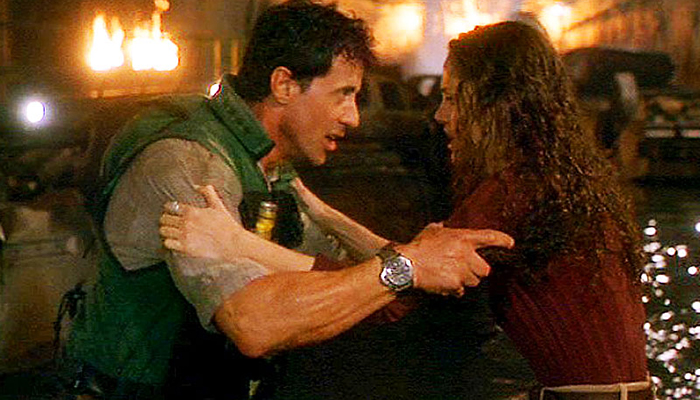 Panerai Relaunches with Richemont Group
Around the same time, the Panerai collection caught the attention of Johann Rupert, head of the Vendome Group (today Richemont Group). He liked the military influences and the brand’s rich past and connection with Rolex. In 1997, the Vendome Group acquired Officine Panerai for about $1 million. Rupert turned to then-Cartier executive Angelo Bonati to oversee the new, fairly fledgling firm and planned an international launch of Panerai for 2001.

It was Bonati’s dream to bring the brand to great heights and to create a full, vertically-integrated manufacture. Working with a tiny marketing budget, Bonati had to get very creative. He focused on product first, unveiling a collection in 1998 that had an inscription on the back and the watch number, starting with the letter A. Every year thereafter, the watch numbers started with the next letter of the alphabet. (This year, its nineteenth in production, Panerai is on the letter “U.”)

With the official international launch of Panerai by the Richemont Group, the brand selected the phrase “Laboratorio di Idee” (Italian for laboratory of ideas) to indicate its ongoing commitment to research and innovation. It is a philosophy that endures today, especially with respect to the brand’s revolutionary timepieces such as the L’Astronomo and Lo Sienziato. 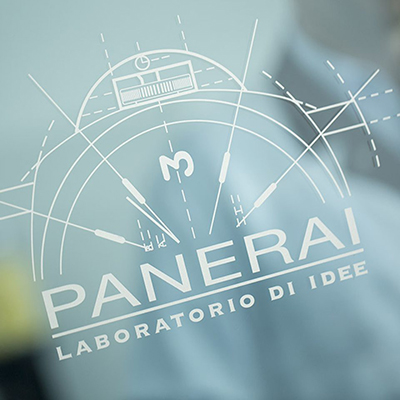 The first watches unveiled under the leadership of Bonati and the ownership of Vendome/Richemont Group were the Luminor and Luminor Marina and were incredibly bold thanks to their crown guard and luminosity. Also, because Stallone still wore the watches in movies and had gifted one to Arnold Schwarzenegger who also wore his regularly, consumers around the world were seeing Panerai watches.

Soon, a group of watch lovers took note. Bonati cultivated those collectors and the cult-like following of watch lovers formed what is known as the Paneristi. This was a huge move in the watch world, especially in the year 2000. Never before did a watch brand have such a loyal following who would meet and talk about their watches. Bonati also focused on creating a full manufacture and hired some of the finest watchmakers. In 2002, the brand opened a 10,000-square-meter (approximately 107,640 square-feet) watchmaking facility in Lake Neuchatel and unveiled its first in-house Panerai movement, the P. 2002, a hand-wound caliber with GMT function. 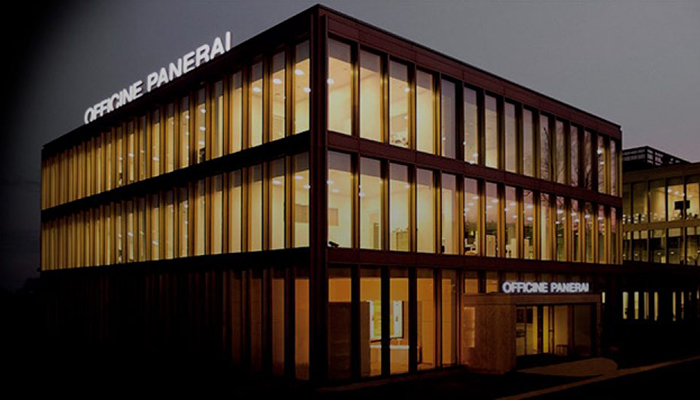 Panerai’s Issues Modern & Coveted Limited-Edition Watches
Bonati insisted on creating limited editions to keep the production controlled and demand high. In 2006, Panerai issued the 1936 California Dial Radiomir special edition, a reissue of the first Panerai model presented to the Italian Marina Militare. Only 1,936 pieces were made. Today that watch and the California Dial are in great demand by Paneristi. Other important re-issues included the Mare Nostrum, a 99-piece edition of a watch that Panerai had designed for deck officers of the Navy in 1942.

Additionally, the brand reinforced its marine history, forming partnerships with the sailing world and becoming immensely involved with the world’s Classic Yacht regattas. Panerai has also expanded its retail footprint and boasts 75 stores globally, including 13 in America.

Earlier this year Bonati stepped down as CEO after 20 years of bringing Panerai from relative obscurity to international fame. The newly appointed CEO, Jean-Marc Pontroue, hails from the Roger Dubuis brand and has a penchant for the Panerai Submersibles. It will be interesting to see what happens next. In the meantime, Panerai lovers should scuttle to get your hands on some of the fine watches that were produced in the era from 1997 to date. 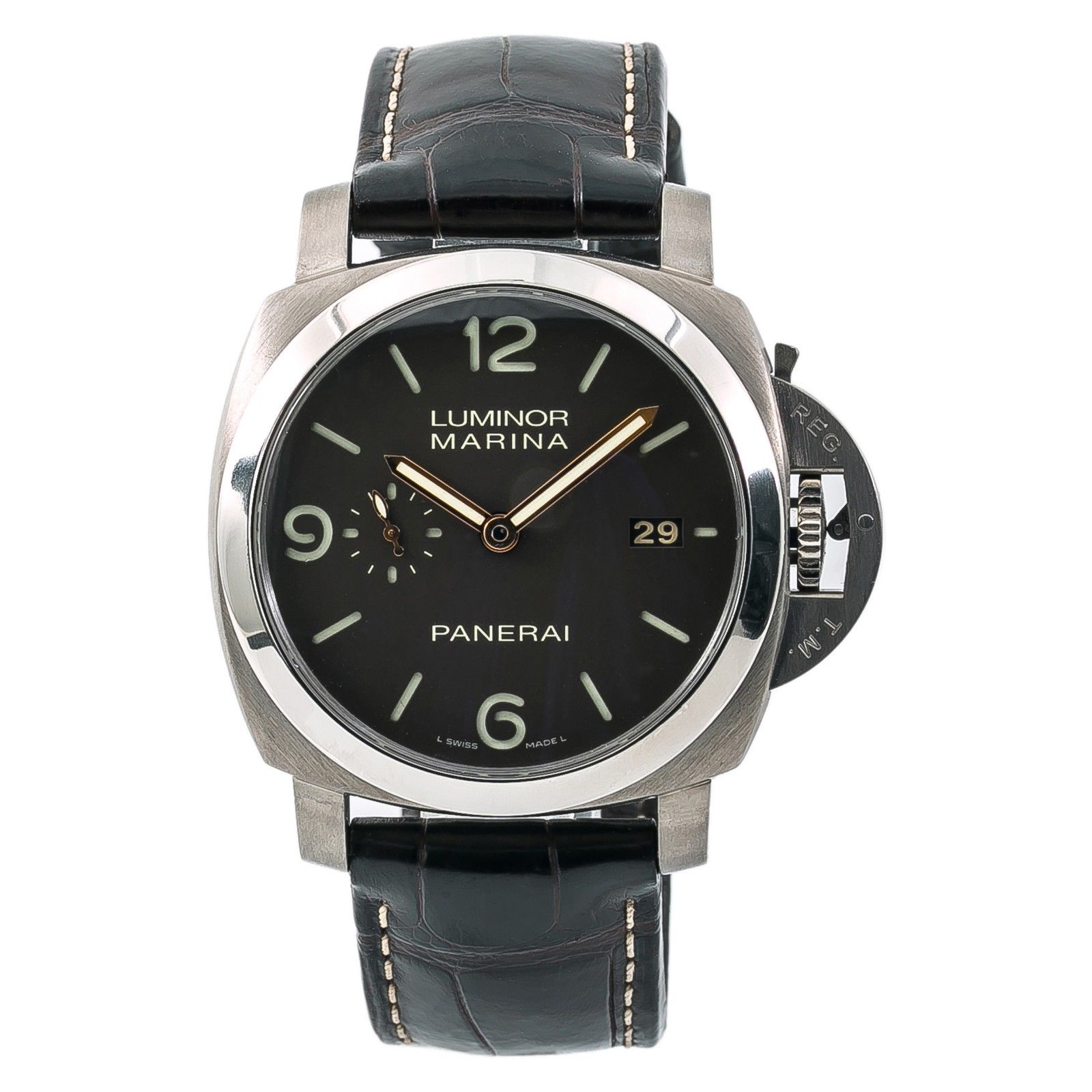 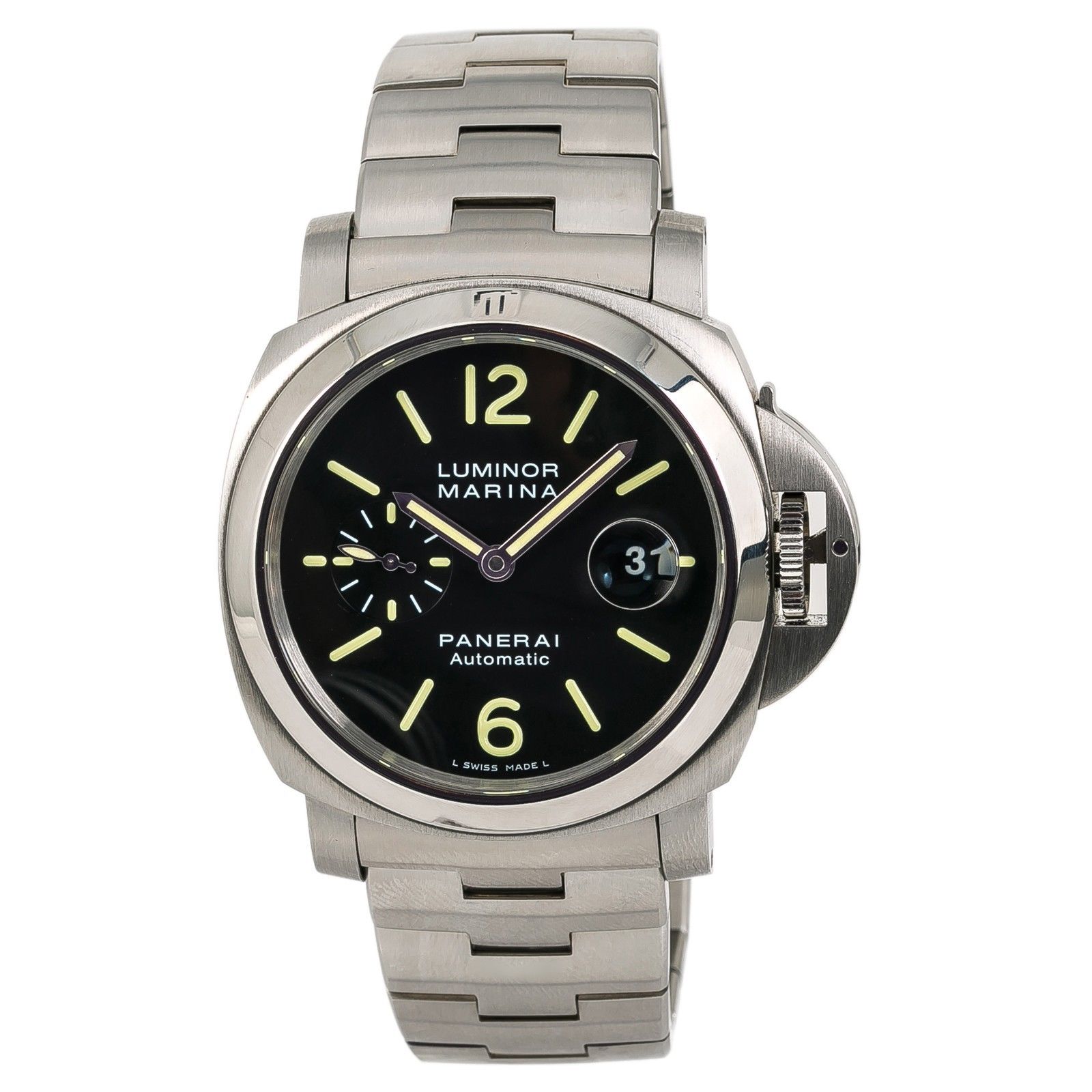 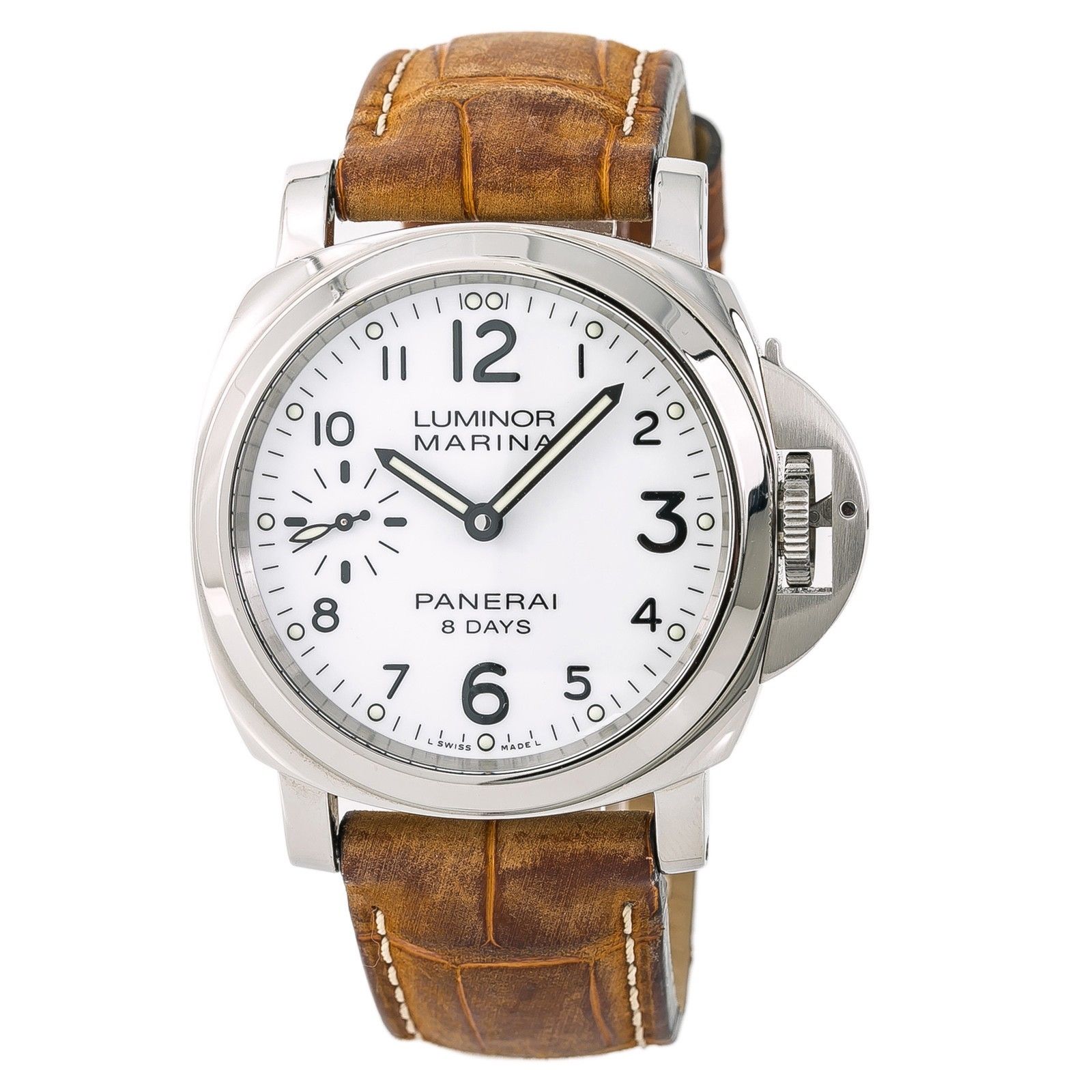