Michael Kors is world-renowned for its style, which dances along the line between dignified and daring: its pieces evoke a substantial feminine energy that lives at the root of every drive forward the modern luxury brand makes.

This magnetic flair is what attracts fashionistas to Michael Kors stores, and gives counterfeiters an incentive to make replicas of the brand’s products, especially their incredibly popular timepieces. In light of that, we’ve pulled together this guide to making sure that the watch you’re eyeing is authentic so you don’t waste your hard-earned money on a fake Michael Kors watch.

When the popularity of Michael Kors timepieces shot up circa 2013, the brand’s watch manufacturer Fossil had a difficult time keeping up the quality of the products when they had to fill enormous numbers of orders within a short span of time. As such, inconsistencies between watches of the same model were frequent. Because these are usually what clue you in to a fake watch, it can be more difficult to suss out a counterfeit Michael Kors than it would be a fake Rolex or fake Cartier. The following tips, however, should apply to most if not all Michael Kors timepieces.

Michael Kors does not have as high a price point, nor as high the prestige, as, say, Rolex—as such, counterfeiters will spend less time and money producing fake Michael Kors watches than they would more highfalutin luxury brands. When examining a watch you suspect could be fake, take note of the details. 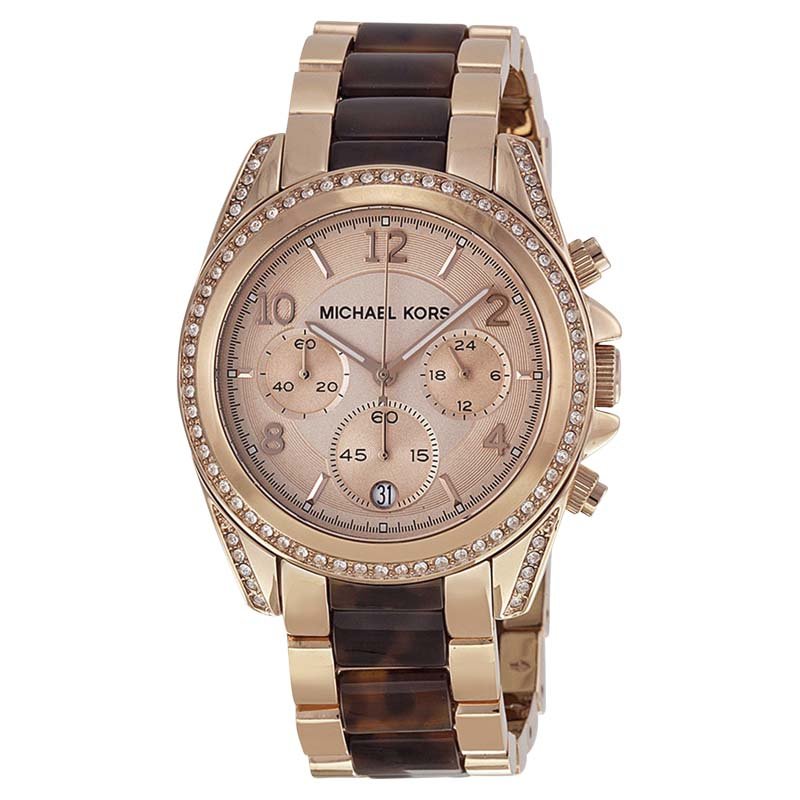 The face of a genuine Michael Kors watch.

The Michael Kors logo on the face of the watch should match the real logo of the brand perfectly; make sure the letters are spaced out evenly, made of high-quality metals, and, most importantly, they should spell out the brand’s name correctly. Counterfeiters will probably not put in the effort to apply each individual letter separately, so you will often find fake watches with the letters of logo connected at the bottom by the same metal they were made of—if the watch’s logo is connected that way, you’re looking at a fake.

If the watch has subdials, check to make sure they’re functional. Often, forgers will forgo the extra hardware that makes subdials functional to save money. In that vein, check to see that each subdial has a corresponding crown that controls it.

If the watch has more than one subdial, they should all be numbered differently, because they each have a different function. If two or more of the subdials on your watch are exactly the same, you have a replica on your hands. 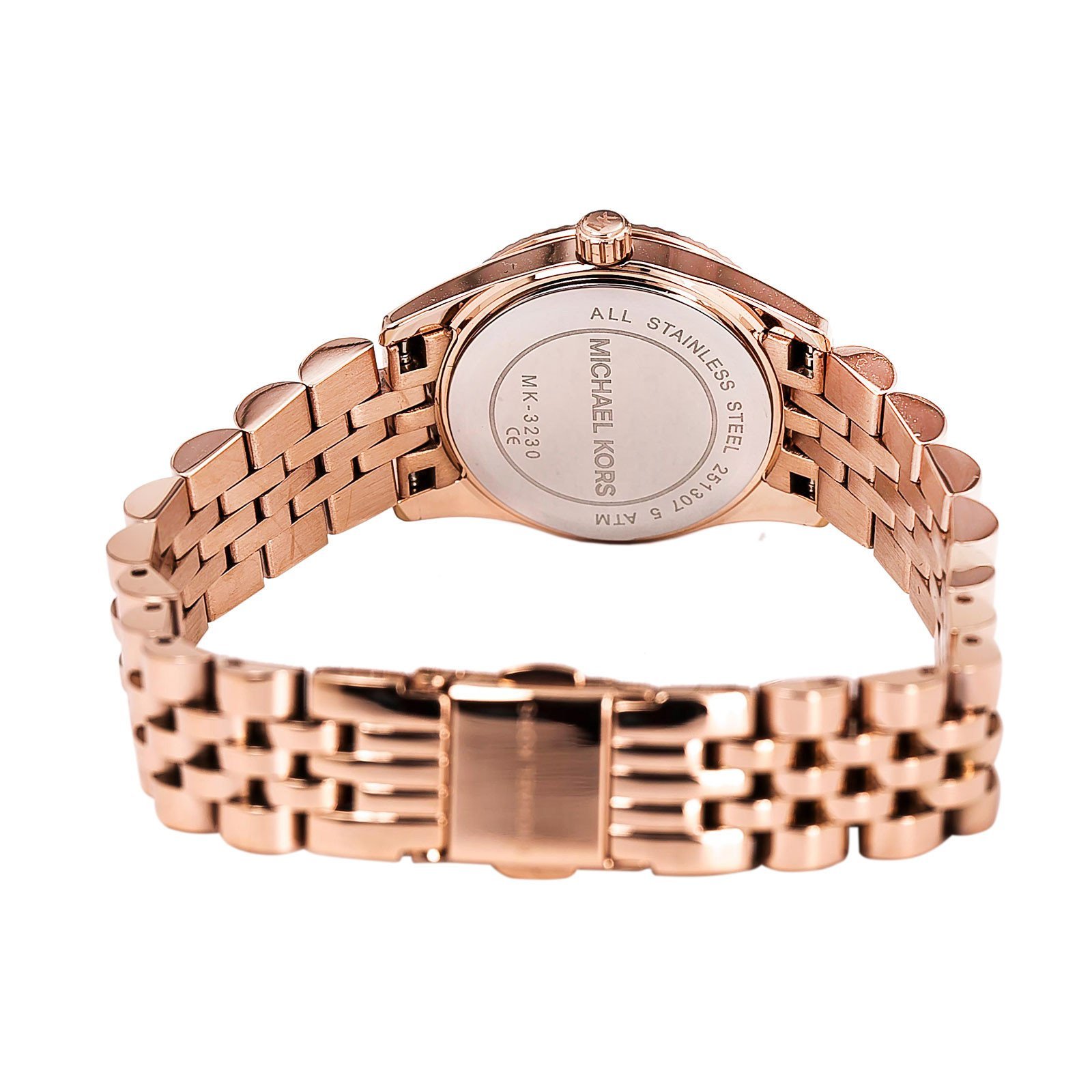 A genuine Michael Kors will have MK stamped on the crown and the watch’s details engraved on the caseback. In this case, this model MK-3230 indicates that it was produced on July 25th, 2013 and that the entire watch is made of stainless steel.

Michael Kors watches are designed so that they provide as much information as possible about the quality of the materials they were made with. As such, you will find engraved on the caseback of every genuine Michael Kors timepiece the following: the date of manufacture, a serial number and “all stainless steel” engraved into the metal.

The date of manufacture should be written as a 6-digit number in DDYYMM format. For example, if the watch was created on March 12th, 2015, the date would show up as 121503. Pay attention to this as counterfeiters will probably have it as MMDDYY, or in this case, 031215, which would be incorrect. Make sure to cross-reference the date with the model, as well, because if the date stamped was before that particular model was released, the watch is clearly fake.

The serial number stamped on the caseback should refer to the watch’s model number. It will be formatted like MK-5693 and you should be able to cross reference the number with a Michael Kors model. If the number doesn’t refer to any model, the watch is a replica.

Every Michael Kors watch will have MK engraved onto the crown. If the watch is missing the MK or if the engraving is low-quality or difficult to see, it’s a forgery.

If the watch has a crystal-set bezel, look closely and make sure the design is completely symmetrical. Each crystal should be set in perfect alignment with the rest of the design and there should be no pieces of glue visible, since they should set with metal that will not be visible. 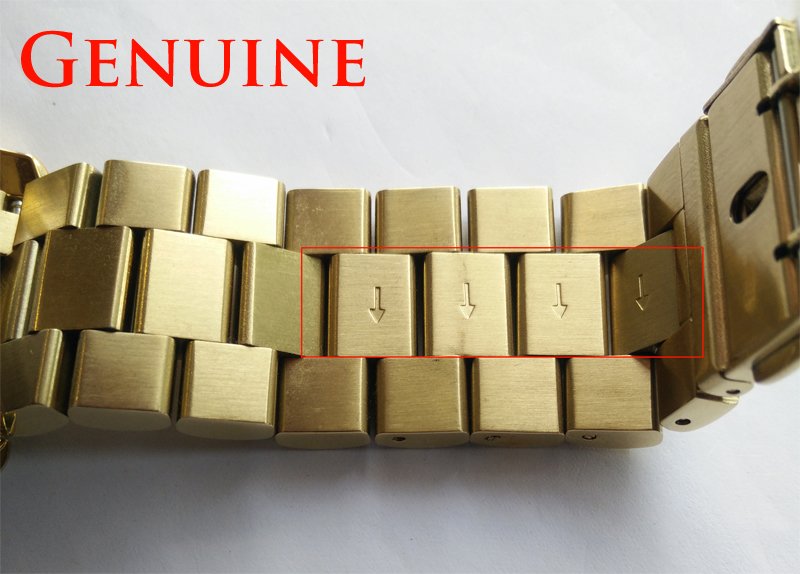 A stainless steel Michael Kors bracelet will have arrows on the removable links. Photo by eBay.

Michael Kors almost always uses PVD-coated stainless steel for their metal bracelets while counterfeiters will use very light, cheap tin alloys coated with latex. Not only will this affect the longevity and weight of the bracelet, but it also affects how the bracelet looks. The latex coating will bring out every imperfection in the tin alloy underneath it and will also make it susceptible to scratches, whereas the PVD-coated solid stainless steel that is used in genuine watches protect the metal and make it appear smooth and flawless.

Full stainless steel bracelets will also have arrows engraved on the underside of each removable link. If the watch’s bracelet is entirely metal—as opposed to designed with plastic-looking acetate inserts, as some Michael Kors models are—and it doesn’t have the arrows, it’s a replica.

As always, be sure to purchase from reputable vendors who can completely assure the watch’s authenticity. If you absolutely cannot be certain of the legitimacy of a watch, bring it to a jeweler who can open the piece up and tell you without a doubt whether it’s a genuine Michael Kors or not.