Home Brand Spotlight The Origin of the Cartier Panther Motif

The Cartier Panthère motif has been an integral part of the brand’s identity since the late 1940s. However, Cartier’s ties to its most elegant feline dates back to the early 20th century and was largely popularized and perfected by Jean Toussaint, an incredibly talented Cartier designer and visionary.

We trace the history of the Cartier Panthère motif from its Art Déco origins, through its rise into the world’s most fashionable circles.

The Panther’s Rise in Popularity
Throughout the 16th and 17th centuries, panther fur was a rare and valuable prize for hunters who coveted its patterned pelt. Its popularity quickly rose in the early 20th century. Interior designer Elise de Wolfe was commissioned to design and decorate New York’s newly built Colony Club in 1907. The Colony Club was the place for well-heeled society women to meet. De Wolfe’s décor received enthusiastic reviews that not only bolstered her career but the use of exotic animal skins and furs, like panther fur, in interior design. 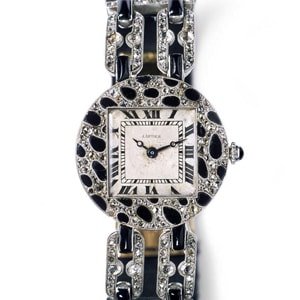 The trend spread into other fashion circles, including jewelry and accessories. For its own part, Cartier wove the panther’s distinct print into a bracelet wristwatch design in 1914. The watch was Cartier’s first use of the panther motif which was made with diamonds and onyx set in platinum.

The Influence of Jean Toussaint
Soon after, in 1917 Louis Cartier gave his lover, Jean Toussaint, an onyx vanity case that featured the maison’s first full-body panther, made with diamonds and onyx. This gift carried sentimental weight for the couple; Louis Cartier nicknamed Toussaint “La Panthère” after her elegance and striking determination—and finely decorated apartment that was bedecked with leopard skin. 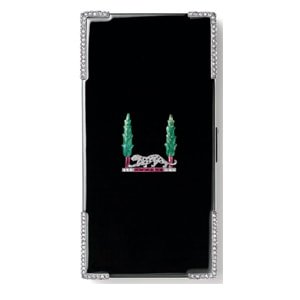 Toussaint became an integral part of the Cartier creative team, first as a handbag and accessory designer and ultimately as the artistic director of high jewelry in 1933. Her designs often incorporated the panther motif which she fine-tuned with the help of Peter Lemarchand, a designer who joined Cartier in 1927. The two collaborated to add shape and a dynamic sense of movement to the panther.

The Duchess of Windsor Panther Brooch
But the real breakthrough for Cartier’s panther motif came in 1948 when the maison debuted its first-ever three-dimensional panther. 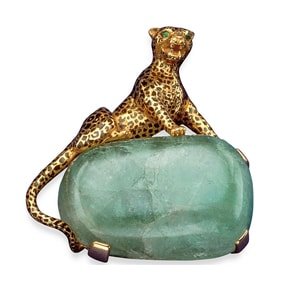 Cartier Panther Brooch, Commissioned by the Duke of Windsor, 1948

Commissioned by the Duke of Windsor as a gift for his wife, Cartier presented a brooch with a gold panther, flecked with black enamel with dazzling emerald eyes perched atop an impressive 116.74-carat cabochon emerald. The following year, the Duchess of Windsor commissioned another panther-themed brooch. This one was outfitted with a three-dimensional panther with pavé diamond fur and sapphire spots, posed above an enormous 152.35-carat cabochon sapphire. 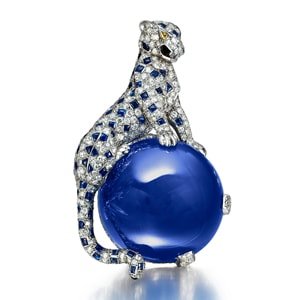 Cartier Panther Brooch, Commissioned by the Duchess of Windsor, 1949

These sensational pieces reignited interest in the panther motif. Other socialites and members of high-society including Daisy Fellowes, Princess Nina Aga Khan, and Barbara Hutton commissioned Cartier for their own impressive panther jewels.

The Cartier Panther Today
In 2014, Cartier celebrated the 100-year anniversary of its beloved panthère motif. The branded hosted a grand exhibition at the Grand Palais in Paris that included 56 of its iconic Panthère de Cartier bracelets, necklaces, rings and earrings. The signature Cartier panther has become a symbol of luxury and sophistication and highlights the fine craftsmanship and creative spirit of the Cartier brand. 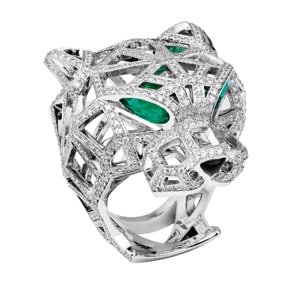