The Le Vian family’s early history in jewelry can be traced back over 500 years, a time marked by two pivotal periods. The early years, which began in the year 1500 and lasted for 250 years, revealed the family’s emphasis on design and workmanship, with jewelry and objets d’art that featured hand carving, hand painting, beading, engraving, enamel work, goldsmithing and silversmithing. It was in 1746 when the family recognized its future path in fine jewelry, as guardians of the jewels, when they were entrusted by King Nadir Shah to guard such priceless treasures as the Kooh-i-Noor diamond (which today is on display among the British crown jewels in the Tower of London), the Daria-i-Nur diamond, and the fabled Peacock Throne. It was from this moment that the Le Vian family learned their mission, to find the most beautiful gems and diamonds in the world and preserve them for future generations to enjoy.

The Le Vian family has placed many of its most special designs throughout its history into a collection called, “Le Vian Through the Centuries.” We take a look back at three of the early designs from this collection that set the foundation for the brand’s reputation today. 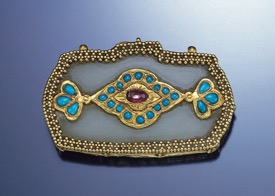 One of the earliest examples of the Le Vian family’s work is this exotic slide pendant, circa 1501. The pendant is made of a solid rectangle of jade adorned with a golden plaque. In the center is a rare, 1.5 carat oval, old mine-cut ruby, set in a field of ancient Persian turquoise, all hand-wrought within a thickly beaded frame of 22 karat gold.

“Face of an Angel” Jewelry Set, Sketched in the 18th Century 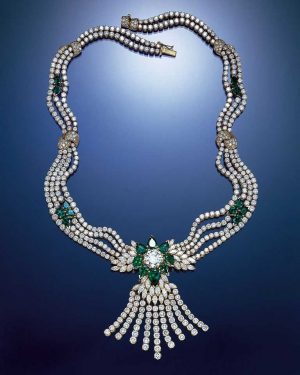 The Le Vian “Face of an Angel” jewelry set includes a matching necklace, bracelet, and earrings. This mesmerizing set, was originally sketched in the 18th century, features nearly 1,000 diamonds—each impeccably hand-set to move separately. At the heart of this parure is a set of dazzling emerald stones, totaling 12 carats, and a 5-carat VVS clarity diamond. It’s a breathtaking design and, relative to when it was first sketched, feels incredibly fashion-forward for its time.

The Le Vian Elephant, Crafted in 1746 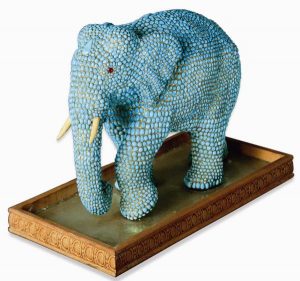 One of the most impressive pieces in Le Vian’s archives is this 11 x 12-inch elephant, hand inlaid with 6,602 pieces (12,000 carats) of natural turquoise from the now extinct Neishabur mine in Iran. Its eyes are each 2 carat rubies and its tusks are made of hand-carved ivory. This historic piece was originally crafted in 1746 as a tribute to the infamous and incredibly powerful King Nadir Shah who ruled Persia (modern day Iran) from 1737–1747.

This 40-pound elephant reveals the quality of the workmanship and extraordinary artistry and expertise of Le Vian at the time. Each stone is thoughtfully placed, arranged from dark to light to accentuate the elephant’s shape. The settings themselves foretell the technique of “invisible setting” developed in France in the 18th century, which became virtually a lost art until the 1900s when Le Vian artisans skillfully revived the technique.