Jewelry has been integral part of human culture since time immemorial. As such, those that survive the test of time often come with amazing histories that are definitely worth retelling, especially when the pieces in question are worth sublime amounts of money. The five most expensive pieces of antique jewelry and watches are rounded up here, along with a round-up of their fabulous past lives.

5. The Blue Belle of Asia 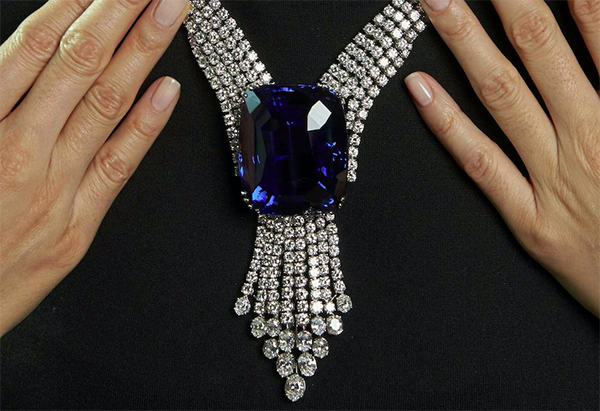 The Blue Belle of Asia sapphire, so named because of its luminous peacock blue hue and its origins in the gem basket of Sri Lanka, has quite the mysterious past. It was first found in 1926 in a Sri Lankan paddy field, after which it was cut, processed, and sold to British motor magnate Lord Nuffield in 1937. Rumor has it that he bought the sapphire to bring to Queen Elizabeth The Queen Mother (mother to Queen Elizabeth II, who reigns today) on the day of her coronation in 1937, but those claims are unfounded. In fact, the stone “disappeared” into private hands for over 35 years and resurfaced in the 1970s. The 392.52-carat,  cushion-cut sapphire was set into a diamond necklace and sold for a cool $17.3 million at a Christie’s auction in Geneva in 2014. 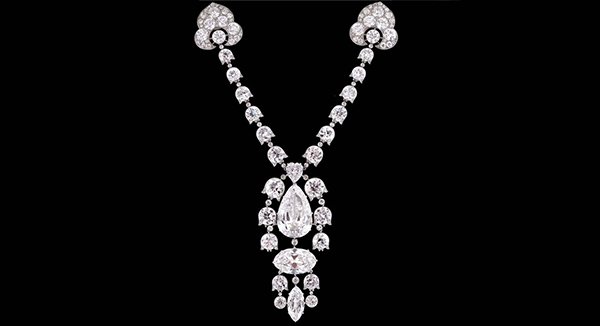 This beautiful brooch by Cartier debuted in 1912, when the brand’s design exemplified the aesthetic of La Belle Èpoque. The ornate, handmade piece features a 34.08 carat, pear-shaped diamond, a 23.55 carat, oval-shaped diamond and a 6.51 carat, marquise-shaped diamond in its centerpiece, which hangs from two lines of lily-of-the valley motifs connected to two palmette brooches.

The epitome of luxury, this brooch’s sumptuous design is matched only by its equally-lavish history. An Englishman named Barney Barnato moved to South Africa during the diamond rush in the 1870s and started selling cigars to miners. He worked and saved until eventually, he himself owned several mines. Barnato’s nephew Solomon joined his uncle in South Africa and took over the mining business in 1897. Once he made his fortune, he returned to England and the woman he loved. In 1912, he brought his four best diamonds to Cartier and had this opulent brooch commissioned for his sweetheart.

The piece was passed down Solomon Barnato’s family line and sold at auction twice before fetching $20 million at Masterpiece London. 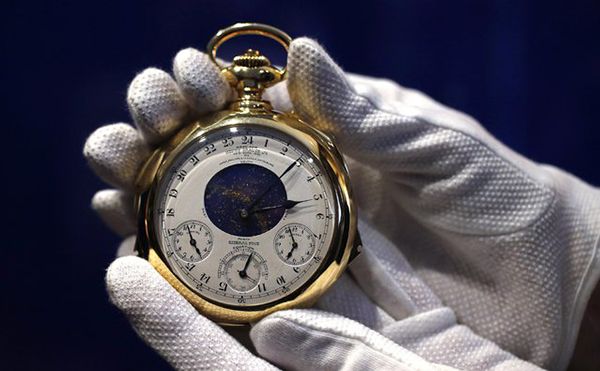 This Patek Philippe pocket watch may not be decorated with any precious stones, but don’t be fooled: this timepiece is worth a very pretty penny.  The Henry Graves Supercomplication was commissioned by its namesake, a banker and avid watch collector, in 1932 in an effort to outdo James Packard’s Grande Complication watch made by Vacheron Constantin. The Supercomplication has kept the title of most complicated timepiece created without the assistance of computers, boasting 24 complications in total, putting Packard’s Grande Complication, which was only outfitted with 10 complications, to shame. Graves’s timepiece included a map of the night sky as it appeared over Graves’s 5th Avenue apartment, Westminster chimes, a perpetual calendar, sunrise and sunset times and more. At a Sotheby’s auction in Geneva in 2014, the Supercomplication sold for an incredible $24 million. 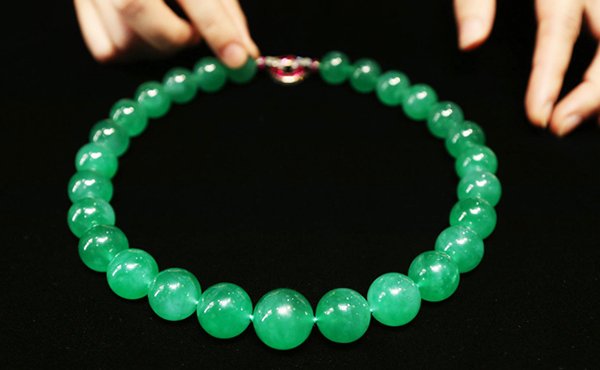 Jadeite is an extremely rare (and expensive) variation of jade. The mineral is believed to cure illness and keep the wearer in good health, which are qualities that many would pay top dollar for. This particular strand of jadeite beads was most recently sold to Cartier for $27.44 million at a 2014 Sotheby’s auction in Hong Kong. The exact age and origins of these beads are unknown, but their first appearance in society was in 1933, when the Cartier necklace was given to Barbara Hutton by Alexis Mdivani, a Georgian prince and her first husband.

This piece is composed of 27 jadeite beads graduating in size from 15.40mm to 19.20mm—impressive sizes for this rare mineral. The clasp is set with rubies and diamond baguettes mounted in platinum and 18k gold. 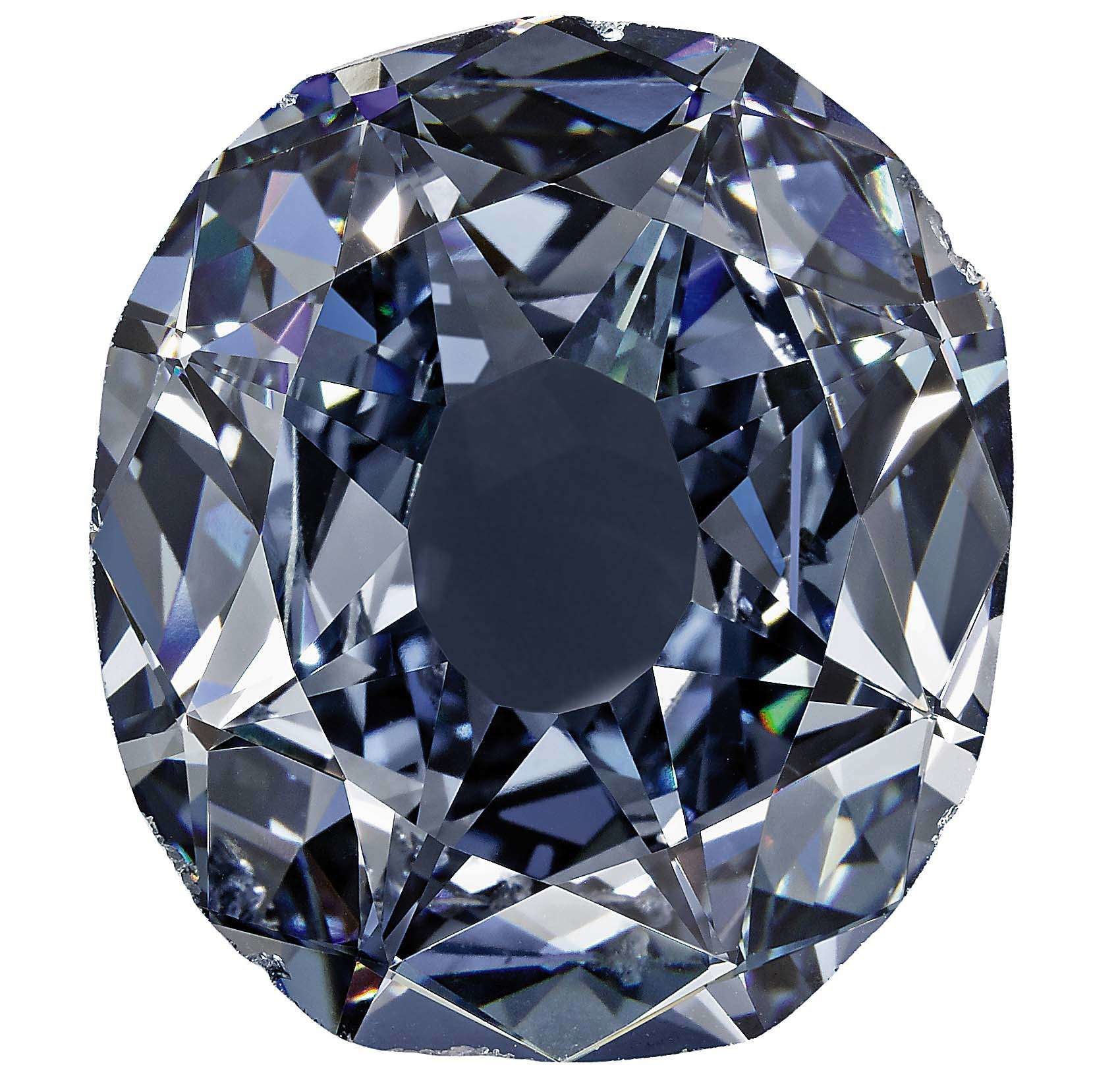 The Wittelsbach-Graff Diamond before it was re-cut in 2010.

In its original form, the Wittelsbach diamond was a 35.56 carat beauty with a fancy, deep blue-gray hue of VS2 clarity. It was first mentioned in the aughts of the 18th century as an asset of the famous Hapsburg family in Vienna. In 1722, the stone moved to Munich when Austrian Archduchess Maria Amalia married Charles Albert of the Wittelsbach family of Bavaria. Charles went on to become Holy Roman Emperor Charles VIII in 1742.

The diamond was first mounted in 1745 by Charles’s son and successor Maximilian I of Bavaria. The Bavarian king had the stone prominently displayed atop the royal crown, where it stayed until 1918. It stayed within the family until it was sold 1951, though they had been trying to sell it since the Great Depression. After the stone was bought, it changed hands several times: it passed between families, jewelry collectors, and even made an appearance in the World Expo in Brussels in 1958 before English jeweler Laurence Graff bought it in 2008 for $23.4 million.

Graff caused controversy when he announced he would cut the diamond to enhance its color and clarity and ended up shaving off a stunning 4.45 carats in the process. Critics claimed that this drastic reduction of the gem’s weight also reduced its historical importance. Ultimately, however, Graff’s alterations increased the value of the stone, which was reevaluated as a fancy deep blue and internally flawless.

In 2011, Graff sold the newly re-processed stone to the former emir of Qatar Hamad bin Khalifa Al Thani for at least $80 million.