Throughout the past couple of weeks, a number of important watch auctions by Christie’s, Phillips and Sotheby’s have yielded stellar results, proving that buying the right watch today could lead to nice profits tomorrow. However, what the auction houses never really talk about are the lots that don’t sell, and those that don’t sell for as much as expected – and they do exist. Just because you pay full price for a watch today does not mean that it will resell at the same price you paid for it. Sometimes, just like a car, it simply depreciates.

Experts agree that watches traditionally hold their value better than most other investments even in an economic slump, and they estimate that the right watch purchased today can appreciate in value as much as 10-30% in ensuing years. Generally, it takes a few decades for a watch to accrue value, though. Today, the most valuable watches on the re-sale market are vintage pieces made prior to 1980. Still, there are a host of reasons why some watches hold their value when others do not. And don’t be fooled, it isn’t just the precious-metal watches that sustain value; many a fine steel watch has captured six-digit figures at re-sale. In addition to the common-sense reasons such as constantly fluctuating global economies and geopolitical influences, there are five key reasons why a watch may appreciate in value over time.

Rare watches will generally command more money at re-sale. This fact is the result of simple supply and demand. If only 10 models of a particular watch are made today, for instance, then when that watch comes up for resale, and if it is a high-demand watch, discerning collectors will be ready to pounce.

Watches made in limited editions are also coveted because of their scarcity. Additionally, if they are scarce now, just think of how much harder they will be to find in decades to come. (After all, not everyone will be re-selling his or her beloved limited-edition watch in years to come.) Recently, a white gold Rolex Cosmograph Daytona, Ref. 6265 “Unicorn,” watch with black dial and a bark-finished white gold bracelet sold at auction by Phillips for $5.9 million because it was believed to the only one known of its kind.

While many of us don’t have the wallet for the haute horology one-of-a-kind pieces on the market, those will definitely hold value. Similarly, anniversary watches that celebrate a significant milestone the brand or the style’s history are also considered good choices. 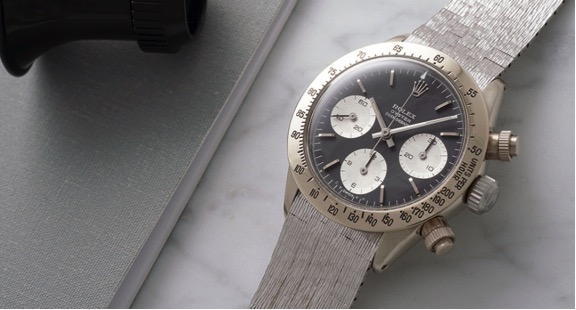 There is no denying that certain brands have a particular cache and retain their value better than others. Most of those brands are the cream-of-the-crop luxury Swiss watch brands including Patek Philippe, Rolex, Audemars Piguet, Vacheron Constantin, Cartier, A. Lange & Sohne, Richard Mille and Greubel Forsey. Moreover, certain lines or collections from these particular brands are more sought-after than others. For instance, a Patek Philippe Calatrava may command a higher price than some of the brand’s other lines. Similarly, the Daytona is the most sought-after collection from Rolex. 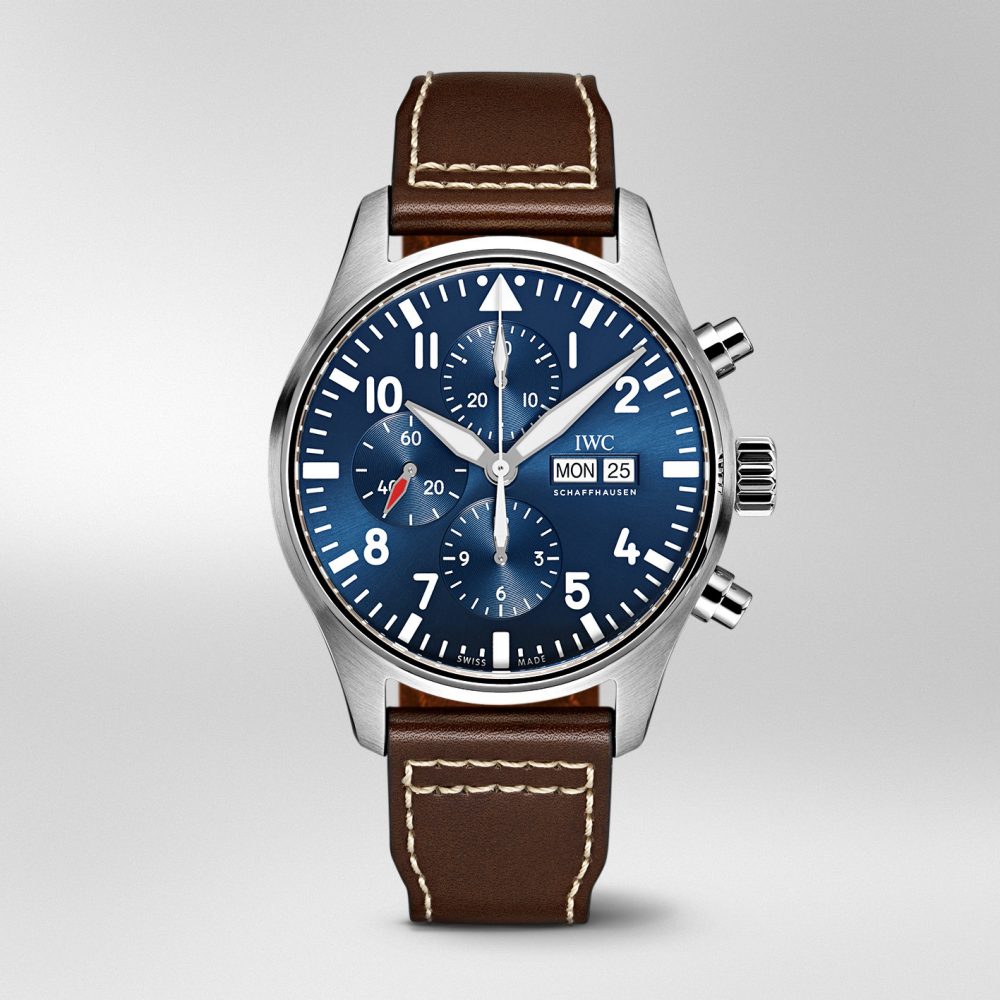 Military and aviation watches such as this IWC Chronograph often hold their value.

Typically in the world of watch collecting, certain genres of watches are particularly sought after; the most popular “sects” being pilot or aviation watches, diver watches, military watches and auto-related watches (such as the Rolex Datyona). Additionally, alarm watches and highly complicated watches that are produced in smaller numbers are highly coveted.

While every collector will tell you to buy what you love, there is no way to gauge resale value or value retention of a piece bought just for looks. Sometimes collectors buy styles they like but with a theme (think: all blue dials, all diver watches, or all gold watches) and can resell later at a premium as a complete collection. Additionally, new watches with a dial color that the brand rarely uses, or with a new or unusual motif or material can appreciate in value faster than watches with the more common dial color. A. Lange & Sohne, for instance, frequently releases dials with a white dial, so an A. Lange & Sohne watch with a rare blue or gray dial will be more coveted. 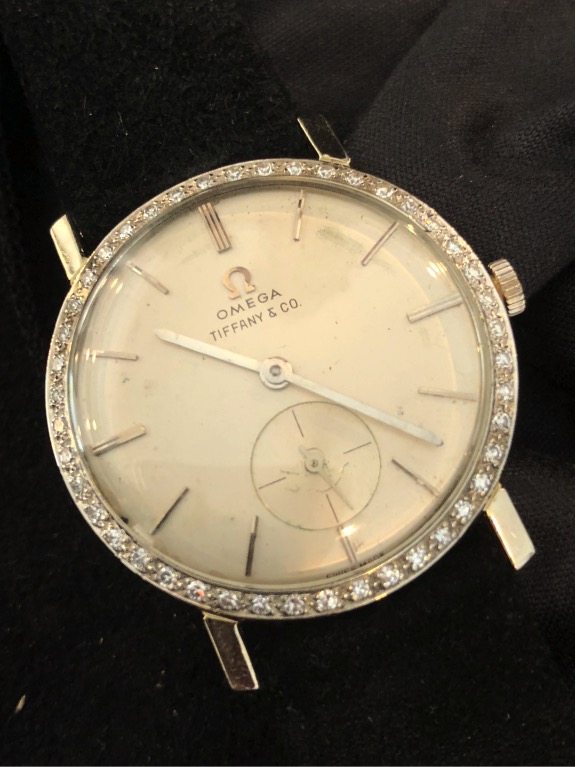 An Omega watch with co-branded Tiffany Dial that belonged to Elvis Presley sold for $1.8 million.

Certain watches are more valuable simply because of who owned them. Note: Unless you are truly the master of your destiny, you never know if you’re going to become famous one day, so this is not exactly an investment strategy– but it is worth noting that past owners will inflate a watch’s resale price tag.

For instance, Paul Newman’s Rolex Daytona fetched $17.5 million last year at Phillips auction. That watch’s incredible value was due in large part to the fact that it belonged to and was worn by the famed Paul Newman, who made the “Paul Newman Daytona” reference famous. Similarly, an Omega watch once owned by Elvis Presley and featuring a dial co-branded with Tiffany & Co., sold for $1.8 million – making it the most expensive Omega watch sold at auction. 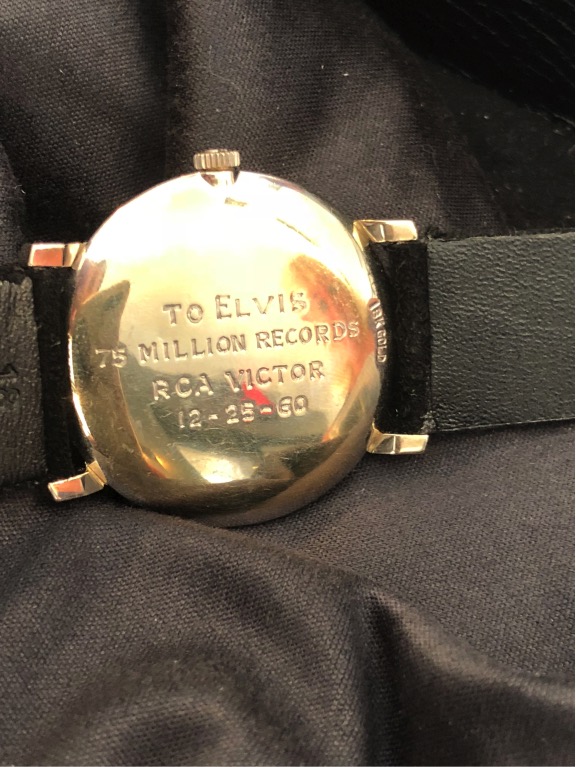 The back of the Omega watch belonging to Elvis Presley.