These watch brands may be lesser known outside of watch-collecting circles, their fascinating designs that build upon the long-standing traditions of watch making but totally reimagine traditional wristwatches. We take a look at some of the most innovative watch brands and their most avant-garde designs that will intrigue any onlooker, watch fan or not! 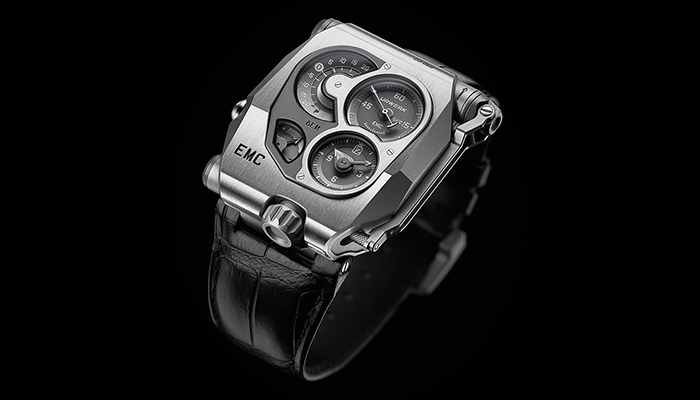 Founded in 1995 by Martin Frei and Felix Baumgartner, the independent Swiss-brand Urwerk is known for its incredible mind-bending, ornate, and fascinatingly complex designs.

Radically unconventional, Urwerk watches barely resemble a wristwatch in any traditional sense, but their design and complications are firmly rooted in classic watchmaking techniques. To wit, Urwerk’s first watch collection, the Urwerk-101, featured a wandering hour display, a complication that dates back to the 1600s, that shows the hour with a three-armed disc that points to the minutes which are listed on an arc-shaped track at the bottom of the watch case.

Urwerk continues to surprise and delight its fans with its unrivaled creativity. And, in 2014, the brand was awarded both the Innovation Watch Prize and the Mechanical Exception Watch Prize at the Grand Prix d’Horlogerie de Genève for its EMC watch that used their proprietary in-house EMC Movement that could measure the oscillation rate of the balance wheel and display the variance on a timing indicator.

2. Roger Dubuis Excalibur Knights of the Round Table 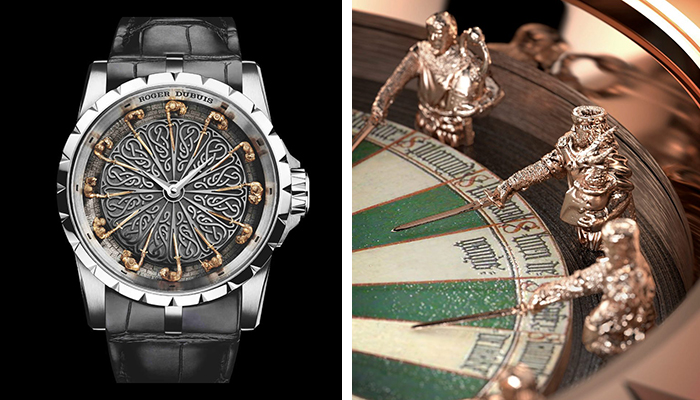 Roger Dubuis Excalibur Knights of the Round Table

Named after its co-founder Roger Dubuis, a highly skilled watch engineer who worked at Patek Philippe before breaking out on his own, the Swiss watch manufacturer Roger Dubuis takes a similar approach as Urwerk to combining time-honored complications with extremely creative designs.

Roger Dubuis boasts a thrilling collection of complex and intricate skeleton watches and women’s watches with dramatically stretched roman numeral hour markers. One of its standout designs is the Excalibur Knights of the Round Table which features 12 miniature knights, sculpted with immaculate detail, cast in 18K rose gold and arranged around a dial of black jade.

But what really distinguishes Roger Dubuis is that each of its watches meets the exacting standards of the Geneva Seal, a centuries-old award given by the Bureau Officiel de l’Etat Pour le Contrôle Facultatif des Montres de Genève to watches of the highest class that pass its rigorous processing and movement inspection. Roger Dubuis’s commitment to the highest level of quality and 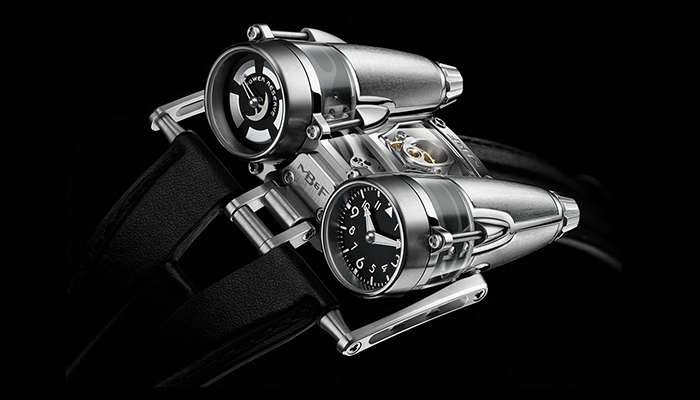 Independent Swiss watch brand MB&F is named after its founder Maximilian Büsser and his coterie of friends and fellow watchmaking innovators, including Peter Speake-Marin, Laurent Besse, and Eric Giroud. Backed by the experience and expertise of this watchmaking collective, MB&F has churned out some of the most impressive and innovative watches in recent history.

Aesthetically speaking, MB&F’s futuristic designs draw a lot of inspiration from science-fiction and engineering. One strong example of the brand’s eccentric watches is the HM4 Thunderbolt which is modeled after a World War II-era A-10 aircrafts with its dual engine-shaped “pods” (as MB&F refers to them) that display the time and power-reserve indicator.

Before we dive into Greubel Forsey, a quick refresher: the tourbillon was developed in 1795 and patented in 1801 by Abraham-Louis Breguet. To greatly simplify, gravity can throw off the timing regulator of a watch; a tourbillon aims to counter the drag of gravity by placing the timing regulator for the escapement into a rotating cage to make an overall more accurate timepiece. Today, tourbillons are generally considered more of demonstration of watchmaking know-how than a necessity to improve accuracy.

Greubel Forsey’s watches largely center on the tourbillon escapement which the brand continues to incorporate into their designs in increasingly novel ways. One standout model for the watchmaker is the Tourbillon 24 Secondes which, without delving too far into the mechanics, features a fast-rotating tourbillon, positioned at a 25-degree angle, to make for an even more precise tourbillon.

In turn, Greubel Forsey has received industry-wide praise for its technical achievements in haute horology with multiple awards from the Grand Prix d’Horlogerie de Genève and Watch World Awards in the brand’s short lifetime.