Home News 10 Top Golfers and the Watches They Wear

We are in the height of the great golf season with the PGA Golf Tour in full swing (pardon the pun). In these last couple of months leading up to the famed Ryder Cup, and with purses ranging from $6 million to $9 million, we will witness some of the finest golfers in the world on the courses competing for the championship win.

Many of those golf celebrities are also brand ambassadors for some of the finest watch brands in the world. Both golf and watchmaking require precision, excellence, and style. Here we take a look at 10 top golfers and the watches they wear.

Rolex Wearers
Rolex has also had a long and storied relationship with the world of golf and has been deeply involved in the sport for more than 50 years. It partners with and sponsors some of the most important tournaments in the world, including the President’s Cup, and has acted as official timekeeper of the Open for 30 years. It also initiated the European Rolex Series Tour. The brand has aligned with some of the greatest golfers of all time, including the “Big Three”: Arnold Palmer, Gary Player, and Jack Nicklaus. Its list of brand ambassadors reads like a “Who’s Who” in golf, with mega winners such as Tiger Woods and Phil Mickelson, as well as New Guard golfers like Justin Thomas, Rickie Fowler, Jordan Spieth, Lydia Ko, Brooke Henderson, and Anna Nordqvist, among others on its roster. 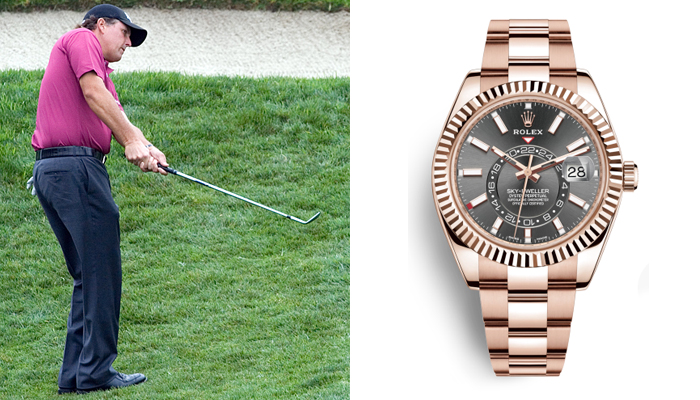 Famed American golfer Phil Mickelson has won five Majors, three Masters, and 43 PGA Tour events in total. The lefty player has been playing in Cellini watches for many years, but he also wears a host of different Rolex Oysters off the course, including the Rolex Sky-Dweller in Everose gold. 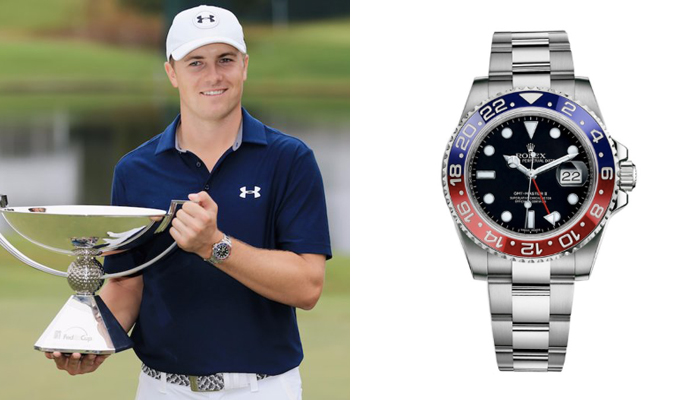 The 24-year-old three-time Majors champion, Jordan Spieth, has been seeing wearing a Rolex Explorer II, and a Rolex “Pepsi” GMT Master II. As a Rolex brand ambassador, he dons his watch immediately after play. 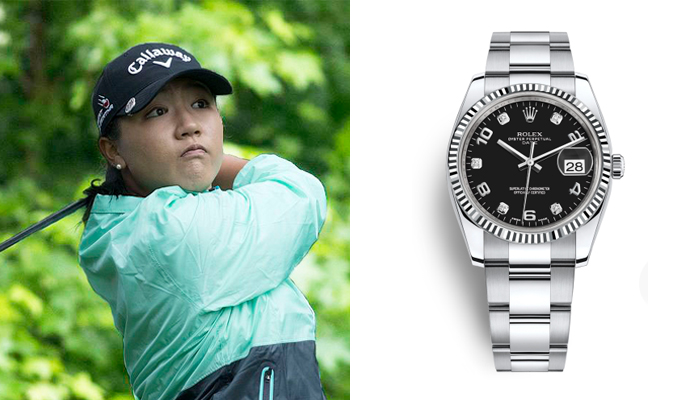 Lydia Ko, also a Rolex brand ambassador, is ranked 17 on the Ladies Professional Golf Association leaderboard. The now-21-year-old Korean-born New Zealander became the youngest player to be ranked No. 1 in professional golf in 2015 when she was 17 years old. She has been seen wearing the iconic Rolex White Rolesor Date 34.

Omega Wearers
Since 2011, Omega has been positioned as the PGA of America’s official patron and official timekeeper, though the brand also serves as the official timekeeper for other significant golfing events around the world. As such, it stands to reason that the brand would have some strong golfers on its roster. 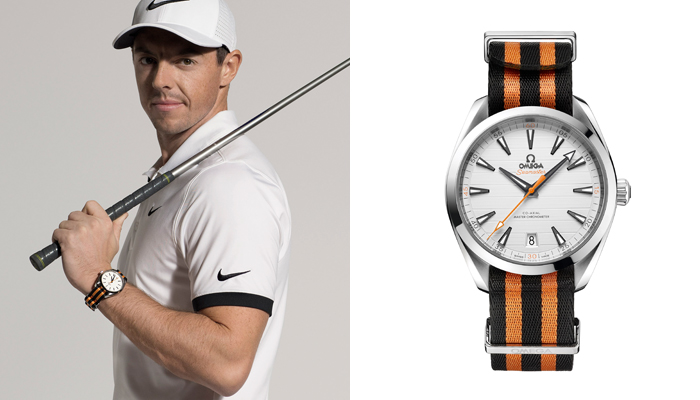 Ireland’s Rory McIlroy, winner of four Majors since turning professional in 2007, is an Omega brand ambassador. He wears the orange-and-black-strapped Omega Seamaster Aqua Terra Golf watch. The 41mm watch is crafted in steel and has a silvered dial. 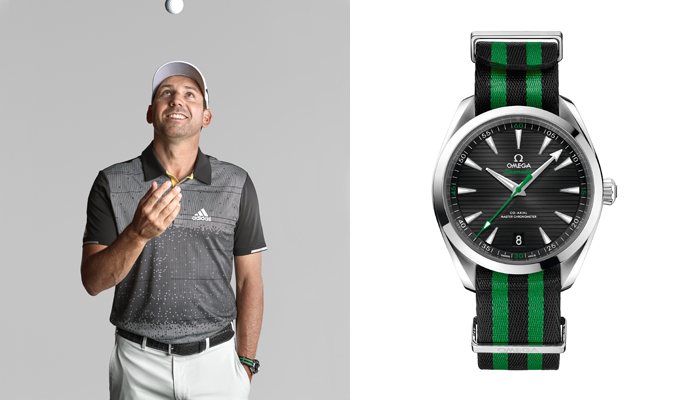 Sergio Garcia, winner of the Masters in 2017 (and the coveted green jacket), holds 10 PGA Tour wins and 21 international victories. The Spanish-born golfer is considered one of the most successful Ryder Cup golfers in history. He is also an Omega brand ambassador. He wears the Seamaster Aqua Terra Golf watch with black dial and green-and-black-striped NATO strap. 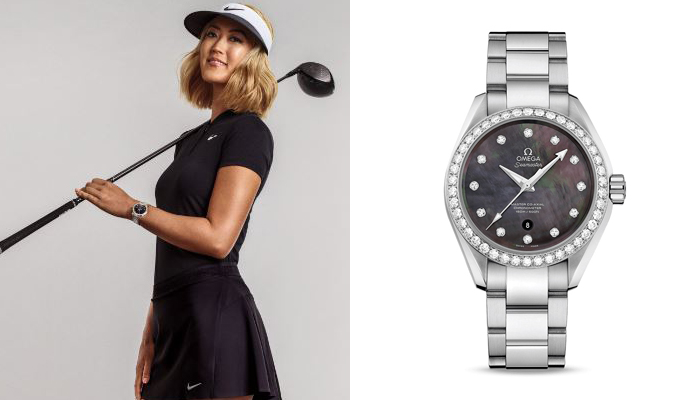 Female golfer Michelle Wei was the youngest player ever to qualify for an LPGA tour event at the age of 13 and is a consistently strong player with several victories under her belt, including the HSBC Women’s World Championship earlier this year. She wears the bracelet version of the Seamaster Aqua Terra 150M Omega Master Co-Axial 34MM.

Audemars Piguet Wearers
Another big brand involved in golf is Audemars Piguet, with nearly two dozen top golfers on its roster that run the gamut from Danny Willett to Henrik Stenson and more. 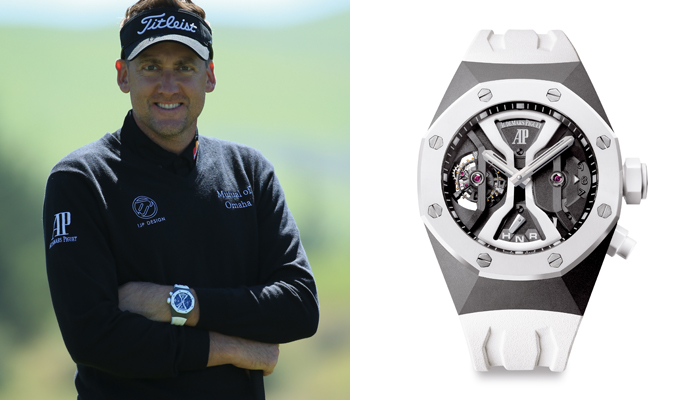 Incredibly active on social media, British golfer Ian Poulter wears exceptionally elegant golf clothing on the course. He is a brand ambassador for Audemars Piguet and owns many of the brand’s watches. Most recently, he has been seen wearing the Audemars Piguet Royal Oak Concept GMT Tourbillon. 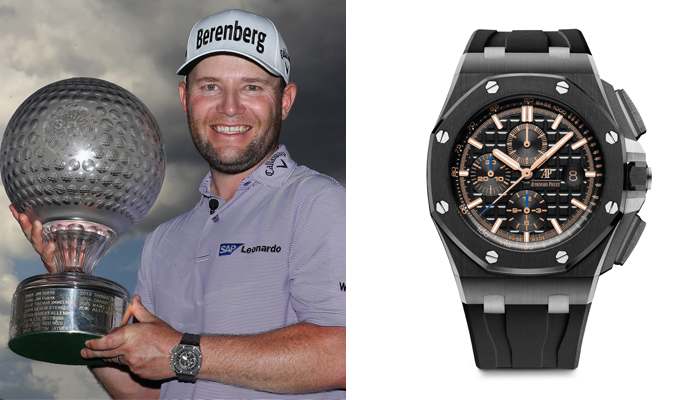 South African Branden Grace, who became the first male golfer to score 62 in a major at the 2017 Open Championship in South Africa, is currently ranked 35th on the PGA Tour. He is an Audemars Piguet brand ambassador and wears a Royal Oak Offshore Chronograph. He even Tweeted about it! 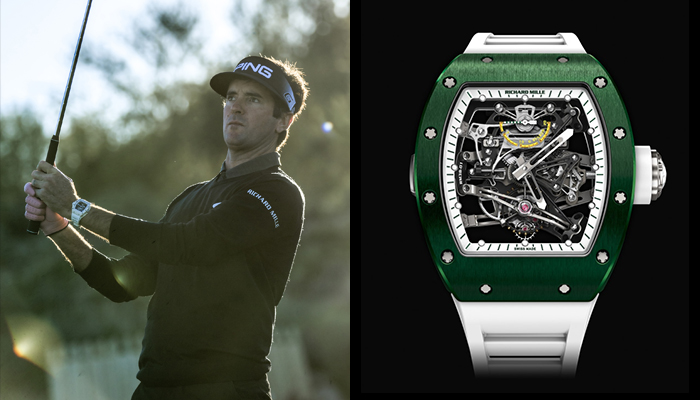 Golf great Bubba Watson is a Richard Mille brand ambassador. Like all Richard Mille brand ambassadors, he wears his watch during play. That watch is the RM 38-01 Tourbillon. Bubba Watson uses its patented G-sensor to measure his powerful swings. The first version was all white; the new version is white with a green ceramic TZP bezel, matching Bubba’s two green jackets from his Masters wins and his favorite color. Just 50 timepieces will be made. 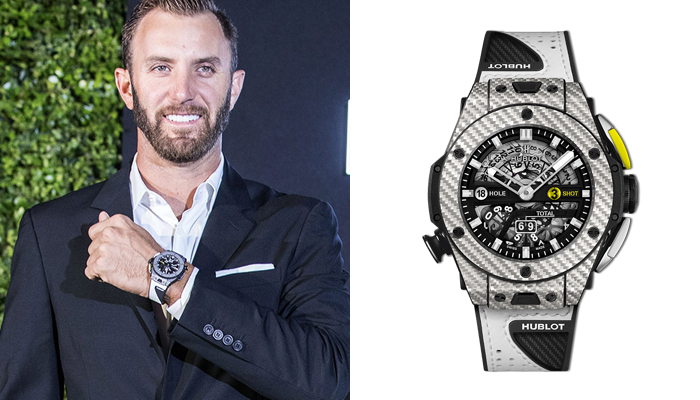 Golfer Dustin Johnson wears the relatively new Hublot Golf watch. It is the world’s first mechanical watch created for golf. Powered by an in-house made movement, the watch enables golfers to calculate their scores on the course. Ultra lightweight, it features an aperture that displays the scores per hole.