Home News 10 Fun Facts About The Kentucky Derby and Longines, the Official Timekeeper – From Someone Who Was There

Justify, ridden by jockey Mike Smith, wins the 144th Kentucky Derby, the wettest in history, on Saturday, May 5, 2018, at Churchill Downs in Louisville, Ky. (Photo by Diane Bondareff/Invision for Longines/AP Images)

This past Friday and Saturday in Louisville, Kentucky, nearly 160,000 people – including me — converged on Churchill Downs racetrack for the 144th running of the Kentucky Derby — where Longines was on board once again as the Official Timekeeper. With a Longines clock stationed at the finish line nearby the race clock, and in the sloppiest rainy weather conditions, a very muddy 3-year-old colt named Justify raced to the finish of the Run for the Roses – taking the near $2 million purse. According to the Longines timing clock, 52-year-old jockey Mike Smith rode Justice around the 1-1/4-mile track in 2 minutes and 4 and 1/5th seconds.

The entire weekend was a huge festival of fun, fashion and feverish betting (approximately $200 million was bet this weekend at Churchill Downs). Even the relentless rain on Sunday – the actual derby day – couldn’t keep people away. Gift shops sold tens of thousands of plastic raincoats, food stands sold hundreds of thousands of hot dogs and barbeque ribs, wings and more, and visitors sat on water-drenched bleachers or on wet grass and even mud out in the infield – all to witness the “fastest two minutes in sports.”

Of course, there is also a truly elegant side to the Kentucky Derby, where women don big, beautiful hats, men dress to the nines and celebrities galore walk the red carpet. In addition to “Millionaires Row” where the owners sit, Churchill Downs has built impressive structures on the property that house suite after luxury suite for viewers to watch the race in style. There is even a six-level “Mansion” trackside, with each level boasting its own incredible atmosphere.

I must admit that I was smitten by the elegance and excitement of the Derby. Each day I was decked out in cocktail attire and big-brimmed hats or fascinators. I imbibed in the official drink of the derby, helped contribute to the $200 million plunked down on the ponies, and got up close to the valuable trophy and generally had a blast with Longines. I believe that everybody should attend a Kentucky Derby– always held the first Saturday of May and never yet canceled for inclement weather – at least once in their lifetime.

Here, in addition to all of the above information, are 10 fun facts about Longines and the Kentucky Derby so that you can convince your friends that should all attend next year’s Derby. 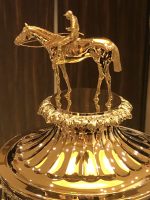 2, It is also lovingly called “The Run for the Roses” because of the huge blanket of roses given to the winner. It is made using more than 400 roses and weighs about 40 pounds.

4. The official drink of the Kentucky Derby is the mint julep, which costs about $11 at Churchill Downs and more than 100,000 are sold during the weekend. There is also a very exclusive limited edition of the cocktail made by Woodford Reserve costs $1,000.

Longines Conquest V.H.P. watch is the Official Watch of the Kentucky Derby.

6. Longines has been the official timekeeper and the official watch of Churchill Downs and the Kentucky Derby for seven years, since 2011.

8. There is one main Longines chronometer that actually times each race and does not display the actual time of day.

9. The Official Watch of the Kentucky Derby this year is the Longines Conquest V.H.P. (very high precision) with a blue dial and red accents. The 43mm men’s version is crafted in steel and retails for $1,050. The owners, the trainers and the jockey of the winning horse all receive a Longines Conquest V.H.P. quartz watch. Longines has one of the longest histories in quartz technology, dating back to 1954, when it developed a quartz clock that set precision records at the Neuchatel Observatory.

The original Longines pocket watch from 1878 inspired by the equesrtran world.

10. Longines has been inspired by and active in the equestrian world since it created a chronograph pocket watch engraved with a horse and jockey in 1878 that quickly became a coveted watch amongst horse lovers and jockeys.