A Closer Look at the Graham Chronofighter’s Signature "Trigger" Technology 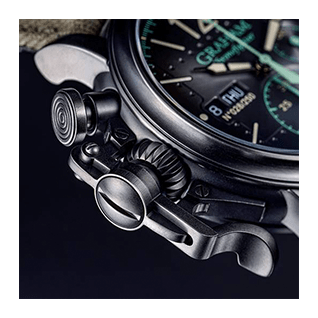 Swiss watch brand Graham 1695 actually traces its roots back to 17th century British watchmaking, when founder George Graham created clocks of a pretty significant scientific nature. In fact, he built the first clock that could measure the duration of events. Inspired by that clock, and by watches worn by the aircrews of RAF Bomber Command in World War II, Graham (in the early 2000s) created the Chronofighter series of watches as a signature pillar for the re-launched brand and equipped it with the unique patented Trigger Technology Chronograph system. Here we take a closer look at the unveiling of the Chronofighter and the design and functions of the Trigger Technology.

Essentially, Graham’s patented Trigger Technology is not only a crown protector, but also (and more importantly) is a start and stop button for the chronograph of the Chronofighter watch. Instead of offering two pushbuttons (one above and one below the crown as on traditional chronographs) or a mono-pusher button, the Chronofighter has a trigger-like device over the crown.

To activate the chronograph functions, the wearer simply squeezes the trigger (pushing it in toward the watch case) to begin the stopwatch function and squeezes it again to stop the timing. There is a small pusher on the case side above the crown and trigger that is pushed to reset the counter to zero. The crown, trigger and reset device are strategically placed on the left side of the case for ease of use of the chronograph with the right hand. 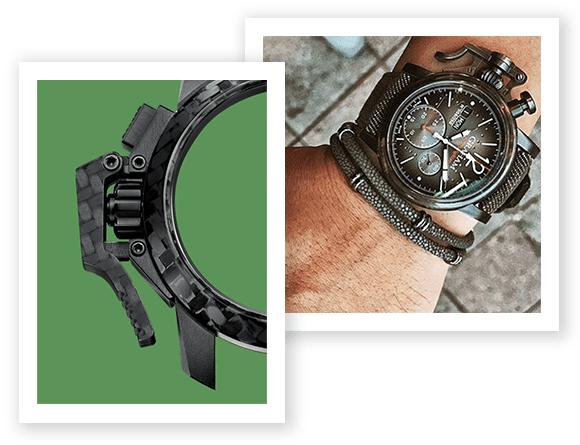 The Inspiration of the Trigger Technology

Inspired by the stopwatches used in the 1940s by pilots to time air raids and synchronize flight plans, the Chronofighter trigger system also recalls the trigger system that George Graham incorporated into his clocks to measure durations of events. Graham’s system was a clutch system that disconnected the balance wheel when the chronograph timing started, so as not to affect the timekeeping of the clock. In Graham’s original clocks, the mechanism was also activated with a trigger-like lever.

The dual inspiration for the Trigger Technology (Graham’s clock and WWII pilot watches) resonated with the owners of Graham, who had purchased the brand name in the 1990s (with the intention of building the brand based on the rich British history) and officially launched it at the Basel watch show in 2000. A few years later, in the early 2000s, when the brand was looking to create something truly unique that could become the signature pillar collection, these influences came back into play.

The brilliant move to create a single-pillar icon collection for the brand inspired by military and pilot watches, and combined with a unique triggering device to operate the chronograph, yielded incredible success for Graham. Not only is the chronograph start/stop function unique, but also the look of the Chronofighter is unique. The brand deftly combined the Trigger Technology system with vintage design elements, including a large 44mm case, easy readability, and luminescence, as well as a sophisticated high-performance automatic chronograph movement. The result is a, highly functional chronograph that is immediately identifiable from across a crowded room.

Roberta Naas is a veteran watch and jewelry industry insider and influencer. A journalist with more than 30 years in the field, Naas pioneered as the first female watch writer in America. An award-winning writer, she travels the world to uncover stories, conduct interviews, and bring the newest watch and jewelry information to the forefront. She has authored six books on watches, writes for such esteemed publications as Forbes and Elite Traveler, and is the founder of www.ATimelyPerspective.com.