At first blush, the Rolex GMT-Master and GMT-Master II appear to be the exact same watch. They both feature a sleek black dial and a rotatable bezel to quickly read a second time zone.

So what exactly is the difference between these two models? Here’s how you can distinguish a Rolex GMT-Master from a GMT-Master II.

The History of the Rolex GMT-Master
First issued in 1954, the Rolex GMT-Master was originally designed for Pan American Airways pilots and crews for their long-haul and international flights. The watch borrowed its named from Greenwich Mean Time (GMT), which, at the time, was chosen as the world’s time standard and was a crucial part of aeronautical calculations.

The Rolex GMT-Master was a breakthrough for PanAm pilots: the rotating bezel allowed them to set the watch to GMT, then turn the 24-hour scale bezel to set the offset and effectively read a second time zone.

After the Rolex GMT-Master was introduced, the design remained largely unchanged with only a handful of updates to improve its durability. In 1956, the luminous Bakelite bezel was replaced with a stronger metal bezel. Later, in 1959, a crown guard was added and the dial inscription included, “Superlative Chronometer Officially Certified.” The Rolex GMT-Master was also offered in gold and gold and stainless steel with new bracelet options including leather, oyster and jubilee bracelet. 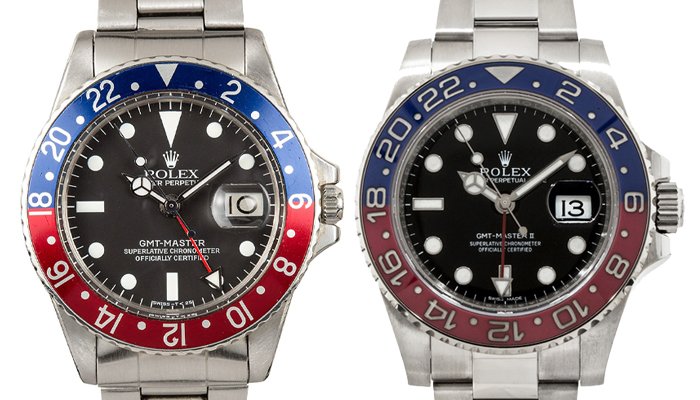 In more concise terms, the GMT Master has a quickset date and relies on the rotatable bezel to read the second time zone. Meanwhile, the GMT Master-II has independent hour-hand and 24-hour hands in addition to the original rotating bezel that allows the wearer to compute a third time zone. In order to fit the updated movement, the GMT-Master II is slightly thicker than the original GMT-Master; this is the only real visible difference between the two highly similar watches.