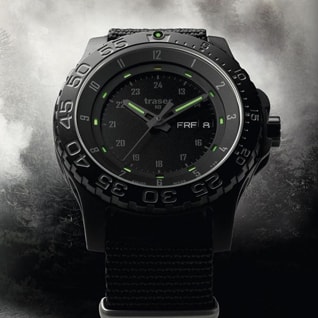 Billing itself as a brand that makes “functional watches for smart people,” Traser Swiss H3 Watches creates some of the most advanced tactical and active lifestyle watches on the market. The brand’s proprietary self-powered illuminating technology, trigalight®, enables its watches to glow stronger and brighter in the dark – transforming them into the perfect tool on the wrist. Traser’s impressive technology has made it a reliable and durable favorite among adventurers and military members, namely the brand’s ambassador, former Navy SEAL and Lone Survivor author Marcus Luttrell.

In the late 1980s, the US Army asked mb-microtec (the now nearly 50-year-old company that makes illumination capsules for watches and parent company of Traser) to create an instrument watch that could meet their MIL-W-46374 F military specifications, which included requests for a rotating bezel and hack function to synchronize time across multiple watches.

That first watch, the P6500 Type 6, was supplied to the US Army in 1989 and contained Mb-microtec’s brainchild, trigalight®. The trigalight® technology was a breakthrough for mb-microtec: unlike former illumination watches that needed the sun or another external light source for charging, the trigalight® system is wholly self-contained and relies on a self-activated phosphor powder chemical reaction to emit light and vividly glow.

As a result of that development, mb-microtec spun out the Traser watch brand as its own division and demand from adventurers and the military grew. 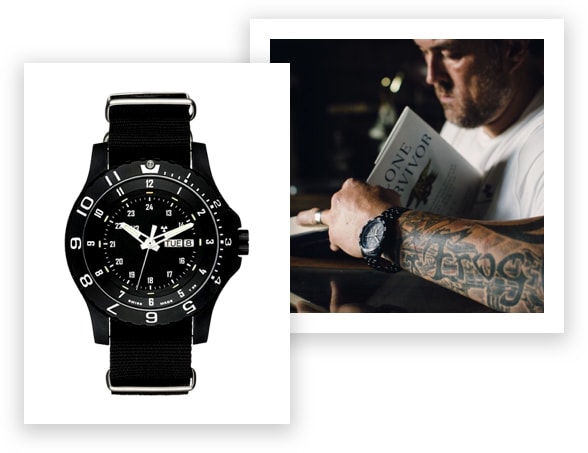 Underscoring its military-grade instrument status, Traser has a strong collaboration with American hero Marcus Luttrell. Known as “The Lone Survivor,” Luttrell is a retired US Navy SEAL. In 2005, Luttrell was on a mission in Afghanistan in which he and an elite force of three other Navy SEALs made the fateful decision to allow the goat herders who had seen the team—and could therefore divulge the team’s location, compromise the mission, and put the SEALS in mortal danger—to live. In the end, terrible battles ensued, and Luttrell was the only SEAL to make it out alive. He battled with that survivor status for years, until he finally wrote his memoir Lone Survivor, which was later turned into a hit movie.

Traser’s head of US distribution, Mark Wasserman, had seen Luttrell in a television interview and asked to meet Luttrell during an exhibition in Texas in 2016. “I was impressed by [Luttrell] when I saw him on TV and thought he would be a perfect fit for Traser, since he is an American war hero, a Texan, and a true patriot,” says Wasserman. He was right: it was a good match, and Luttrell joined as a brand ambassador.

According to Luttrell, who owns several Traser watches, including the P6 Type 6 Mil-G watch, “Traser Swiss H3 watches and myself, we have many common values and that’s why it is no coincidence that two parties found each other. Values like perseverance, precision, reliability, fighting spirit and the aim to give always the very best [are what we both share]. I [also] admire the functionality, the legibility in darkness and the ruggedness of this special timepiece.”

While it offers a retro-styled classic collection, Traser’s real strength is in watches designed for true outdoor use. In fact, the Tactical Adventure collection features watches that are a deft blend of high-tech, rugged materials, robust designs, added functions and the bold Trigalight® technology that is perfect for mountain climbing, diving, camping and more. Luttrell’s watch of choice is from this series, which is also the go-to collection for many of the brand’s other ambassadors who are active adventurers, including some well-known surfers, mountain bike cross-country riders, and others.

Roberta Naas is a veteran watch and jewelry industry insider and influencer. A journalist with more than 30 years in the field, Naas pioneered as the first female watch writer in America. An award-winning writer, she travels the world to uncover stories, conduct interviews, and bring the newest watch and jewelry information to the forefront. She has authored six books on watches, writes for such esteemed publications as Forbes and Elite Traveler, and is the founder of www.ATimelyPerspective.com.