Cartier has designed countless iconic and unbelievable accessories. From royal jewels to exotic gems, the elaborate and intricate designs have always impressed the world. Take a look at 10 of the most famous Cartier jewelry pieces from the 19th century. 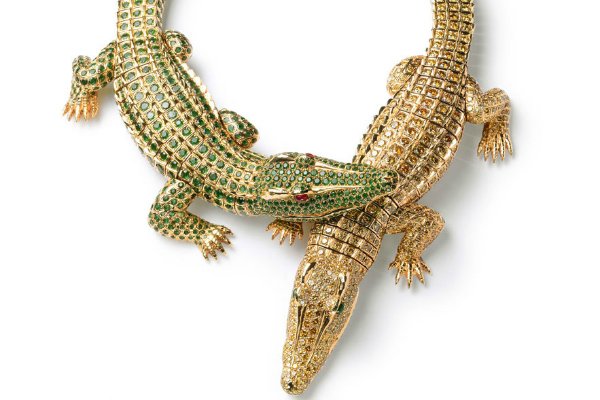 This elaborate crocodile necklace was commissioned by Maria Félix in 1975. Félix was a movie superstar throughout the 1940s during the heyday of Mexican cinema. She was also a high-fashion devotee—her wardrobe included custom pieces by Givenchy, Balenciaga and Chanel—and a fine jewelry collector. Her vast collection of jewels included custom Cartier pieces and even the 41.37 carat Ashoka diamond once owned by Harry Winston.

In 1975, Félix sauntered into the Cartier store carrying a fishbowl with tiny live crocodiles and requested the jewelers fashion her a necklace modeled after the reptiles. The designers returned her a necklace and brooch hybrid with two crocodiles that wrapped around the neck and clipped together. One half of the crocodile pair was made with 1,023 yellow diamonds, weighing in at 60.02 carats total; the other was made with 1,060 emeralds which tipped the scales at 66.86 carats total. 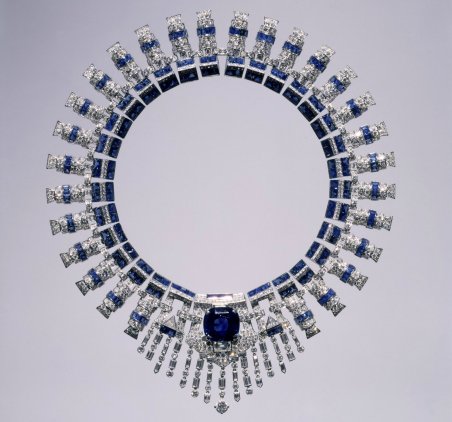 Born in 1887, Marjorie Merriweather Post was a prominent Washington DC socialite and the head of Postum Cereal Co. Merriweather had an incredibly posh lifestyle with homes in Palm Beach and the Adirondacks, the largest privately own sea-going yacht in the world, and an impressive fine jewelry collection which included the tiara Napoleon I gave to his second wife and a pair of diamond earrings once owned by Marie Antoinette. Merriweather was also a loyal patron of Cartier and bonded with Pierre Cartier over their shared love of Russian imperial art.

After her then-husband was appointed the ambassador to the Soviet Union by President Roosevelt in 1936, Merriweather adopted a comparatively subdued image. Eschewing her usual jewels, she asked Cartier to design her a necklace made from two diamond bracelets and a sapphire brooch which joined the two bracelets together. While it sounds over the top (and by most standards would still be considered quite lavish), she would break apart the necklace into the more modest bracelets to rotate into her wardrobe for different occasions. 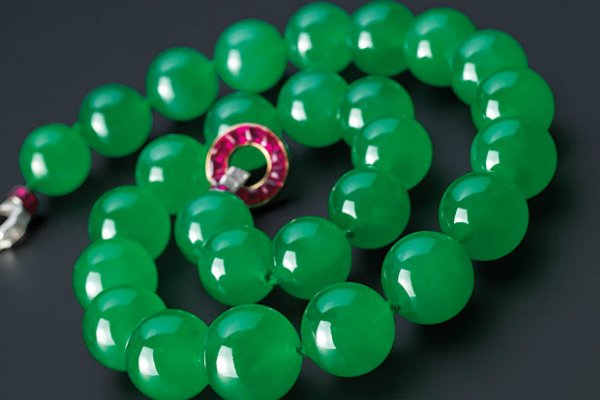 This necklace belonged to famed Woolworth heiress Barbara Hutton (1912-1979). At the height of her celebrity, she was worth an estimated $1 billion in today’s dollars, but, by the time of her death, Hutton’s coffers had dried up and she was bankrupt. To cover her debts before her death, Hutton sold much of her jewelry collection, but a few items have come up again for auction, including this jadeite necklace.

Hutton had received this exquisite jadeite necklace from her father to celebrate Hutton’s marriage to Prince Mdivani. The necklace was made of 27 graduated jadeite beads which are considered among the finest of the world: highly translucent with a bright emerald green hue. The clasp of rubies and baguette diamonds, mounted in platinum and 18k yellow gold, was designed by Cartier at the request of Hutton’s father.

The jadeite necklace sold at auction for $24.7 million USD to The Cartier Collection in 2014. The Hutton-Mdivani necklace set the world auction records for a jadeite jewel and for a Cartier jewel. 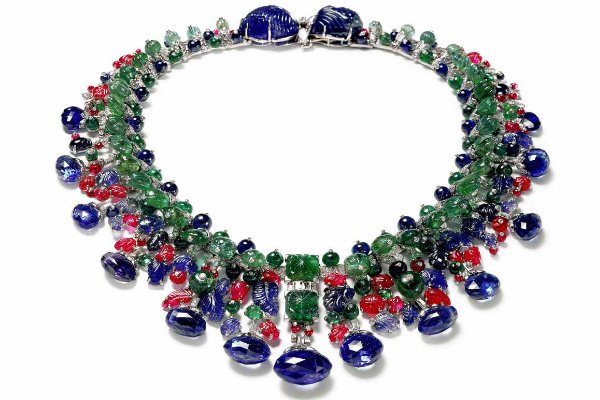 In 1901, Cartier was commissioned by the Queen Alexandra to design an Indian-inspired necklace to match an Indian gown given to her by Mary Curzon, the wife of the Viceroy of India. After this and a trip to India in 1911, Jacques Cartier began incorporating Indian stones into his French Art Deco jewelry and settings. Ultimately Cartier debuted a collection of bracelets and brooches that were made with gemstones cut to resemble leaves, blossoms and berries. This collection would later be dubbed the Tutti Frutti Collection in the 1970s.

The most impressive item in the Tutti Frutti collection belonged to Daisy Fellowes, the heiress to the Singer sewing machine fortune. In 1936, the socialite commissioned the Collier Hindou. The necklace features emeralds, rubies, 13 sapphires and diamonds (totaling 146.9 carats) and two leaf-shaped sapphires weighting 50.8 and 42.45 carats respectively. Today the Collier Hindou is owned by The Cartier Collection and is a part of a traveling museum exhibition. 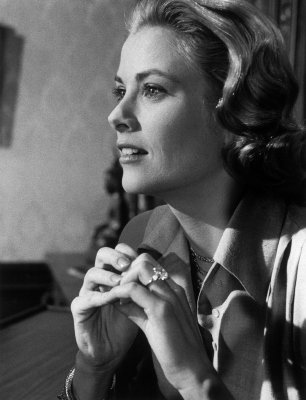 When Prince Rainer III of Monaco proposed to actress Grace Kelly he presented her with a ruby and emerald engagement ring. However Kelly upgraded to a more en vogue diamond engagement ring: a whopping 10.47 carat emerald-cut diamond by Cartier. To give the already stunning ring even more of a wow-factor, Cartier had the impressive center stone flanked by two baguette diamonds.

After their engagement, Kelly never removed the diamond from her finger. She even insisted it be worn by her character Tracy Samantha Lord in High Society. High Society would be Kelly’s last film appearance and includes a memorable moment of Kelly-as-Tracy polishing her stunning diamond ring with the corner of a bed sheet. 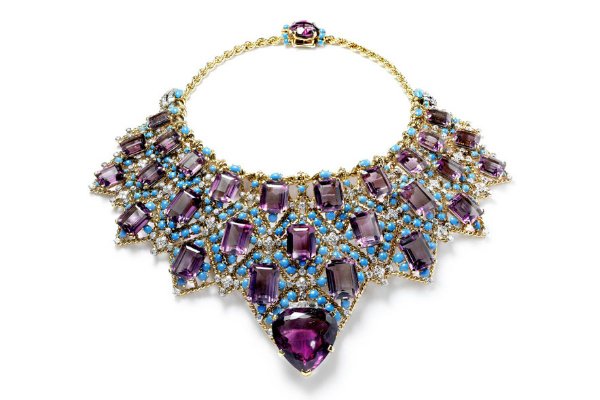 This intricate necklace was commissioned by Wallis Simpson in 1947. Simpson was the famed American divorcée for whom King Edward VIII abdicated his throne to marry. The couple were well-known jewelry connoisseurs and are credited as possessing the greatest private jewelry collection of all time, including this bib-style amethyst necklace.

Aside from the turquoise, the necklace’s stones were supplied by the Duke and Duchess of Windsor: diamonds, 27 step-cut amethysts and a large heart-shaped amethyst stone. Cartier set the stones in a gold rope-like chain. The Duchess famously wore the necklace with a strapless gown in 1953 at a gala in Versailles, France. Following her death in 1986, the amethyst Cartier necklace sold for $605,000 USD at auction. 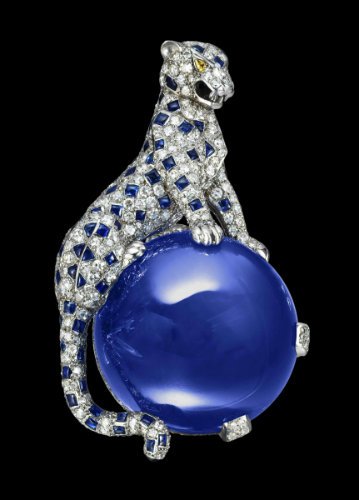 The panther motif has been a regular part of Cartier’s designs since 1914. When it made its debut, the panther was featured as an abstraction of Art Deco styling but, by the 1940s, Cartier had adopted an ornate and three-dimensional approach to incorporating the big cat into its designs. One of the Cartier’s panther-inspired jewelry’s biggest fans was Wallis Simpson, Duchess of Windsor.

One particularly noteworthy piece in her collection is the Cartier Panthere Sapphire Brooch. Made in 1949, the brooch features a perfectly round and rare 152.35 carat cabochon star sapphire. Perched above the sapphire is a Cartier panther, with diamonds for its fur, sapphire for its spots and two pear-cut yellow diamonds for its eyes. 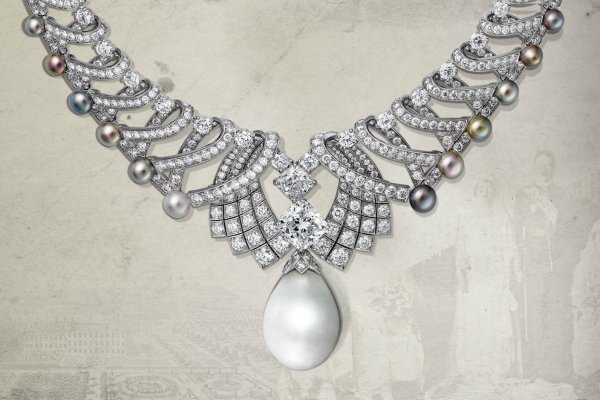 Large pearls in general are an incredible rarity in nature. It is estimated that for every 10,000 oysters harvested, only a single pearl is found. This further stresses how awesomely rare the Cartier Royal Pearl is. The pearl is a perfectly symmetrical drop-shape and weighs an amazing 166.18 grains.

The Royal Pearl first belonged to Queen Mary, the grandmother of Queen Elizabeth II. It has since passed through several generations of royalty including Princess Mary and then her son George. Cartier most recently refashioned the pearl into a necklace that can also be worn as a tiara thanks to a clever hidden hinge within the piece. With the Royal Pearl at its center, the tiara-necklace setting also includes natural pearls and diamonds, the largest being a cushion-cut diamond weighing in at 5.01 carats. The Cartier Royal Pearl itself can also be removed from its setting and be worn as a pendant. 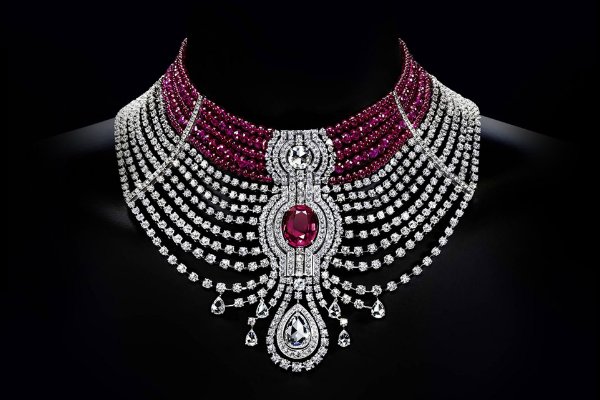 A couture choker necklace, the Reine Makeda’s design was crafted around its stunning center stone: a 15 carat oval-shaped ruby from Mozambique. Set in platinum and surrounded by diamonds the dramatic necklace took 3,320 hours of work by Cartier’s premier artisans to create. The Reine Makeda necklace was designed to drape elegantly around the neck and is a testament to the house of Cartier’s exceptional craftsmanship. 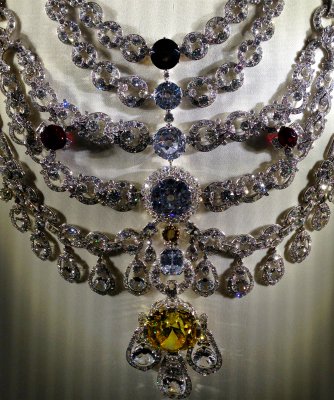 Made by Cartier in 1928, the Patiala Necklace was commissioned by and named after Bhupindra Singh of Patiala, the Maharaja of Patiala, India. The necklace included an astounding 2,930 diamonds (which range from 18-73 carats), several Burmese rubies, and the world’s seventh largest “De Beers” diamond as its centerpiece. The center stone diamond weighed an incredible 236.65 carats.

The necklace mysteriously disappeared in 1948 but the large diamond resurfaced solo (without the surrounding stones or its original necklace setting) in 1982 at a Sotheby’s auction where it sold for $3.16 million.

Then, in 1998, the necklace was discovered at a second-hand jewelry shop in London. However, the necklace was missing its rubies and diamonds. Even still, the house of Cartier bought what remained of the necklace and, over the span of four years, restored it to resemble the original Patiala Necklace with cubic zirconia, synthetic diamonds and a replica of the original De Beers diamond.